Another night out and another adventure.

On September 19th Tomm comes into the office and says, "I am ready, let's go."  Can only mean one thing to me and that's the boss wants to go sailing, who am I to say no.

Being only the second time out on the CarolMarie I asked him if he knew of anyone else wanting to go.   "Sure," he says, "let me call James."  Jim as it turns out ordered a Hallberg-Rassy in 2004 and sailed it back from Europe to the US, and went up and down the east coast.  Jim was looking for a place to move his boat to and happened to be in Salpare Bay when Tomm called.

After a quick car ride to the marina, we check in with the Habor-master and there's Jim having one with the boys, Justin and Cap'n John.  So we invite John and Jim over and prep for a quick sail up river.

I had yet to even open the reacher, so since winds were light I suggest we pull her out for the evening.  Once we got out Tomm and John helped me deploy the reacher with sheets that were way too short.  Jim steer us downwind as we hoisted the sail.

Once fully deployed I could see a couple of pin hole patches were made, so we'd likely need a new one soon.  Being that we were on the Columbia River, the current kept us mostly in place.  After a half hour of going no where, we dropped the reacher and motored over to the Island Cafe on the opposite side of the island from the marina.  John jumped off and went back to his boat (a 2 block walk) while the three of us had dinner.

After enjoying a nice dinner, we set off to motor back to the marina.  On the way back we motored back up stream toward the airport, only to find a soft grounding near the marina at the entrance to the channel (see the picture below.) 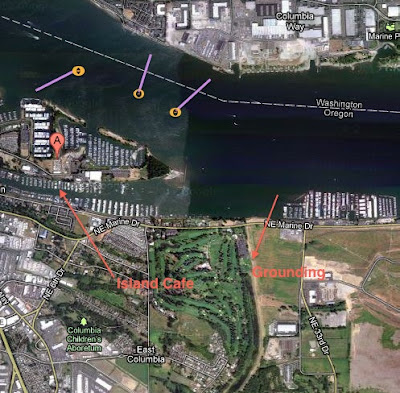 Ariel view of the island.  The marina is at A, the cafe and the grounding spot are shown.  The purple lines are where the gillnets crossed the river, and the orange circle where the buoys were at the end of the nets.

I reversed the motor and we came off easily, no worries I thought she's a full keel and it shouldn't be a problem. When we got past the sandbar on the east end of the island and back out into the channel I smelled burning rubber, then an alarm fired off.  The engine was starting to overheat, the water cooling pump belt broke.

I shut down the engine immediately and went to work raising the staysail. Once raised we had enough wind to control our drift down stream and back to the marina.

As we were sailing along I saw a strobe in the water, mid-river.  I hollered out the crew that I think it could be a kayaker in trouble we should check it out.  As we drifted closer I could see that the flasher was attached to a buoy.  That buoy marked the end of a driftnet, with the boat on the other side of the river.

I was watching for lights on the river for fishing but I didn't see what the COREGs from the Coast Guard ask for.

The fishing vessels had no lights and were under 20m in length.  A typical gillnetter is shown below. 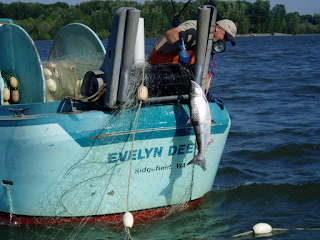 It wasn't long before one of them came over and told us where the nets were.  We tried our best to sail around them, but ended up sailing over another misunderstanding the earlier guidance given.

We were able to sail all the way to the dock, only turning the motor on briefly to berth her.  Another night, and another adventure.

Posted by S/V CarolMarie at 1:29 PM No comments:

Reading "Sailing Around the World Alone"

Well I have been reading "Sailing Around the World Alone" again for the 4th time.  Written by Joshua Slocum at the turn of the last century about being the first one to sail around the world single handed.

Slocum reading aboard the S/V Spray

I am amazed by his writing style and elegance for simplicity and self-reliance.  For example from his book when he thought he might be attack by pirates,

"Now, it is well known that one cannot step on a tack without saying something about it. A pretty good Christian will whistle when he steps on the "commercial end" of a carpet-tack; a savage will howl and claw the air, and that was just what happened that night about twelve o'clock, while I was asleep in the cabin, where the savages thought they "had me," sloop and all, but changed their minds when they stepped on deck, for then they thought that I or somebody else had them. I had no need of a dog; they howled like a pack of hounds. I had hardly use for a gun. They jumped pell-mell, some into their canoes and some into the sea, to cool off, I suppose, and there was a deal of free language over it as they went. I fired several guns when I came on deck, to let the rascals know that I was home, and then I turned in again, feeling sure I should not be disturbed any more by people who left in so great a hurry."

His little boat a gift from an aging friend was called the Spray.

He rebuilt the Spray, all 36 ft of her by his own hand when he was 51.  The book chronicles the three year circumnavigation, and is a wonderful read.   Slocum was lost at sea five year after writing the book aboard the Spray.

Posted by S/V CarolMarie at 2:22 PM No comments:

Cleaning and finally a test sail....

More cleaning, more cleaning more cleaning...... I was getting sick of cleaning the boat.  But in the end sailing her was worth the effort.  Here's her decks finally cleaned off, and the cockpit teak cleaned for oiling. 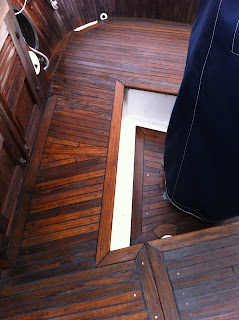 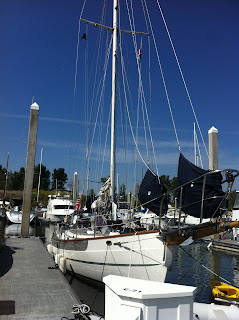 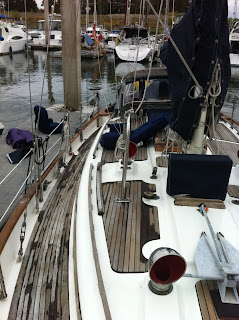 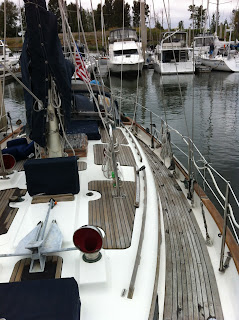 The cushions all cleaned and now bunks are made, and the cabin is cleaned. 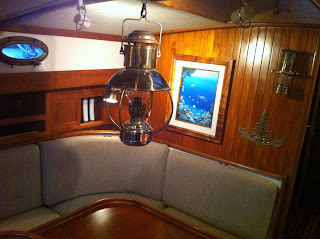 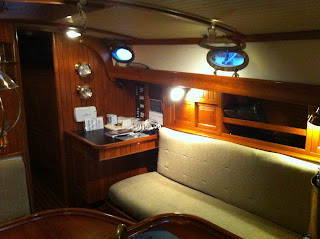 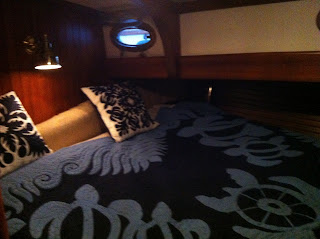 With everything in decent order we decided to go out for the day on Saturday.  Kevin Rhodes my long time friend and crew-mate, his son boom-butt Taylor, his daughter Sarah, and my friend Lee all joined Kona and I for the day sail up the Columbia River to the I205 bridge.  We left about 3:30pm, winds were 5-8 heading out of the southwest.  We motored out of Salpare Bay passing the dry-dock on the Washington side of the river before putting up sails.  We set the jib, and the staysail, then hoisted the main. 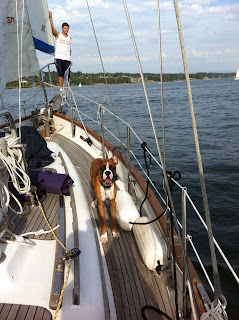 Taylor and Kona with the jib and staysails.

We were doing about 3-5 knots until the wind picked up to 10-12kts.  Once that wind picked up the Carol-Marie really took off up to 7.3knots (8.5 mph).  Which to non-sailors is not that fast, but few of them actually steer a 25 ton vehicle with no brakes.  She was flying! 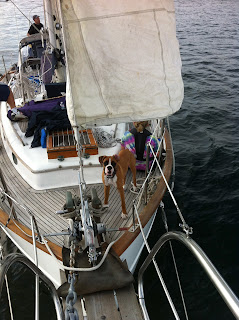 Kevin, Kona and the back of Sarah

Kona proved to be a great sailor, at as far as Lee was concerned.   Kona has a significant tell to explain his mood, specifically his nose.  You see his nose turns red as he becomes more exhausted.  About an hour and a half into the sail Kona's nose was bright pink.   It was about the same time we had decent winds.  As we turned around near the I205 red buoy, we turned from a reach to a slight beat, having to tack down river.  With two nice chairs in the cockpit, one each for Kevin and Lee, Kona had no where to lay and get rest; at least no where he saw fit.  So being the plush prince of the decks he decided to take advantage of the tacks to steal the chair of the lee-ward side of the tack.  By stealing the lee-ward side, he was always against the edge of the cockpit as the boat heeled and he wouldn't slide out of the chair.  I noticed Kona seated in the chairs, but never saw how he was getting in them.

About mid-way back, Lee said to me, "Terry you've got an excellently trained sailing dog."

"yeah," Lee explained, "Every-time you say, 'Helm's Alee', he gets up.  Then while we are bent over the wenches controlling the sails he sniffs our bottoms, until we turn around then takes the chair of his choosing."

I guess some animals too are born sailors.

They say the happiest times in a boaters life are when they buy a boat and when they sell a boat.  Well we bought the Carol-Marie this weekend.  She is a Hans Christian 38 MKII built in 1980.  We are her third owners, and she has not been in salt water for more than 3 weeks.  She has been in the Columbia River most of her life, sitting idle, waiting to be used.  To paraphrase the old saying, 'The saddest sight in the world is a boat rotting in harbor.'  But that's what she was.....

We spent the first three days cleaning out the boat.  12 half filled jugs of motor oil all expired, expired flares, expired fire extinguishers, etc.....  Seaweed hanging from the port-lights, old socks, old shorts, old toothbrushes, and bunion pads....  Three pick up trucks full of junk, thrown away or place in a pile to sell at the swap meet in two weeks.  The boat raised out of the water an additional 2 inches. We clean out the cabin area, washed the cushions, put them back into the boat, so now she is clean inside.  Thanks to Charing and Cheryl for helping out (actually doing most of the interior cleaning.)  I promised I wouldn't post their pictures here. 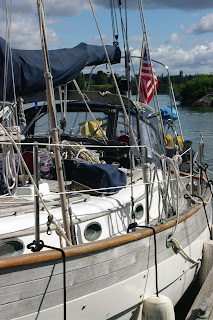 She needs to be cleaned, brightwork done, new decks, new hatch cover, new running rigging, new sails, the list goes on and on and on....  But we are two years away from sailing her to Hawaii, which has been our plan all along.  Stay tuned more pictures to come.

Posted by S/V CarolMarie at 1:48 PM No comments: