I literally raced to the boat on the 23rd to try to get out on the open water and down to Government Island's East Dock before dark.   I loaded all my gear into the boat's wagon the night before, and as I left work I received a text from Ray and Alicia that they were leaving, heading out at 3:30pm.  I drove home as fast as I could, changed clothes, and dragged the wagon out to walk to boat.  It was 5:00pm before I left the house.  I got the boat ready to leave 30 minutes later.

The Columbia River was pushing me backwards about 2.5 knots, while the speed in the water was 7.1 knots.  An hour later I had made it to the I-205 bridge, and darkness was setting in fast.  I received a text from Ray and Alicia that the Power Squadron had decided to stay there too and wasn't a slip available.  Ray text'ed that I likely have to raft up to them.

At 7:45pm I finally reached East Dock.  Paul on S/V Openwater had put a large orange spinnaker on his mizzen mast, backlighting it for a visible marker.  As I came up the finger of the dock a spot had been cleared for the Carolmarie, and with assistance from everyone on the dock we tied up. 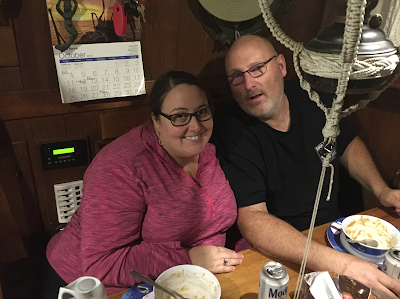 Within an hour of arriving Alicia had dinner ready Rowena and myself.  Paul joined us as well with his own dinner.  We went into the cockpit to and practiced music after the meal.

The next morning it was a beautiful morning, more of the SIYC boats came in,


The club had a great dinner that night, followed by merriment on S/V Rowena.

The next morning, hang-over cured, I motored back to Hayden Bay.   It was a great weekend, but now the rains came down with a vengeance.  Walked home in the poring rain, wagon in tow.  As I came close to the house the fire tree appeared, and the rain stopped briefly. 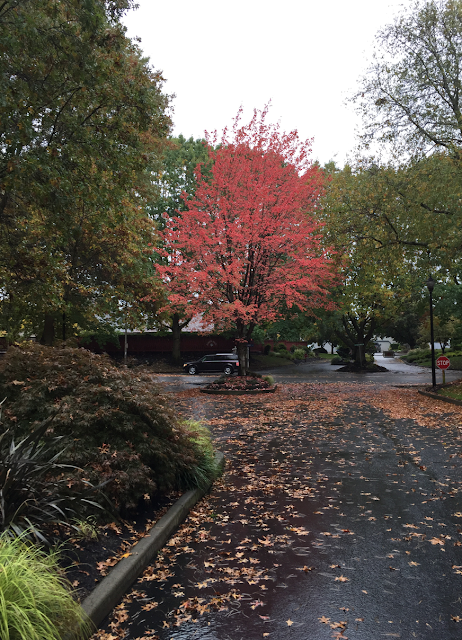 I got home, took a hot shower and put everything away. Another Halloween Cruise done.