Through a charity auction we got tickets to go on the Atlantis submarine tour in Waikiki, Oahu.  The sub was the 64 passenger Atlantis XIV.  According to the tour guides on the ship it is the world's largest non-military submarine capable of going down to 850 feet.   The restriction for safety limits them to 125 feet because of the need for safety divers who are on call at the surface.

We made reservations for 11:00am over the phone for the tour, for my grandson, my wife and myself. At 10:55am we were running down the Hilton Pier that was in front of the Hilton Hawaiian Village Ali'i Tower.  Although the website and the brochures both said be there 30 minutes early we made it to the excursion boat with minutes to spare.  I guess its Hawaiian time.

Before getting on the boat of course they take a family photo that they try and sell you later.   Once on the boat the crew went through a safety briefing and video.   The briefing and the video were done in the air conditioned lower part of the excursion boat.  Then they ask those who are prone to seasickness to go to the top of the boat under the large bimini.

The excursion boat takes us out about a mile and half to the site where we will board the sub.  There are two small blue tugs that are service vehicles for the two submarines.  Since the subs only travel about 2.5 to 3 knots under their 85 HP electric motors the two small tugs pull the subs out to the area every morning and back in the evening.


When the excursion boat got out the site we watched as a air bubble was released from the sub.   Since the sub had no view of the surface an air bubble is released to show where it will come up.   Once the air bubble is seen, hopefully with no other boats around the tugs signal the sub that it's okay to raise through a radio.   The sub then surfaces and the tourist get on. 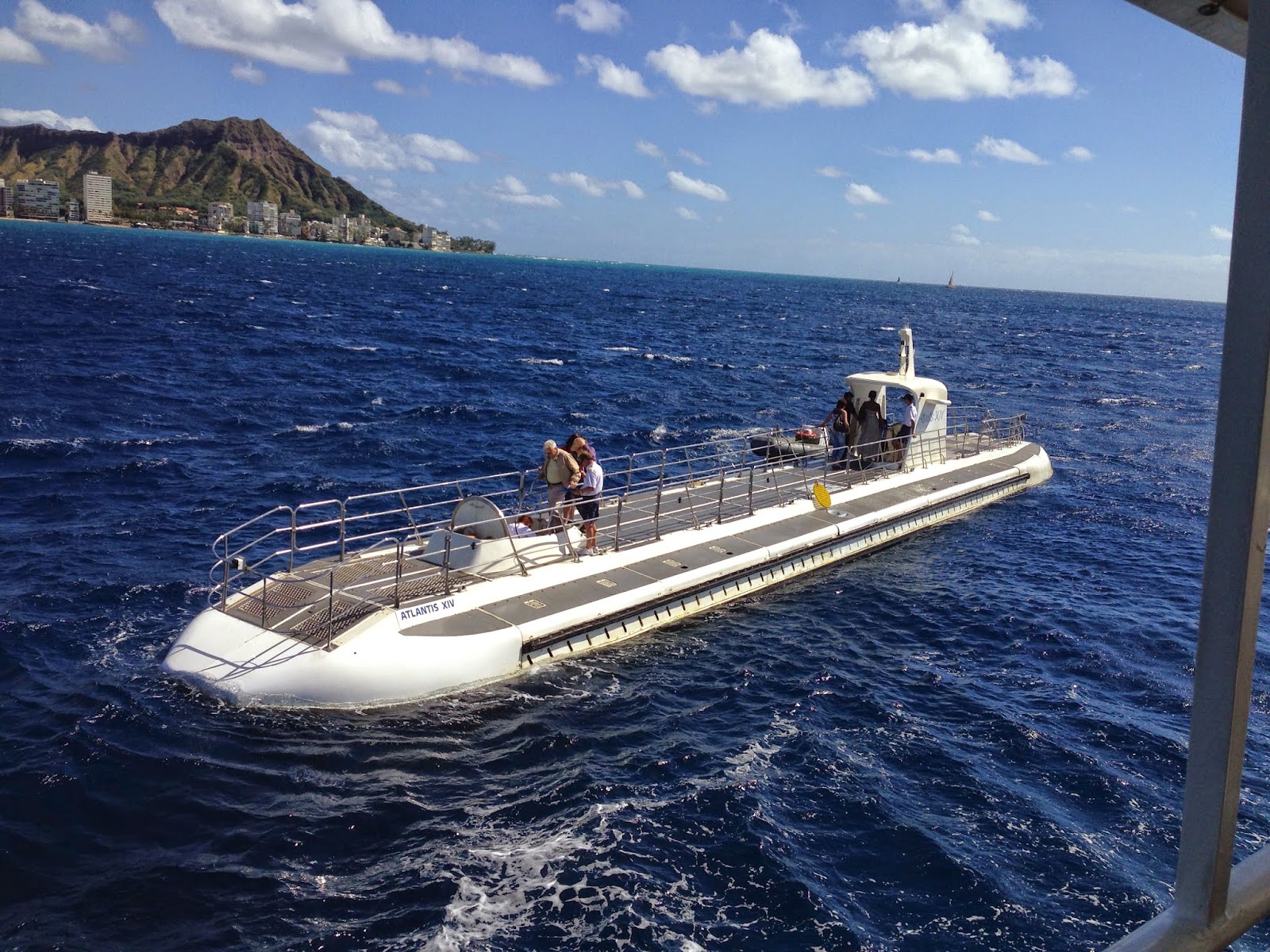 Once you climb down the ladder/stairs into the sub there are two rows of bench seats each facing outward with a window in front of every two seats per side.   The color of the sea, and the sunlight shining through it make everything in the sub have an aquamarine green tint to it.  Forward facing is the captain/helmsman seat at the bow and the first mate is in the stern of the ship.   A large convex porthole enables the helmsman to have a 270 degree view of the world, blocked by the top and the sides of the boat.

Once the hatches were closed the tour began.  The bottom of the ocean had cinder blocks with marked tags that enables the helmsman and the tour guide to navigate under water.  We first submerged to a depth of 45ft.  Soon fish appeared out of no where circling the sub as we descended.

The sub passed a couple of man made reefs from the University of Hawaii, but soon passed a sunken ship which had scuba divers on it.

There were planes too that had sunk during a hurricane.

At one point we had gotten down to 103ft, where there was a ship that had sunk because of a fire on board.   The crew used part of the cargo of soy sauce to try to douse the flames before it sank.


Once the tour was over the sub ascended, and we boarded the excursion vessel back to the pier.    The entire trip, pier to pier was about an hour and a half.

Overall the tour was great for adults, while Ezekiel (who is 6yrs old) was a little board, he really loved the experience.  He talked about it for the rest of the day.  I would recommend anyone who hadn't been on a submarine or hadn't scuba dived to take the tour, it's money well spent.

Posted by S/V CarolMarie at 9:38 AM No comments: