It's been 17 yrs since I started here working for a high tech company in Portland, and this week it is winding down.  My view of the world is changing from one of a cubical to a wider view. 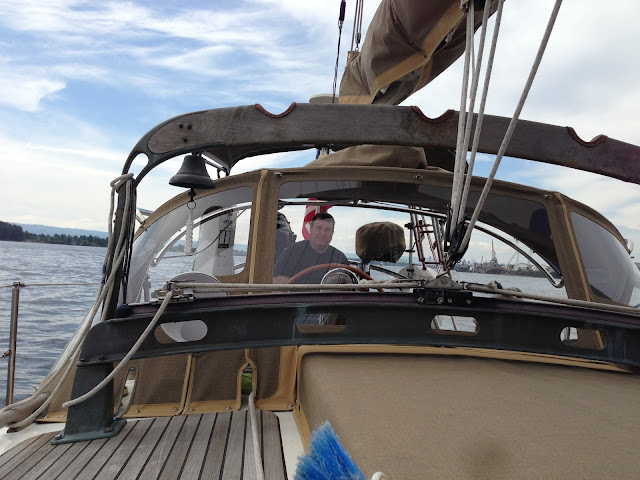 I think I will have fun with the new view..... but I will miss many friends.

So this year the crew of Terry, Charing, Cheryl, Michelle, Dean and Christa register for Summer Sailstice 2013, now we were one of 19000 boats to register for the national event. (http://www.summersailstice.com/about-sailstice). We set out venture around Sauvie Island once more some 48 miles overall.

Sauvie Island has over a thousands of acres of lake, sloughs and wetlands that are set aside as bird and wildlife refuges. Long, sandy beaches that fringe these refuge areas with the island's intricate waterways provide a remarkable natural setting.  On either side you'll see many houseboats, floating homes, fishing camps, and even float planes.

We departed Salpare Bay about 10:20am heading for the I-5 bridge in Portland.  Reaching the bridge we called to find out we had 68ft of clearance under the bridge and needed 59ft.  Approaching the Vancouver Railroad bridge we hailed the operator and had to only wait 20 minutes for them to open the swinging trestle. From there we steamed to the head of the Willamette River doing about 8.2knot SOG.  The current pushed us fairly fast as we neared the mouth of the Willamette.

Motoring up the Williamette we saw typical recreational traffic going back and forth through the top stretch of Sauvie Island.  The real treat of the voyage and my favorite part is the back country waterway of the Multnomah Channel.  The distance from the Willamette River, down through the Multnomah Channel to St. Helen's Oregon is about 19 miles.

My biggest concern about the journey came next as we approached the new Sauvie Island bridge. The new bridge was constructed in 2009 while I was out of the country and boatless.  I had never been under it and didn't know the clearance.   Charts said we had 72ft at mean low tide, but one can never be certain.  Looking at the indicators on water level on the pillars of the bridge showed we had 69ft, enough for us to go under.  As we motored slowly along it was fun to see all the house boats, and what had changed since my last journey in 2005.

Here's a few pictures of the homes along the channel. 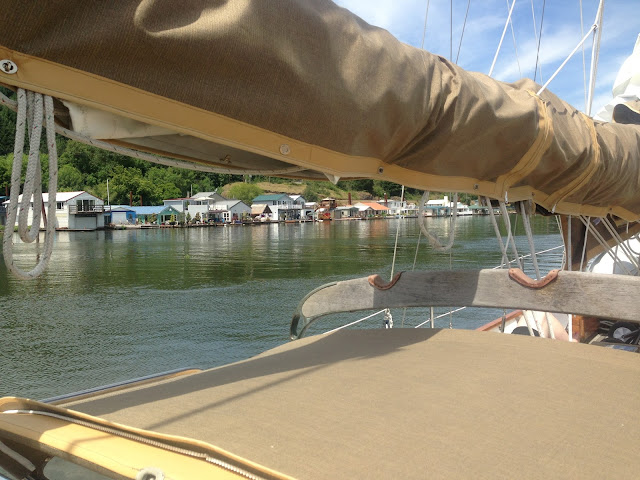 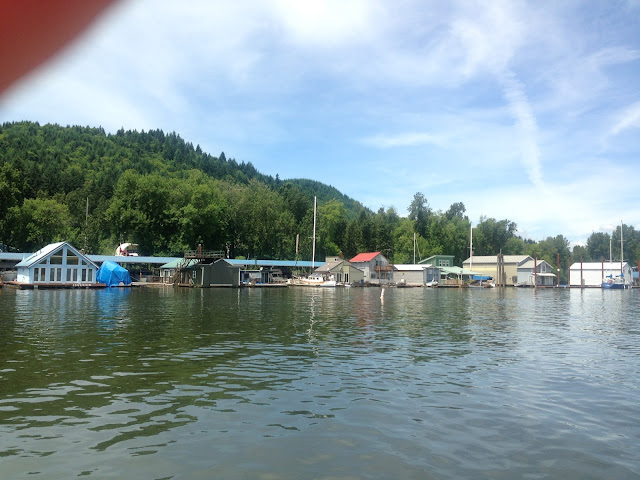 It turned out except for the new bridge very little had changed. We passed through Rocky Point about 12:30pm and I was getting hungry.  Christa, Charing, and Cheryl went below to make lunch.  Michelle soon followed.  They brought up one of the best sandwiches I had ever tasted in my life along with a noodle and veggie salad.  There is nothing better then watching the scenery pass on a beautiful day while eating a gourmet lunch. I think the local fishermen were a little jealous. 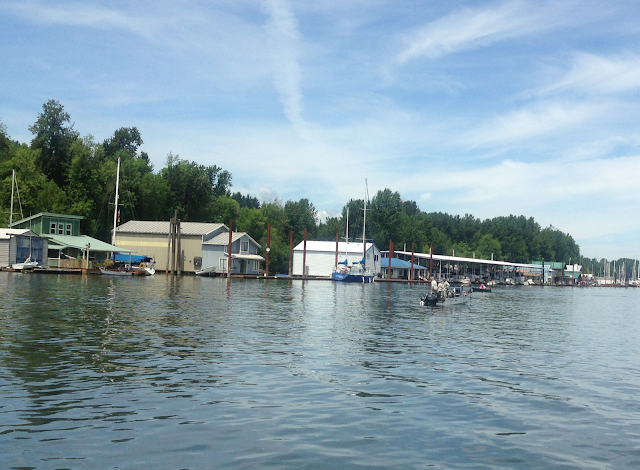 By 2:30pm we approached the scenic part of the channel near Coon Island.  Coon Island is about 16 miles down the channel and is a state marine park. The small island on the channel has docks to tie up on either side.  As you approach the island you see this remarkable old barn the looms over the levy. 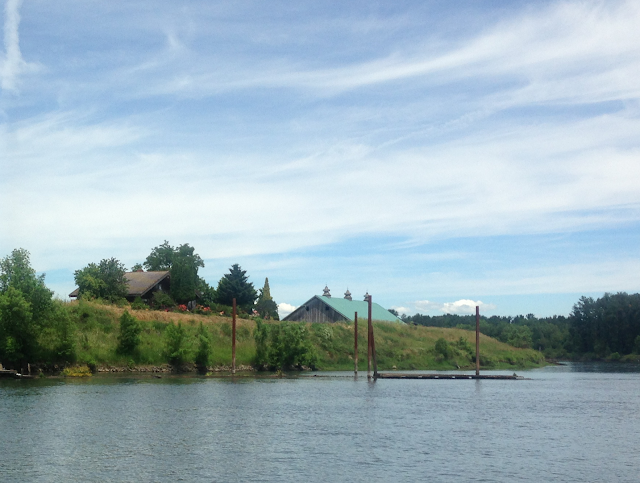 Once on the other side of Coon Island we were about 5 miles from St. Helen's. 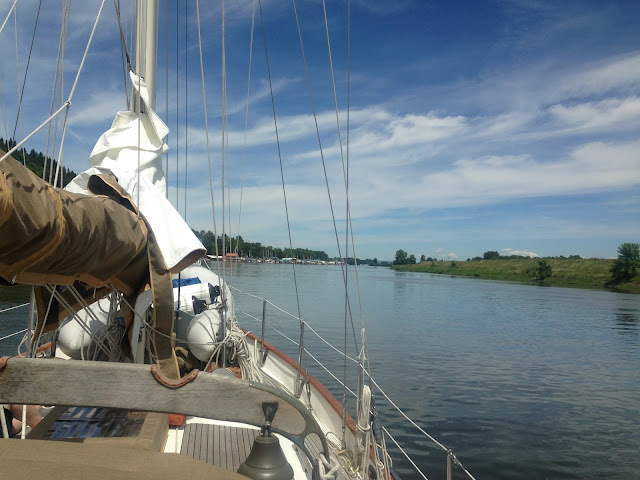 We approached St. Helen's Oregon about 3:20pm, and I wasn't prepared with my chart plotter.  I used Navimatics software on my iPad with a Bad Elf GPS.  I needed them to guide me over the sand bar that stretches between Sauvie Island and  Sand Island.  I have actually watched many boat run aground through here.  For some reason the GPS wouldn't connect to the software.  I slowed the engines to an idle to see another sail about approaching us from St. Helen's.  The approaching boat was the S/V Mach4 a 32ft Hunter from our marina.  Her slip is directly behind ours at the marina.  The Mach4 turn into the sandbar, and led the way through for us.  We emerged from a depth of 10ft (we draft 6ft), to 22ft was we got into the current again of the Columbia.  Once we turned we saw the familiar small lighthouse of Warrior Rock, on Sauvie Island. Warrior Rock is ledge of basalt that emerges out of the Columbia.  According to the Oregon Boaters Guide it's named by Lieutenant William Broughton who was dispatched by the Vancouver expedition to explore the Columbia. Passing the rock in his longboat in October, 1792,  Broughton found himself surround- ed by 23 Indian canoes with the men all attired in war garments. Though no battle took place between the native Americans and Broughton the name stuck.  A small light house was later built on the rock for marine navigation.

From here it's 16 miles back to Kelly Point to close the circumnavigation of the Island.  The river's current now worked against us as we made 4.6knots SOG on the return.  We were passed by three large cargo vessels going into the Port of Portland for loading and unloading. Most of the crew had been lying in the sun sleeping through this leg of the journey.

By 4:50pm we crossed our path at Kelly Point having completed our circumnavigation.  There was no wind unlike other years so no sailing actually occurred.

At 6:05pm we requested our passage through the Vancouver Railroad Bridge, and waited 40 minutes for trains to pass. The S/V Mach4 caught up with us, as we went through the Interstate bridge.

At 8:20pm Denise our slip neighbor appeared from her trawler to help us tie up. Soon Jim and Linda from S/V Ranidan and Capt John from S/V Doghouse were there to help bring us in as well. Keeping with the tradition we opened a bottle of Bushmills Black to toast the return.  Thanks to Michelle for donating the bottle to the boat during the christening. We brought down the Sailstice 2013 flag from the mast and each signed it.

In twelve years I have watched Sailstice grow to over 19000 boats which was pretty cool to be one of the first.  I lost the original yellow Sailstice flag in the property of the divorce, but it would have been awesome to show.  Everyone had a great time, and it was an awesome day.  Now the countdown begins to Sailstice 2014!!

Setting up the hailer....

I was thinking about how I could mount the hailer speaker on the boat.  The hailer speaker is used for the fog horn and the loud speaker for the VHF radio.   I have always had good luck with the Rail-Mount Boat Hook Pole Holder from United Yachting.  These can be ordered at WestMarine or your local chandlery.  The bottom part of the bracket makes a nice mount for anything round.

So I purchased a hailer speaker from Kim at www.columbiamarineexchange.com.  Then drilled holes to make the mount patterns of the boat pole holders.

The next step is to tape the nuts in place so they won't fall into Davy Jone's locker.  Next I soldered the wires from the hailer to speaker wire and heat shrunk the the wires to seal them.

Next I mounted the the device to the TV antenna that was on the Bimini rail. 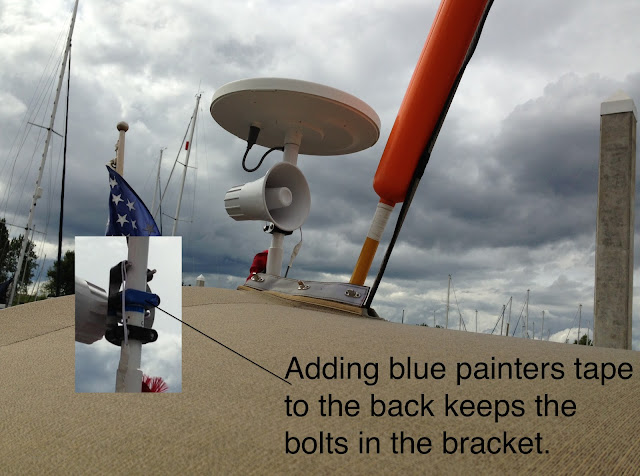 With the three boat pole mounts attaching the speaker to the antenna riser it is certain not to move while under the wildest of waves or conditions at sea.

Next step tomorrow is to route the  cable to the VHF.  We purchased the Standard Horizon GX2150 from Columbia Marine Exchange.  It has the automatic hailer and fog horn.  Our intent is to use the speaker as the hailer for the fog horn once  at sea.

Posted by S/V CarolMarie at 9:18 PM No comments:

After returning from Israel it has been a busy couple of weeks.  First our daughter Katie graduated from  high school, and a bunch of family flew in to see her walk across the stage. 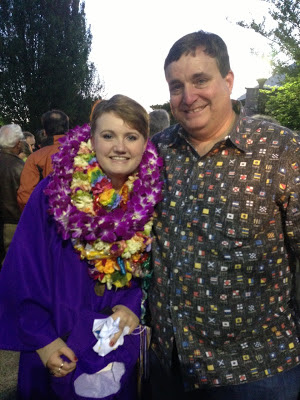 Immediately after, well actually the next day my wonderful wife turned the big five Oh..... so being hawaiian meant we needed to have a party.  Since everyone was here anyway why not have it on the boat.  Which we did.... 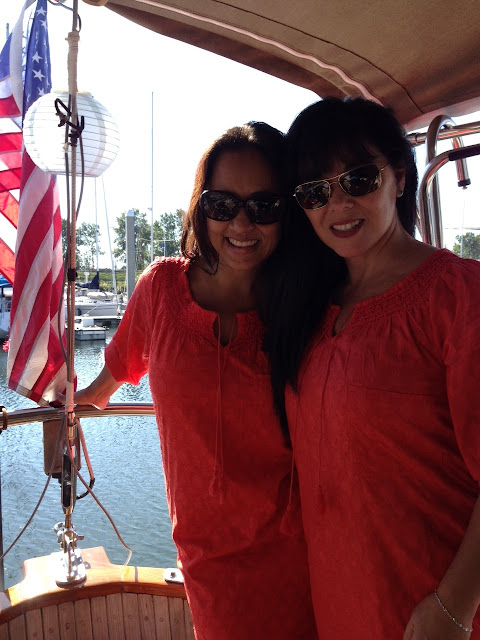 Birthday Girl and her sister. 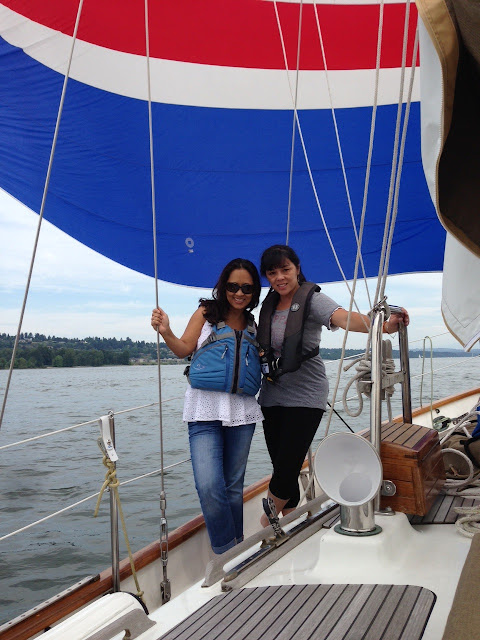 Birthday Girl and her sister on the CarolMarie with the spinnaker up.

Of course the grandsons were both here too. 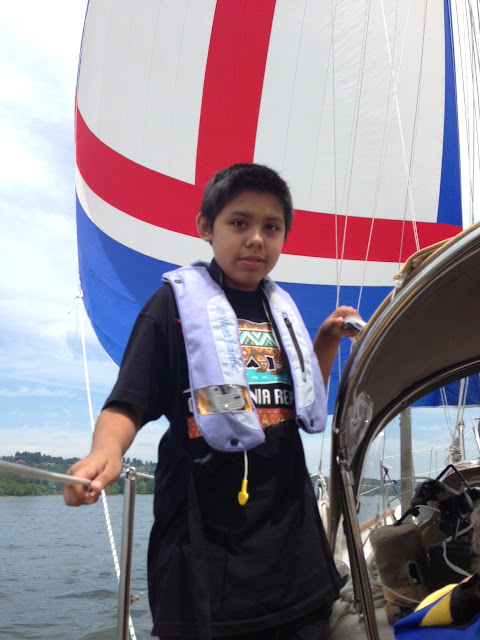 Quin with the spinnaker up 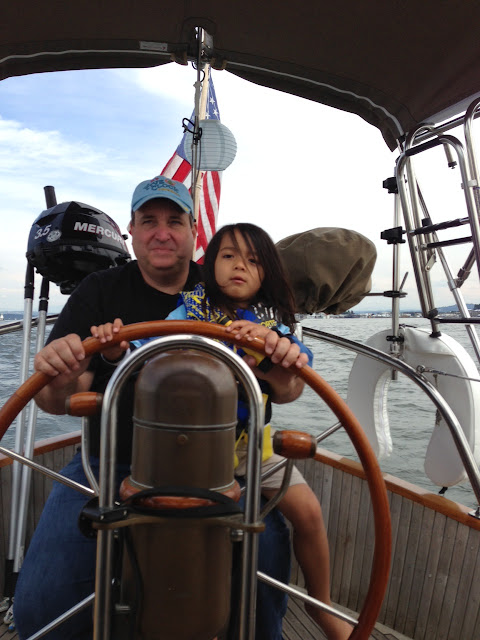 Eze piloting the boat with his Papa Terry

All together she had  a great birthday, and she's great looking.... 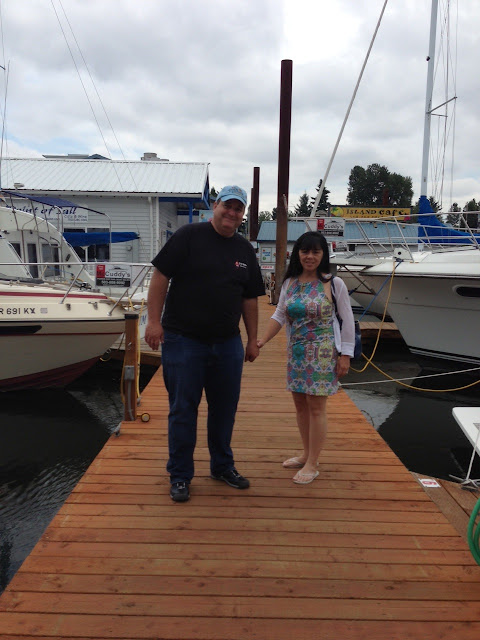 One of the best parts of the last few weeks was having my mother over to enjoy it all.   It was awesome to see her out on the water with us enjoying it as much as I did.... 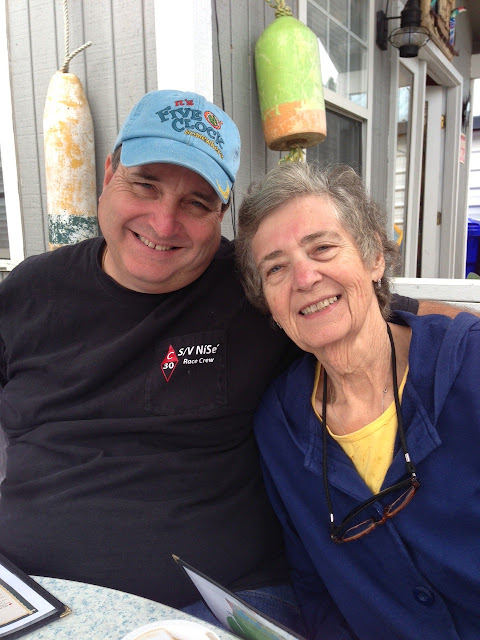 Posted by S/V CarolMarie at 9:16 AM No comments: