Charing, Polly and took the Carol-Marie out for a day sail on the Columbia.  Needless to say the docks were empty because the rains in the Northwest have begun.  Despite the low water levels we were able get out of the marina without grounding. 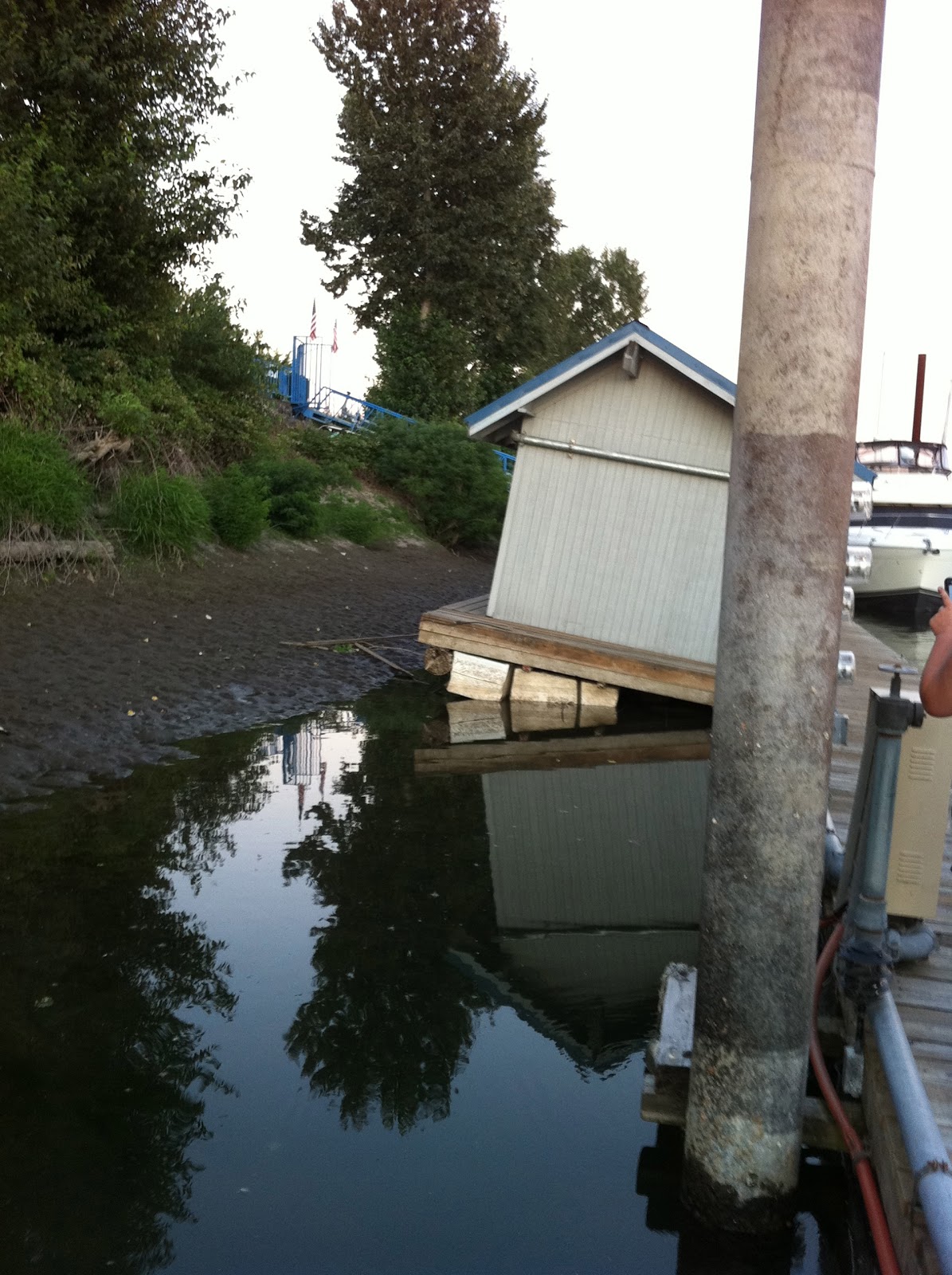 Just to show how low the water levels were.

Almost immediately we were soaked from the rain, sailing under jib alone.  We reached 6.5 knots moving against the current aided by the incoming rain storms and the pressure that accompanied them.  The river turned from a mirrored, reflective black to a sea foam green within minutes feeling the cold rain.

With no cover, I sat at the helm being pelted in the face with the rain throughly enjoying life, certainly in my element.  Just getting settled, satisfied with the rain in my face, we reached the I-205 bridge and turned back to the marina.   The time had passed and it was the closing day of the Island Cafe, cheap drinks to warm the soul, and freeze the bones.

Just after jibbing the rain stopped, and blue clouds opened up above us.  Still drenched, Charing went forward and snapped a picture of Polly and I. 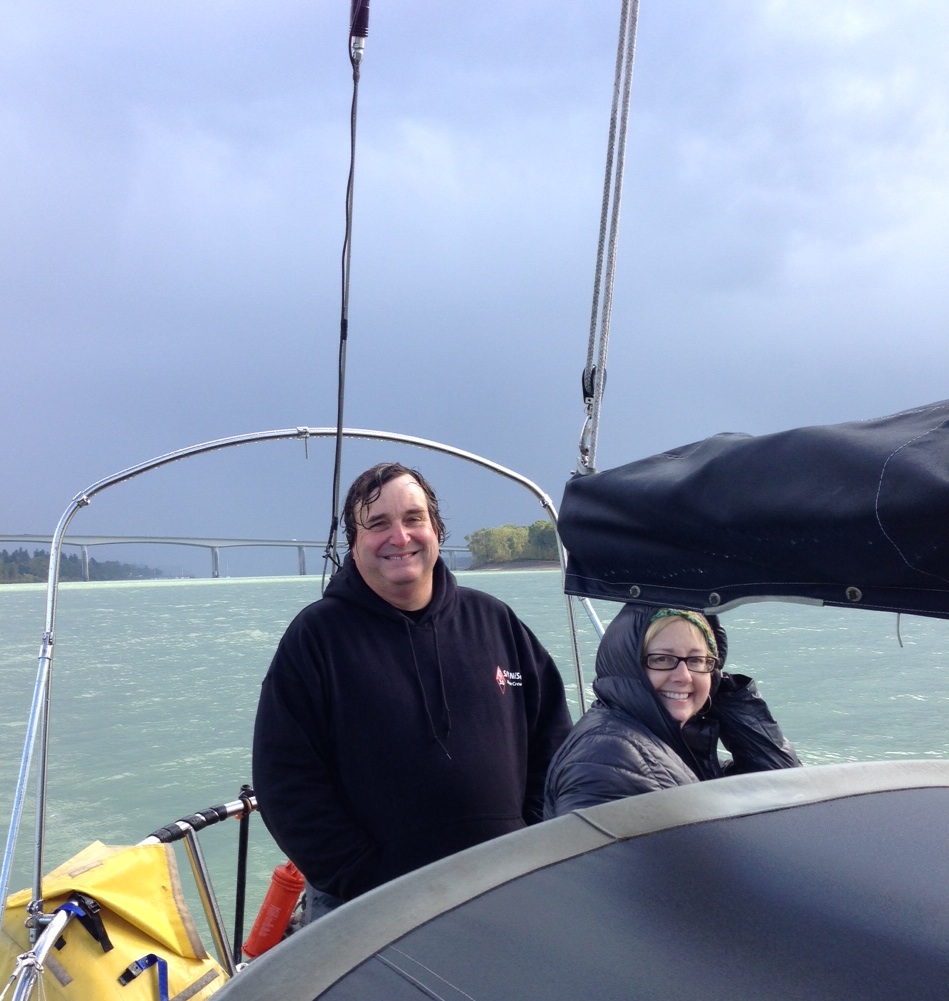 Terry and Polly under blue clouds, I205 bridge in the back above the green Columbia.

We put the boat away, tied her up good and headed off to close the Island Cafe.  The Island Vice drinks are a secret mix of adult beverages, blended together with ice, and various flavorings.  Throughout my numerous visits to the place researching the mixture, the only think I know for certain is it only takes one or two to change your perspective on the world in a good way. 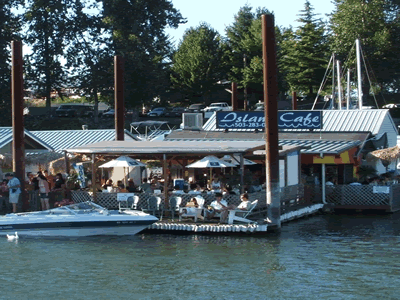 Jim talked to me about delivering his boat S/V Ranidan while we were out a couple of weeks ago and then again at the swap meet too. Ranidan is a 40' Halberg-Rassy that is nicely maintained. 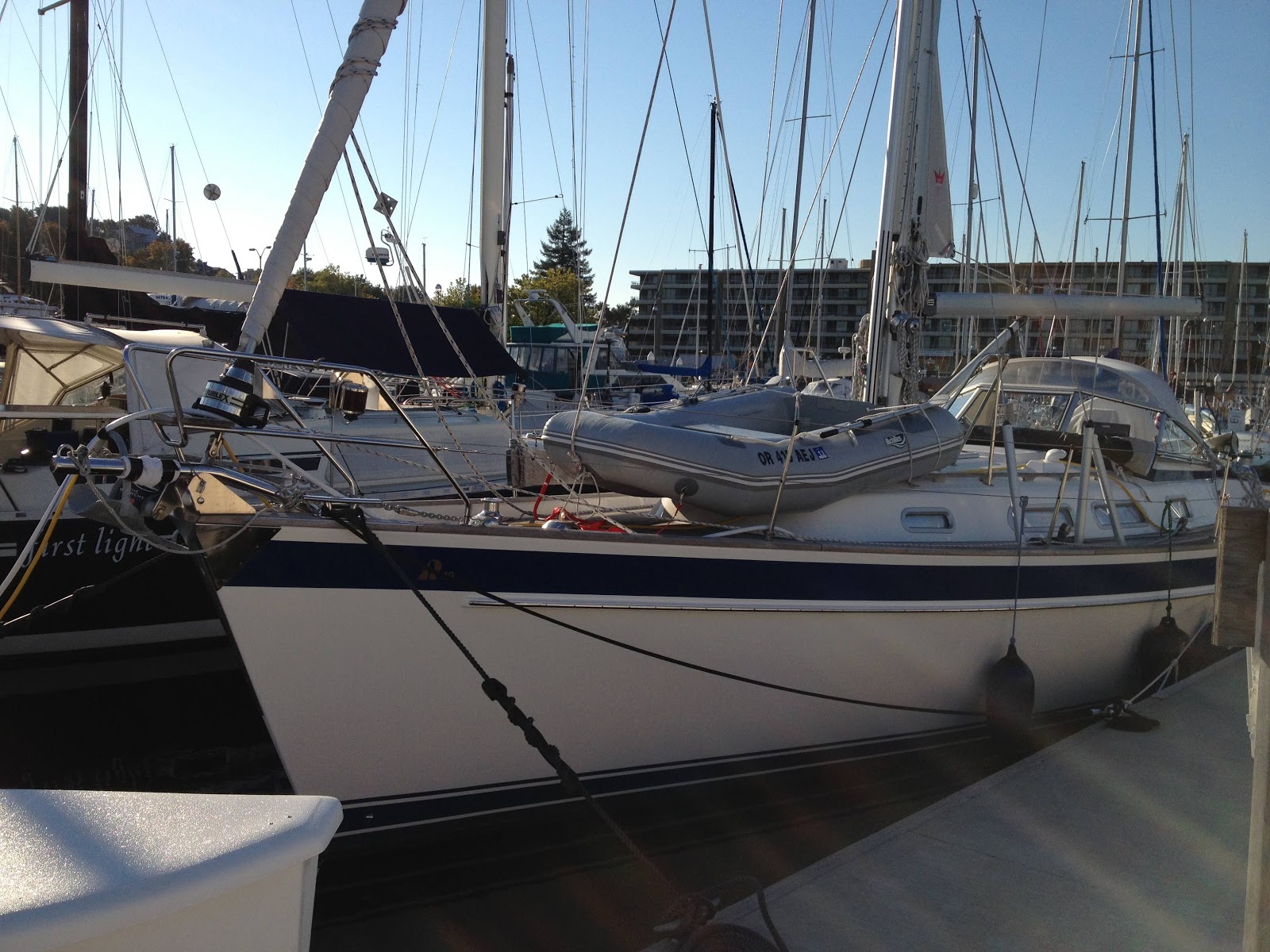 We left Portland around 3:00pm and arrived at Shilshole Marina about 7:00pm that night.  We stopped for Cuban Sandwiches at a great roadside stand outside the marina.  Bringing them back to the boat made a wonderful dinner.  Jim and I went over the plans for the next day and turned in early for the night.

I woke up at 5:00 am missing the dogs, they usually are ready to dog out about this time.  I went for a long walk in the marina to allow Jim to sleep.  After an hour of walking I returned to the boat and read for while, eventually falling back to sleep.  Sleep is always better for me on a boat, regardless of being docked or not.  There is something about the security of the surrounding, and the fact you feel the movement of the world that gives me a since of security.

At 7:20 I heard noise and felt movement.   Jim was up and getting ready, I grabbed my gear and headed for the showers, while Jim returned the car and checked out of the marina.  When Jim returned, we added fresh water in the tanks, motored over to the fuel station and pumped out the holding tank.

By 9:30 we were leaving Shilshole for Puget Sound, headed for Port Townsend, Washington. We went along Whidbey Island toward the Straight of San Juan.  According to Wikipedia, "Whidbey Island is the largest of nine islands located in Island County, Washington, in the United States. " 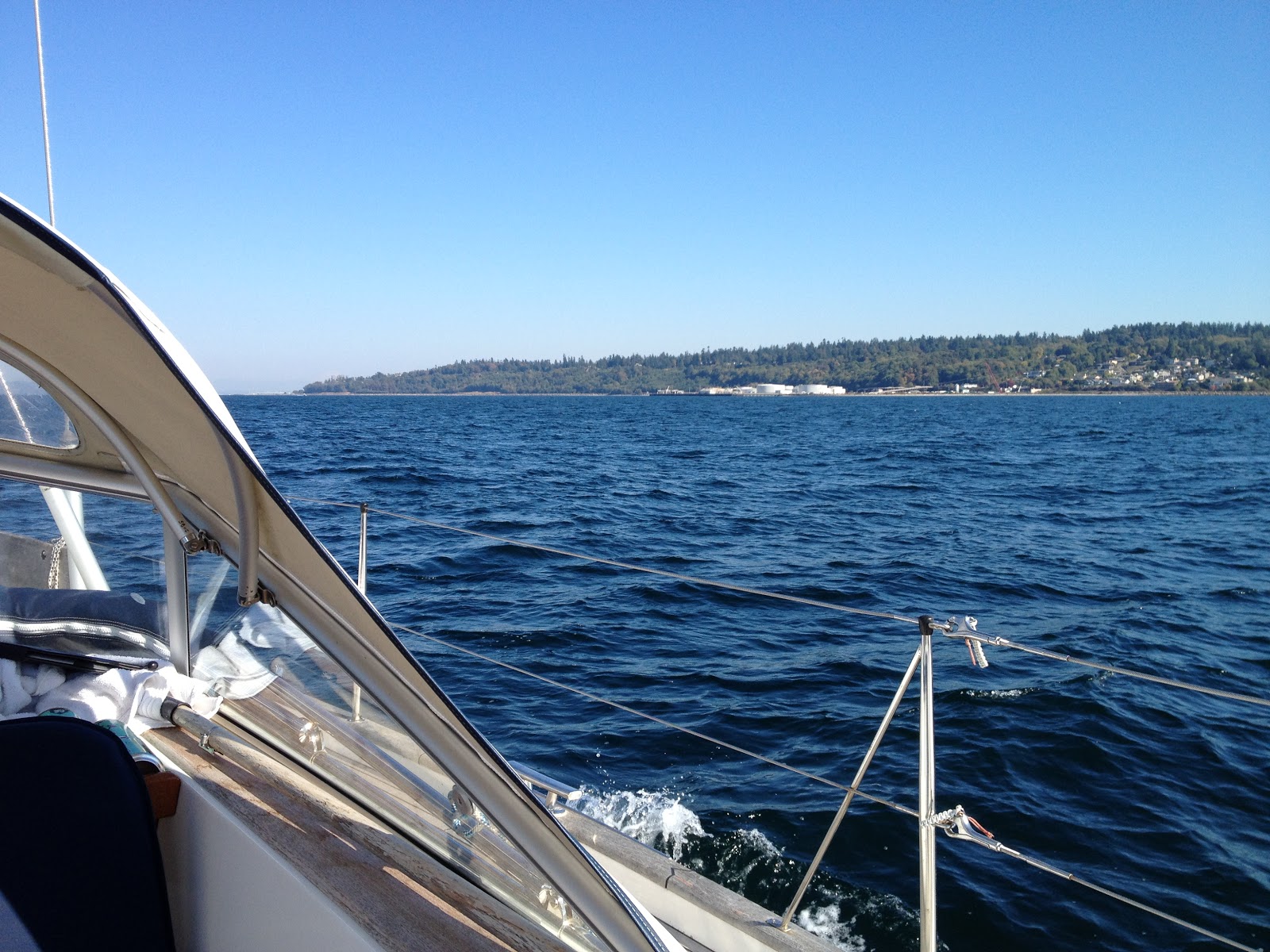 We motored most of the day trying and hoping to make good time against the currents and tides, while dodging other sea going traffic.  By 5:30 we reached Port Townsend with Port Angeles still another 2 hours away.  We decided to stay in Port Townsend, home of the Wooden Boat Festivals.  Pulling into the Port of Port Townsend marina I got a real appreciation for the beauty and character of the wooden boats.  They were everywhere in the marina and many of them reminded me of Lin and Larry Pardy's Talesin.  Pulling into the marina we came along a tall ship that so meticulously maintained.

We found a slip and went to check in, grab dinner and walk about the town. 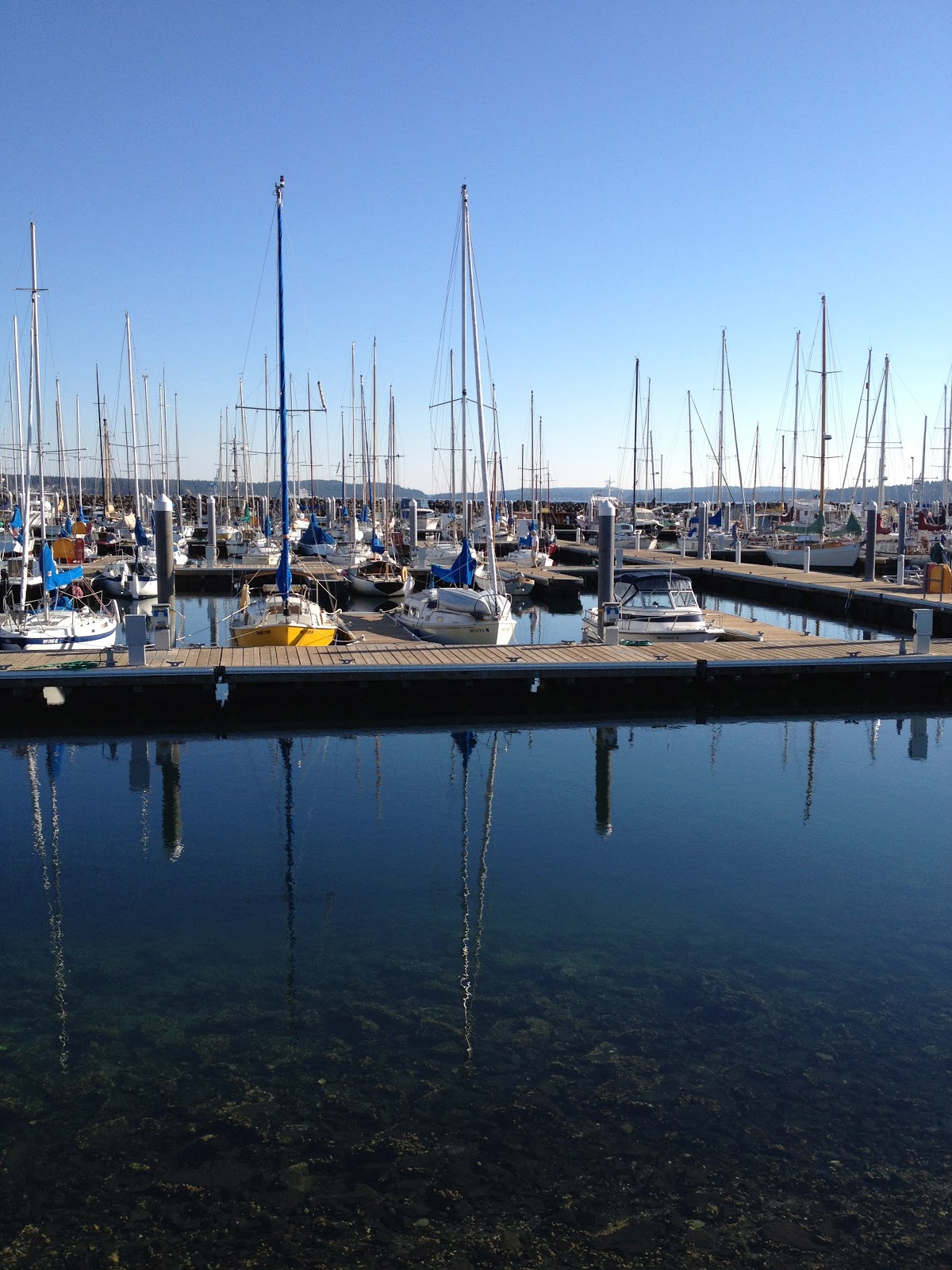 Port Townsend is a city with a great deal of character and characters.   The downtown is full of historic building, and pleasant tree lined sidewalks. 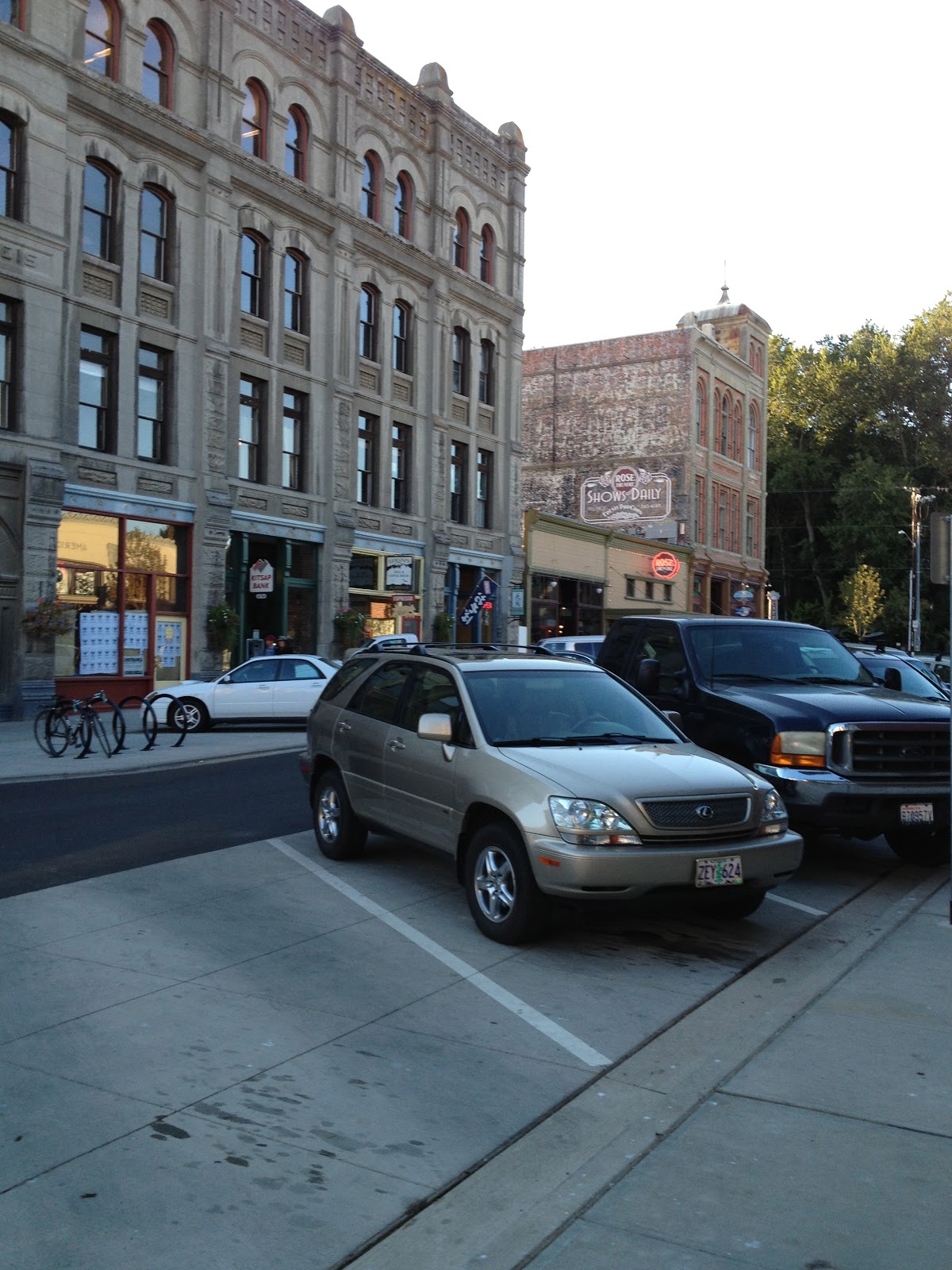 Along our walk we came across a human power, mud bogger being towed on a trailer; not something you'd see every day. 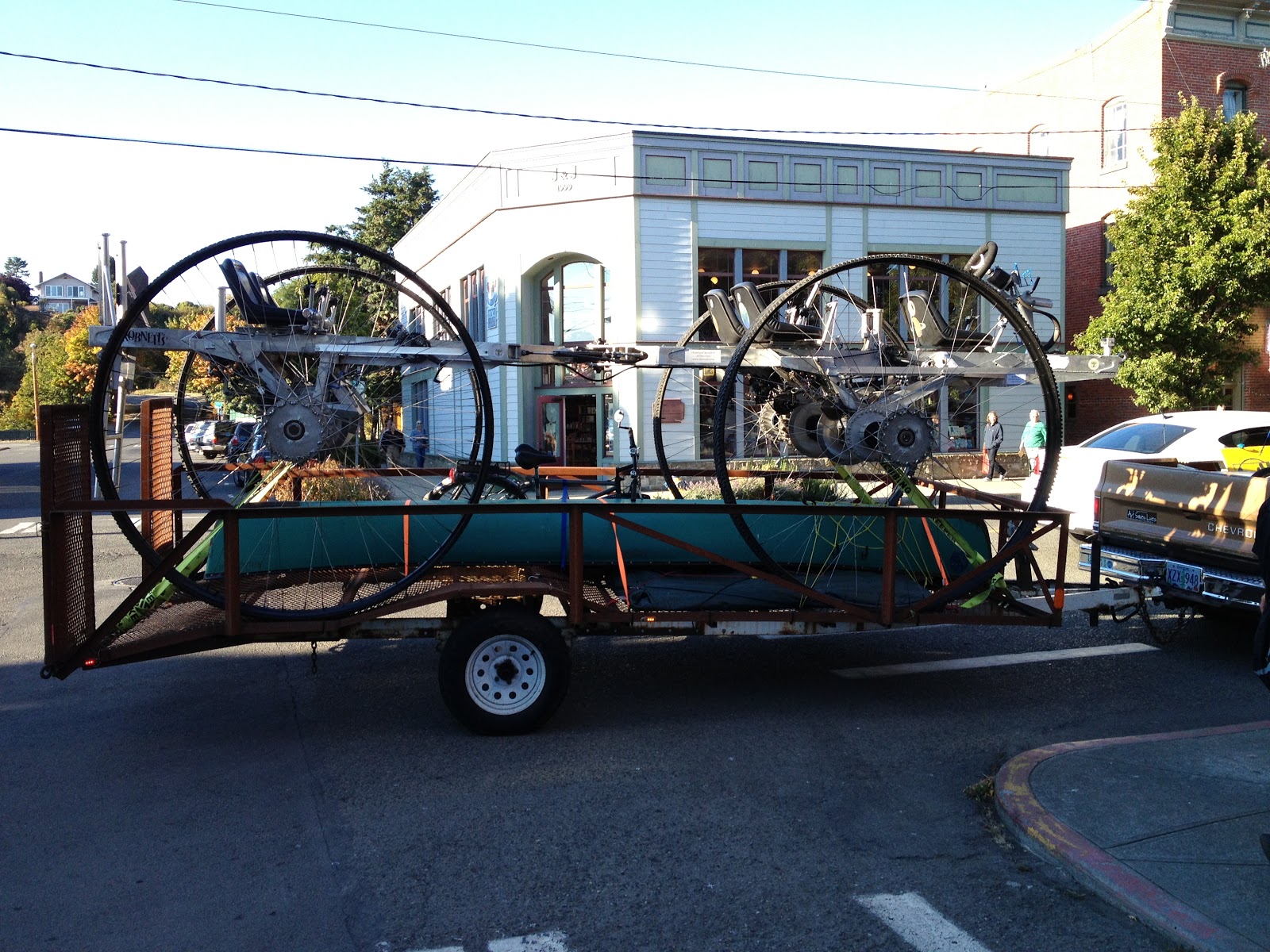 The mud bogger actually seats five including the driver, all with pedals connect to the drive train.

Along the way we passed by a place that looked great for dinner and turned out to be so, Dos Okies. 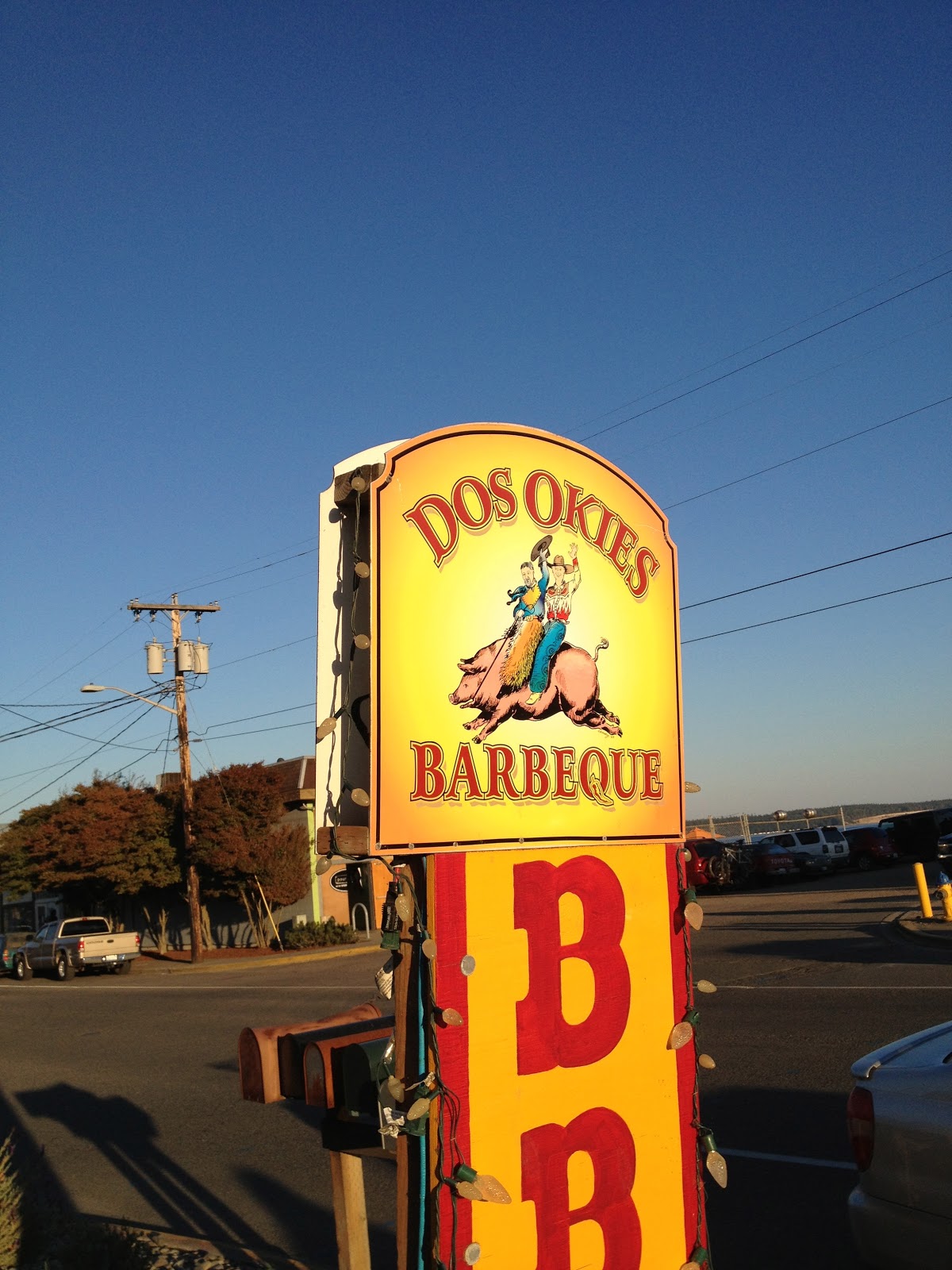 Dos Okies was originated by two Okies that decided to drive out to the west coast back in the 70's.  When they went the wrong way they hit the coast line and decide to stay and sell BBQ.  Today, they are still there in a little roadside restaurant, where one Okie, serves, cooks, and waits on tables.  I don't know where the other one is.  The BBQ was excellent and very filling.  We needed a good meal after our 2 mile walk about town and we needed an early start to reach Neah Bay the next day.


Morning came early and as soon as we could see we left Port Townsend to head out to Neah Bay.   The currents caused eddies all over the inlet making getting out to the channel a slow process.   The sunrise along the Straight was worth the long ride to channel, a wonderful pink sky backed the light houses as we fought the eddies.  Leaving the inlet and the marina we also had to navigate our way through the clusters of sea otters laying on their backs munching on their morning meals.  It's something to see them, floating on their backs, watching the boats go by as breakfast entertainment. I realized something about Jim, through the morning and mid-day - he's an excellent cook.  Jim's salads are outstanding, and he makes a mean breakfast coffee. 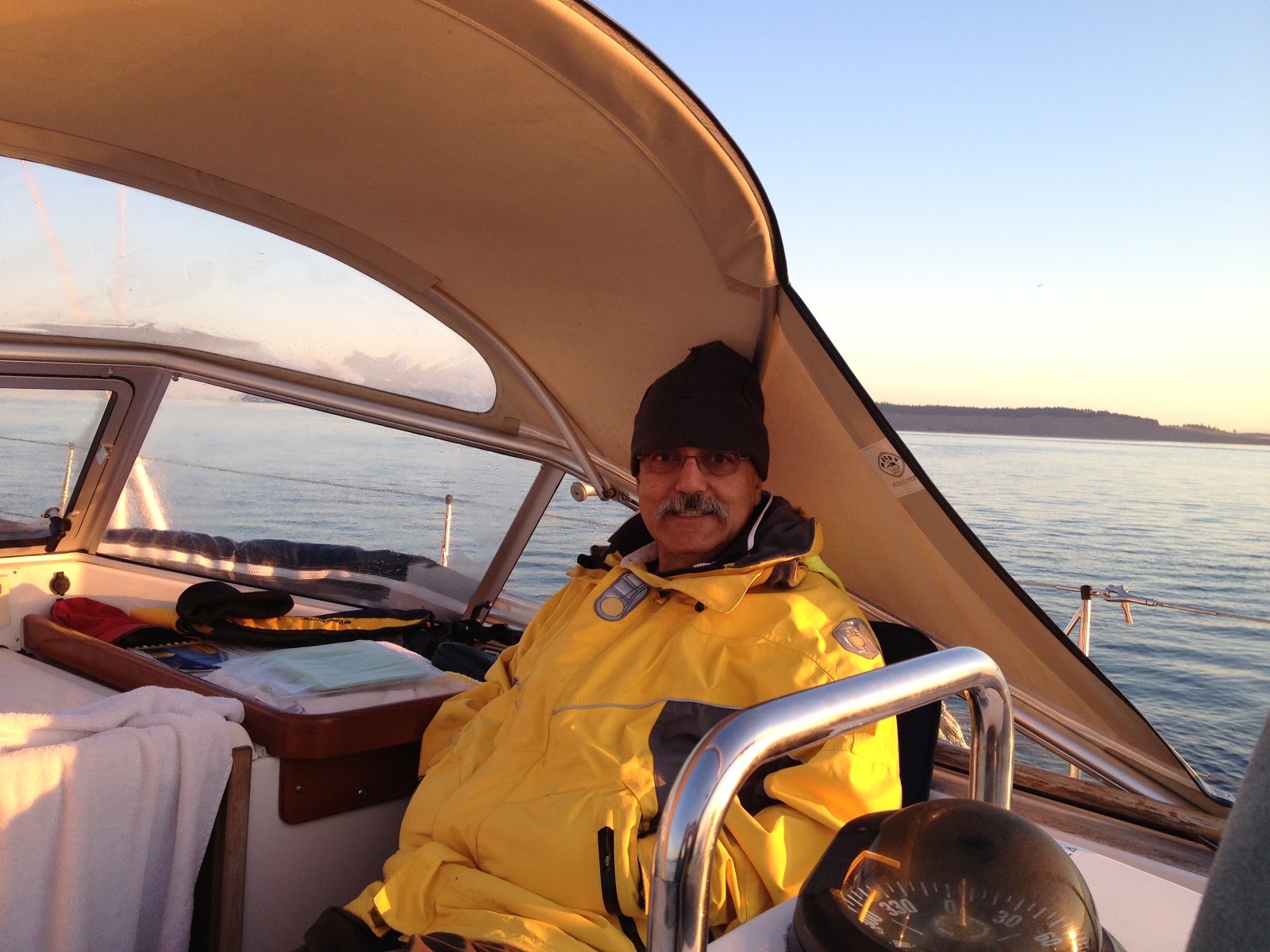 By mid-day we had wind!  Setting sails, we were making 9 knots at times heading out with the current. 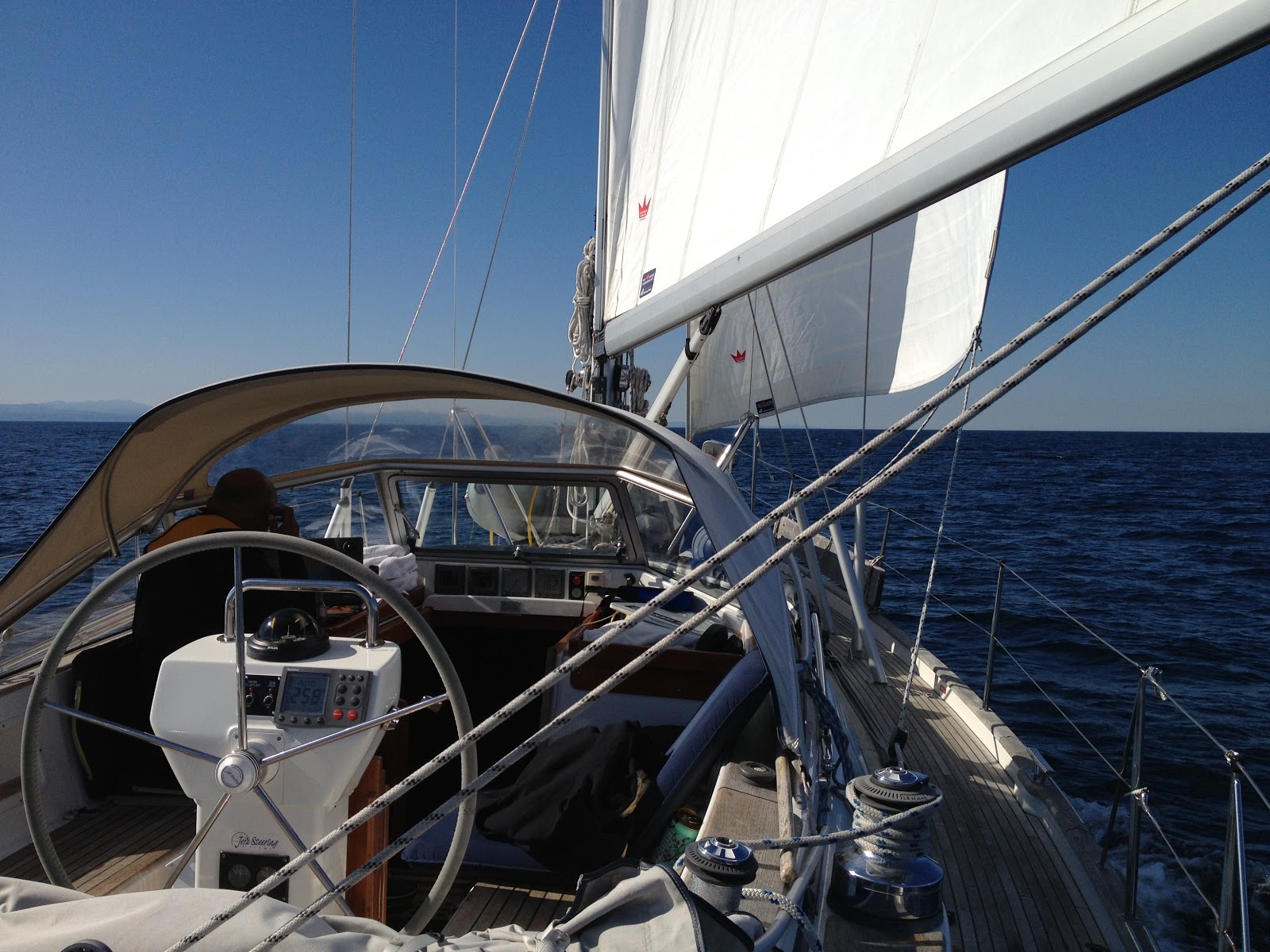 Jim and I spotted whales about 100 yard off the shore leading into Neah Bay.  It had been a while since I was there and although it seemed familiar after 10 years a lot had changed.  Neah Bay is on the Makah reservation, and is frequented by salmon fishermen, and yachtsman going out to sea.

As we pulled into the slip I notice the fish boat opposite us was listing to one side.  As I looked upward to the top of the outriggers it was appearent the reason for the boats positions was the weight of the bald eagle perched on one of the outriggers. 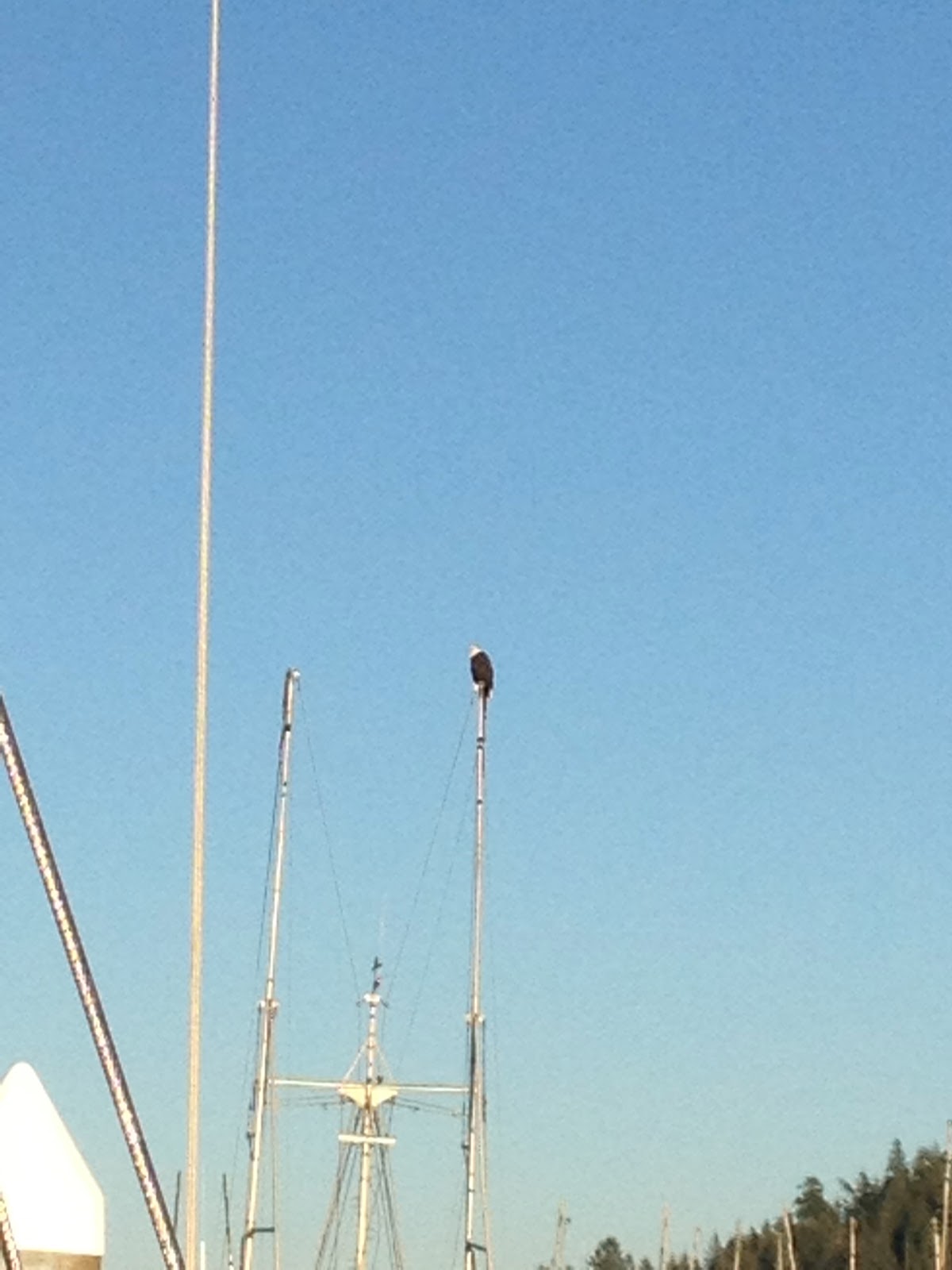 It is hard to appreciate the size of the bird in the photo, but he was at least 4 foot tall and had a striking pose, as he watched us pull in.

We found the reservation to not be all that welcoming, so we headed for the local market and picked up two steaks that Jim cooked on the boat.  Once again Jim's culinary arts were certainly appreciated; he made a very tasty meal.

We watch a sailing movie, "Captain Ron" for entertainment on the laptop and turned in early.

We motored out of Neah Bay at 6:30am and headed for Grays' Harbor.  Jim and I got up about 5:00am,  had breakfast and got the boat underway.  By 10am we were in blue water heading out to a 6 mile limit to parallel the Washington coast. 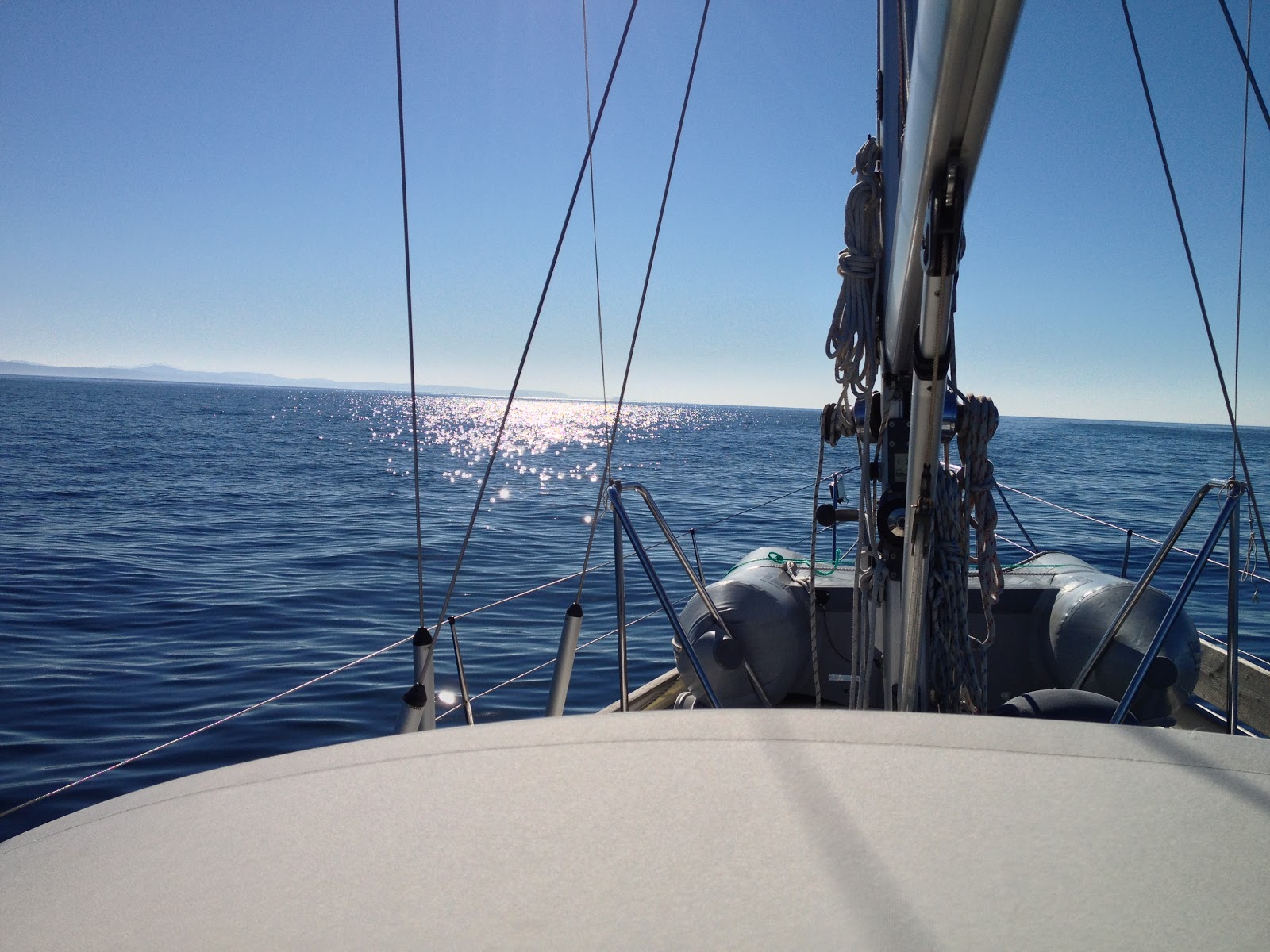 Flat seas and no wind meant we we moved only under power throughout the day.  By 7:30pm we approached the lights of the channel leading to Grays' Harbor.  In reading Charlie's Chart's, the author warns not to pull into Gray's Harbor unless you really need to or conditions are really good.  Having no wind, and flat seas, made the crossing of the bar easy, it was reading the lights that was hard.

A large seawall protects the marina in Gray's Harbor from the winter storms, but makes an erie approach at night.  The marina is mostly for commercial fishing, so it attracts aggressive harbor seals that could be hear barking from a mile away.  A light fog had come in that night, which diffused the industrial lights of the fishing boats behind the sea wall.  The combination of the barking seals, diffuse lights and moonless night, made the approach seem like a fitting scene for a horror movie.

We moored the boat and turned into bed at 10:30pm.


Once again we arouse at 5 and were out to see in an hour headed for Astoria.  The weather and the bar turned ugly as we made our way out of the harbor to open water.  A light rain and a 15knot wind made the 5 foot swells hard to fight through.  By early morning the swells and wind had driven wave height to be about 8-10feet right into our nose.  The boat motored up the swollen wave, leading to a 8 foot drop of the bow as she crashed through the waves.  We could only make about 4 knots while we moved toward blue water.  In my eagerness I tried to push her a little more, but the resulting bouncing caused the bow anchor to come off and we began to drag it.  jim ran up to the bow and tied her off while I held the boat steady.  No real damage was done, so we motored on.  Oddly I was relaxed in mix of wet weather and bouncing sea and took  a nap on the deck in the late morning run.

By 4:00pm we were close enough to Oregon to find the #1 buoy and made the turn around her. 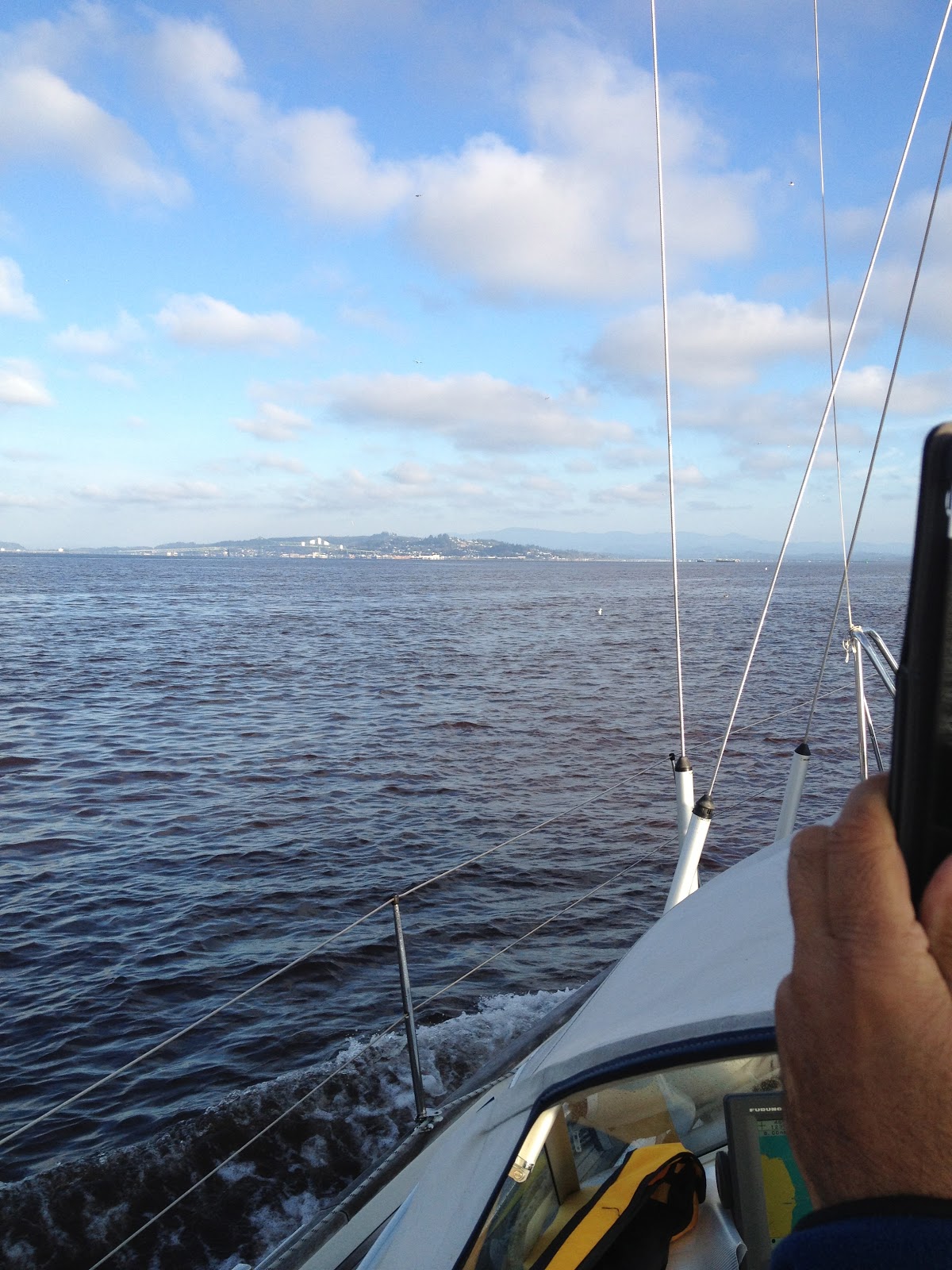 The long entrance to the Columbia Bar is often short circuited by pleasure boat placing their boat at risk for roll over in the powerful waves on either side of the channel.  We ended up crossing the bar at 5:30 and on the Columbia River by 6. 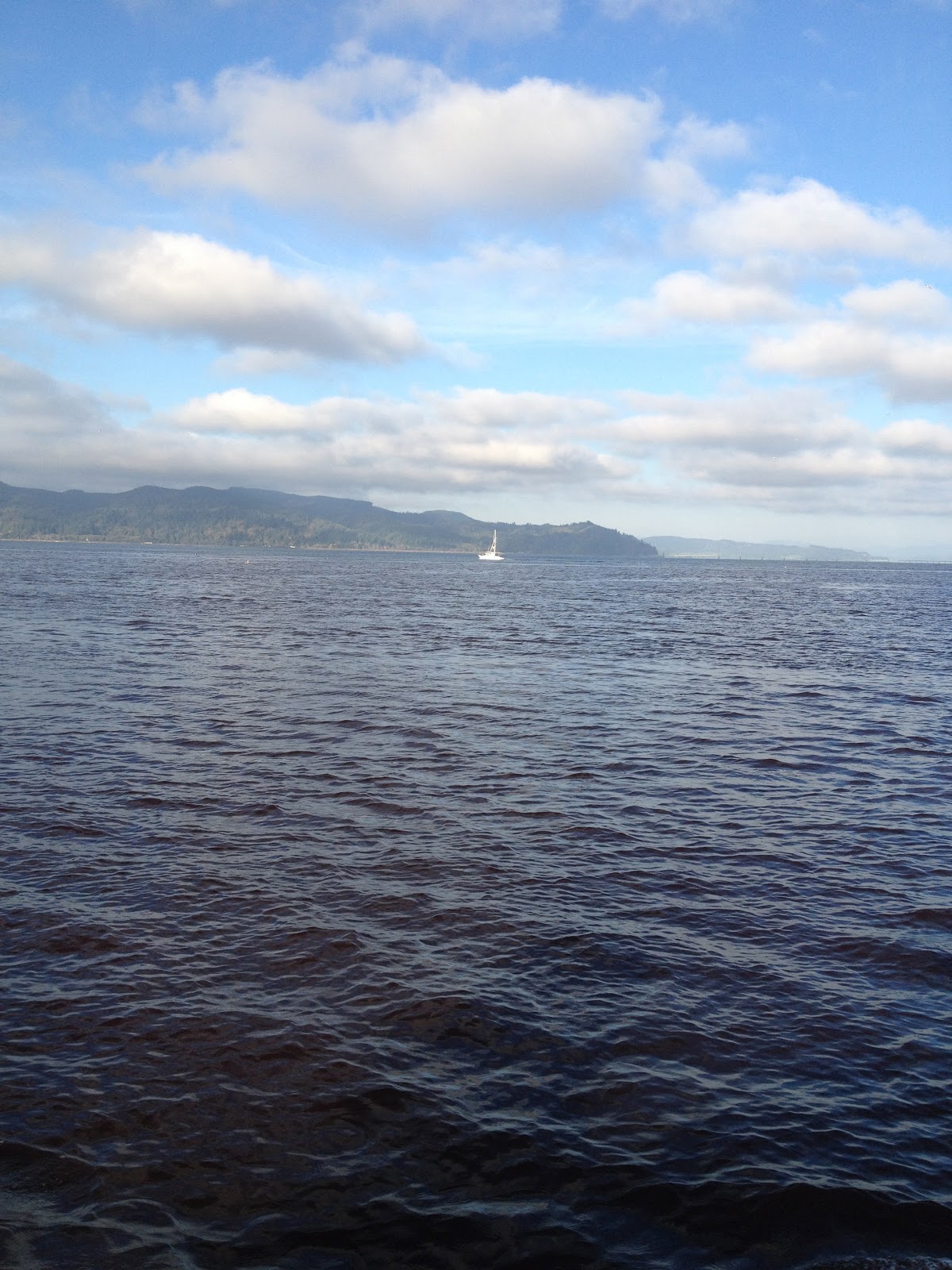 Ranidan pulled into the marina in Astoria and soon I was packed, off the boat and back to work.  My wife brought Jim's son down to the marina from Portland.  Jim bought us dinner at a place in Astoria.

It was a great trip!  thanks Jim, Charing and Ranidan for the wonderful memories.
Posted by S/V CarolMarie at 12:33 PM No comments:

Weekend Selling and Another Weekend Buying....

Last weekend we went over to Schooner Creek Boatworks for their swap sale, and opened a booth of our own.  After going through the Catalina 30 - NiSe and the CarolMarie, we had so many left overs it wasn't funny.  With more than two sets of spare every things, we decided to sell off any surplus at the swap sale.  In the end we made over a hundred bucks, selling out way before closing. 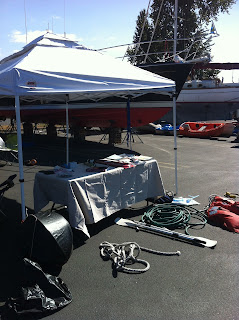 After letting it all go, this weekend both boats closed.  The NiSe closed and so I paid off the CarolMarie - now she's mine.
Posted by S/V CarolMarie at 3:07 PM No comments: