With all that is going on at home our plans to follow the SIYC up to the Seattle Boat Show next week were squashed.    I did get a chance to go up for the day with Jim from SV Ranidan, so we set out last Saturday on the road trip from Portland to Seattle.

Jim and I left Portland at about 6:30 am on Saturday morning.  By the time we reached Kalama, Washington, hunger overcame the desire to beat the crowd to the show.  Carrigg's Columbia Inn Restaurant offered just what we needed in terms of a nice hot breakfast and coffee to make the rest of the trip comfortable.  The Columbia Inn touts being visited by Jack Benny and Elvis, so it must be good. 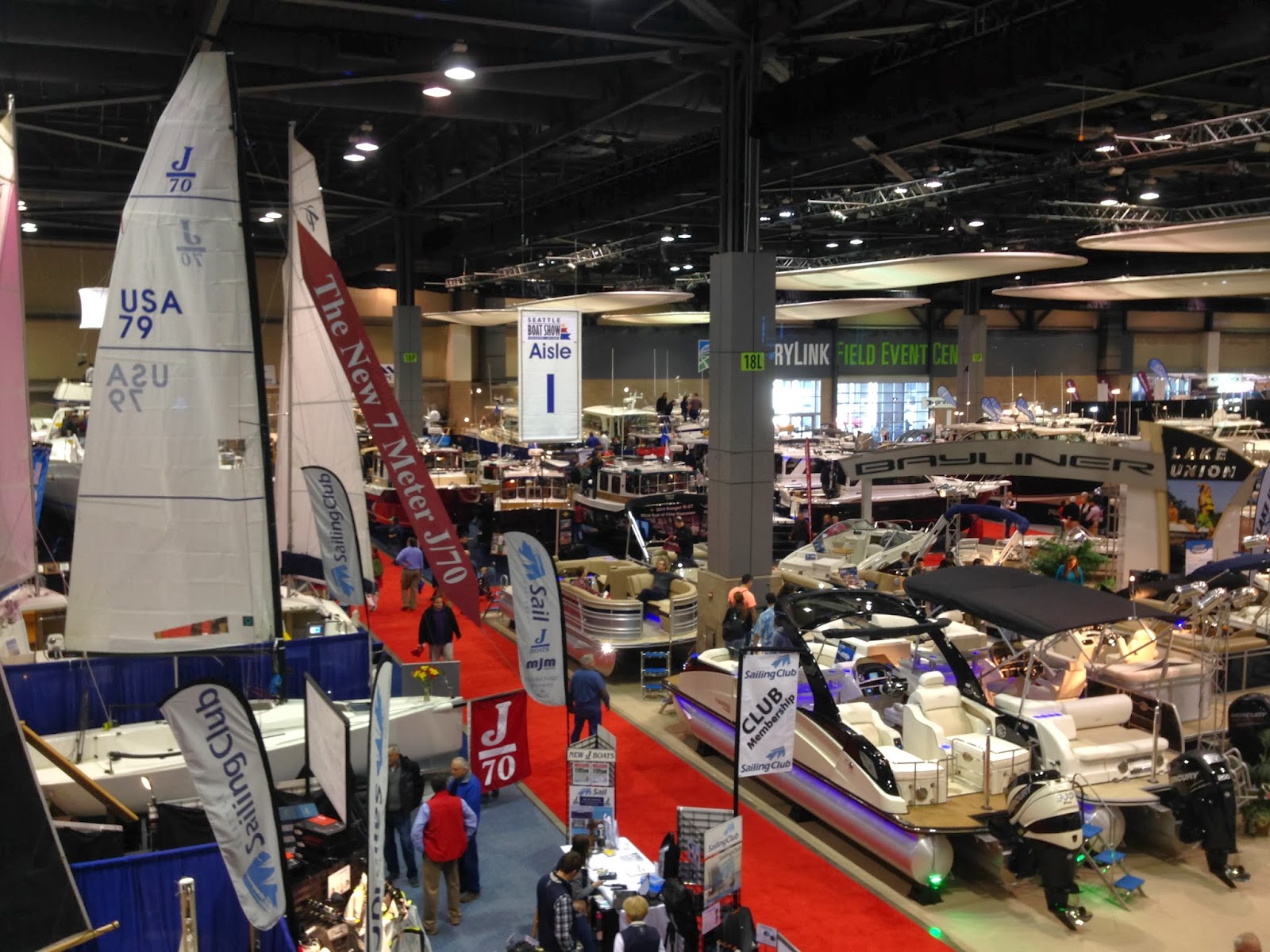 We arrived at the Century Link Field about 10:30, and went through the upper decks of the Concourse A looking at exhibitors.   Our first stop was at Aquamarine Inc.  Aquamarine makes generators coupled with about any type of accessory you'd like; AC, refrigerators, alternators, compressors, etc.  Their small compact units will fit on about any boat and supply power for just about any needs you might have.  Aquamarine acts an integrator of various pieces of kit to fit on their small diesel engines.  Their integration includes custom mounts and pulleys as needed. 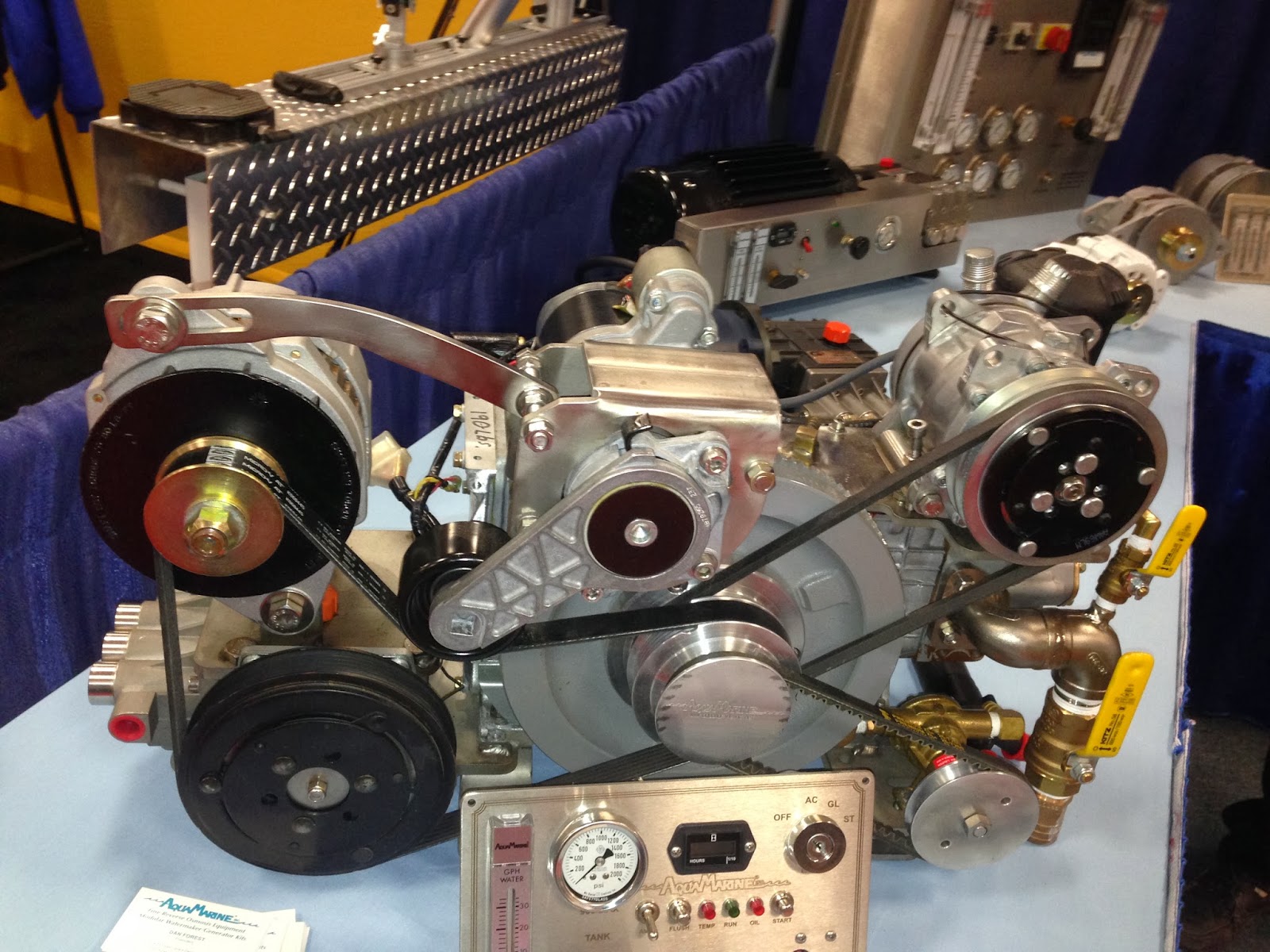 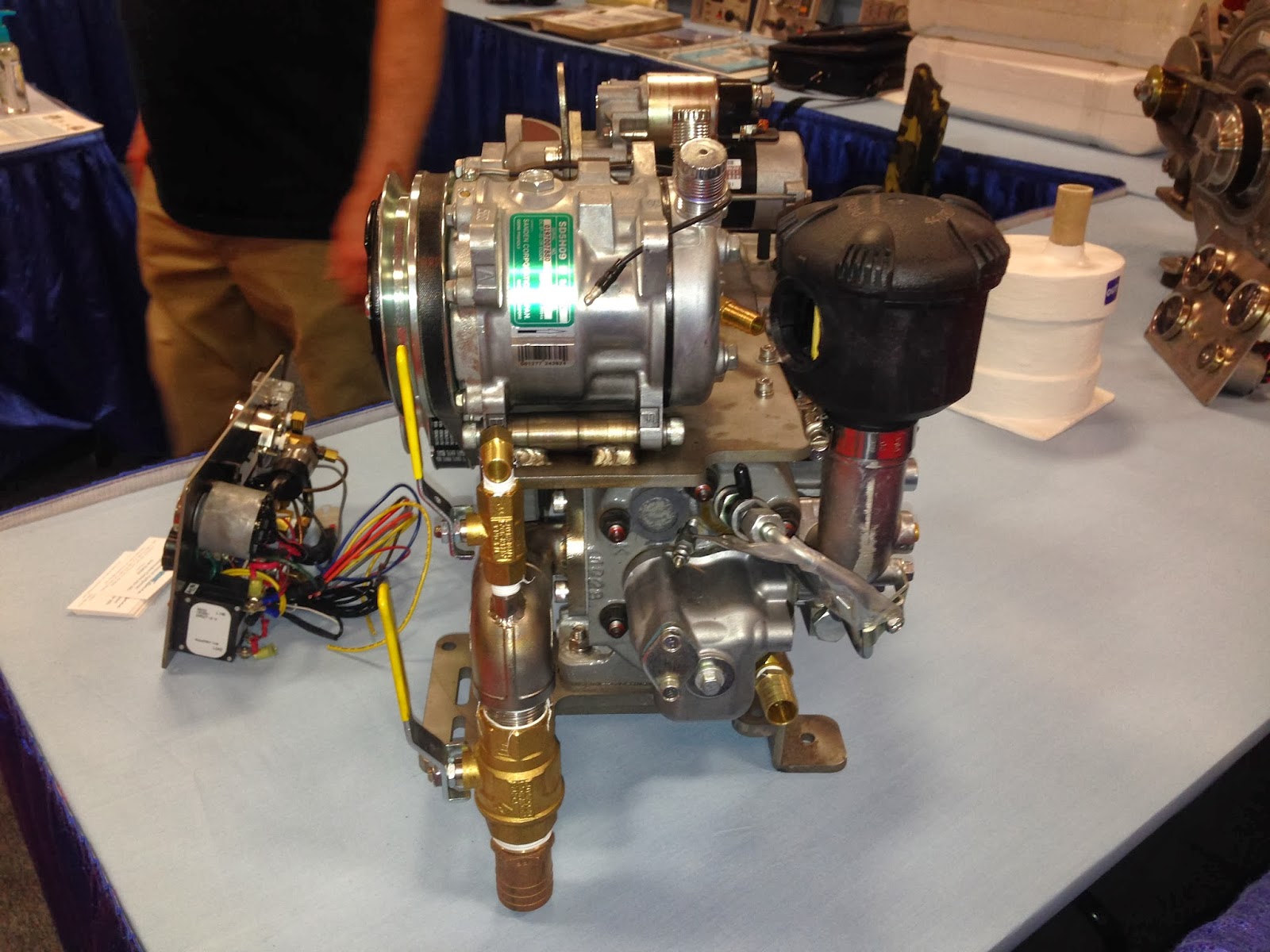 Next we visited with the folks at Fiorentino Para-Achnors.  These guys had a nice offering of heavy duty compact drogues and para-achnors for heavy weather tactics.  Their drogues fold up into a nice compact shape as seen on the top of the tree on the picture below. 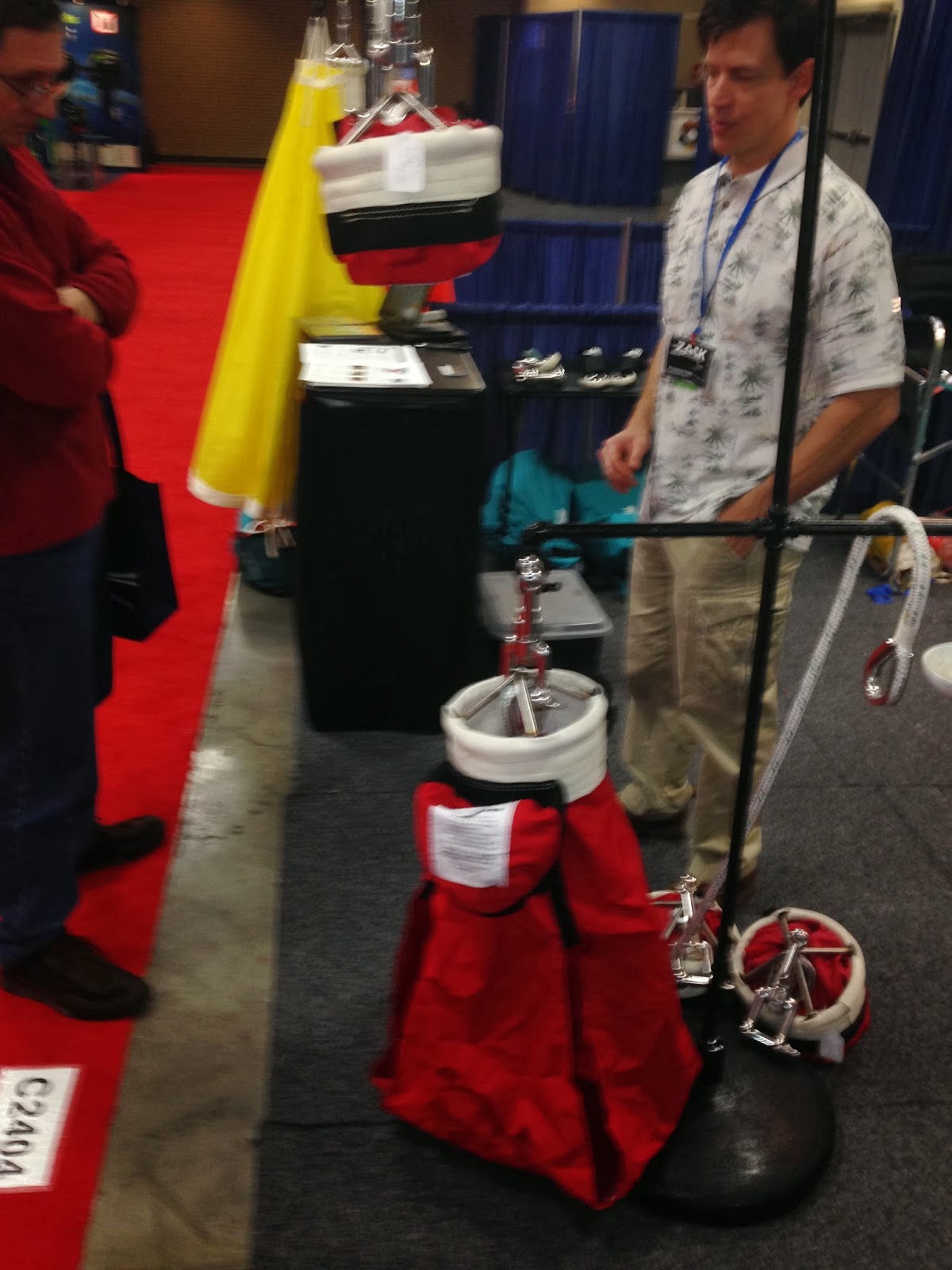 While their chutes fit nicely into a bag smaller then most crews sea bags. 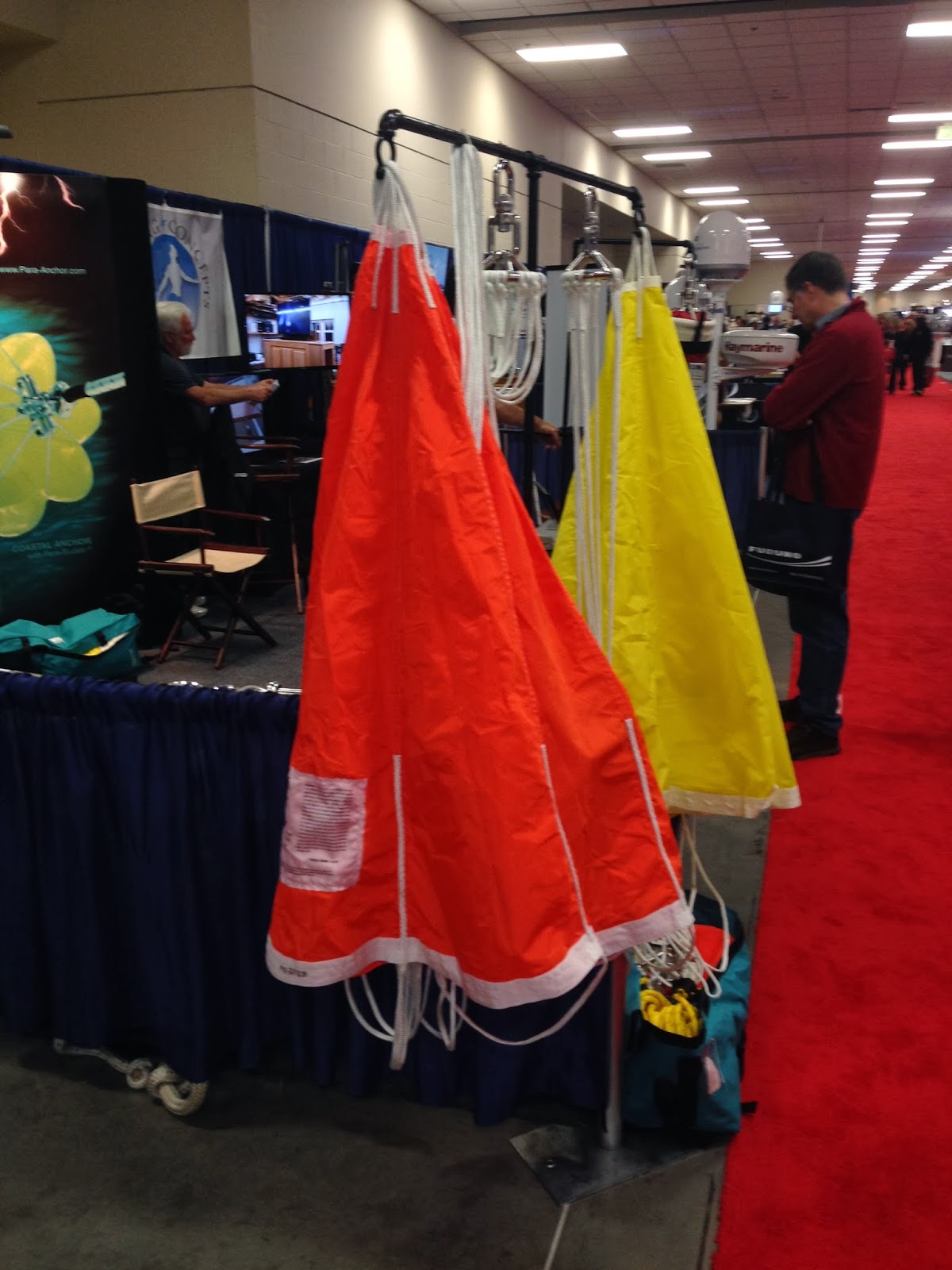 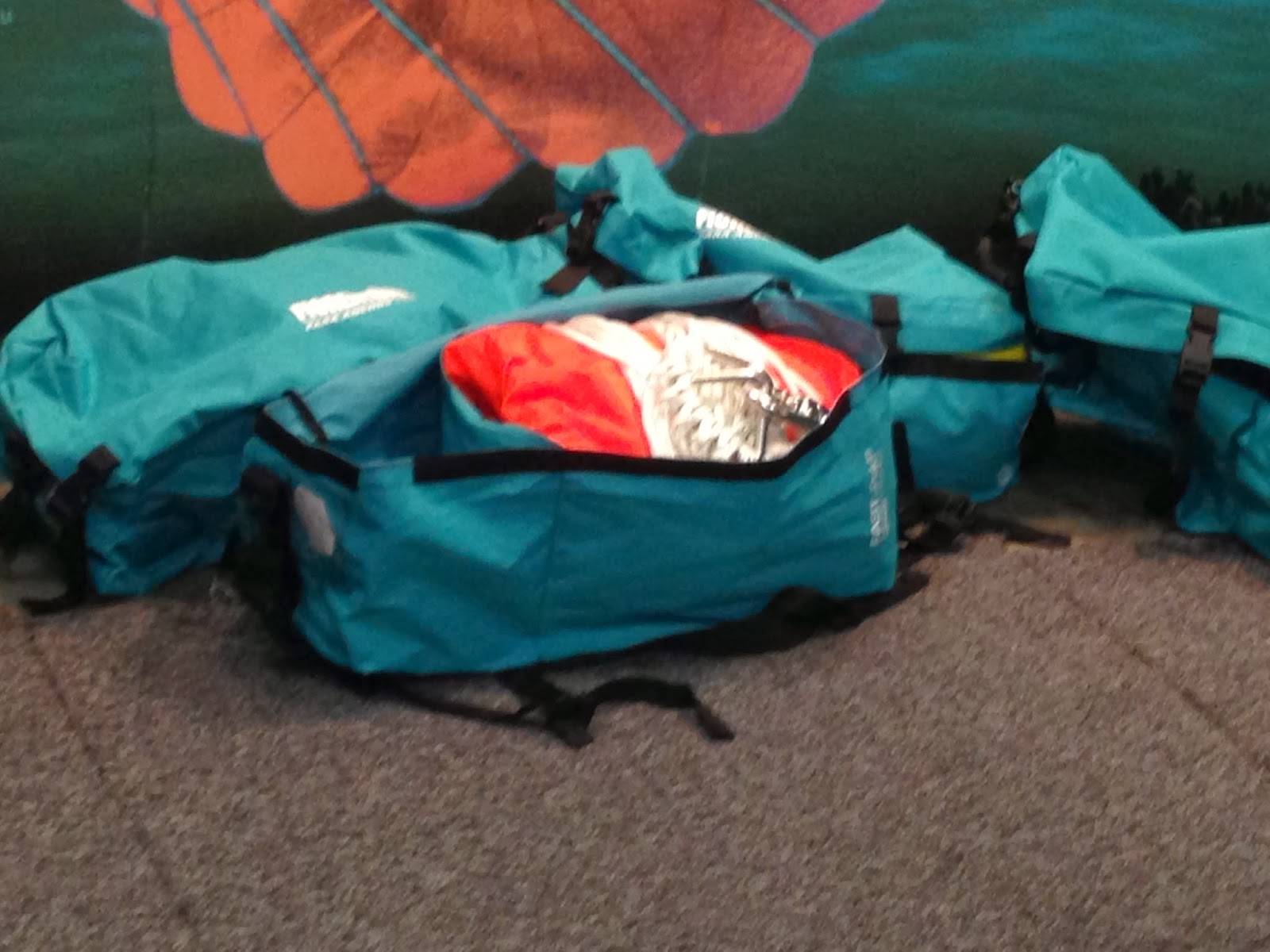 There was enough room and a separation panel in the bag to place the drogue as well.

Within the show I found several nice products that I had seen before.  Two of which were at Fisherman's Marine and Supply.  The first was a chair, that folded flat but had locking arms.  The nice feature of the chairs was it's ability to fold flat for storage, while providing a comfortable arm support.  I wasn't too crazy about there color offerings, so I passed on the purchase. 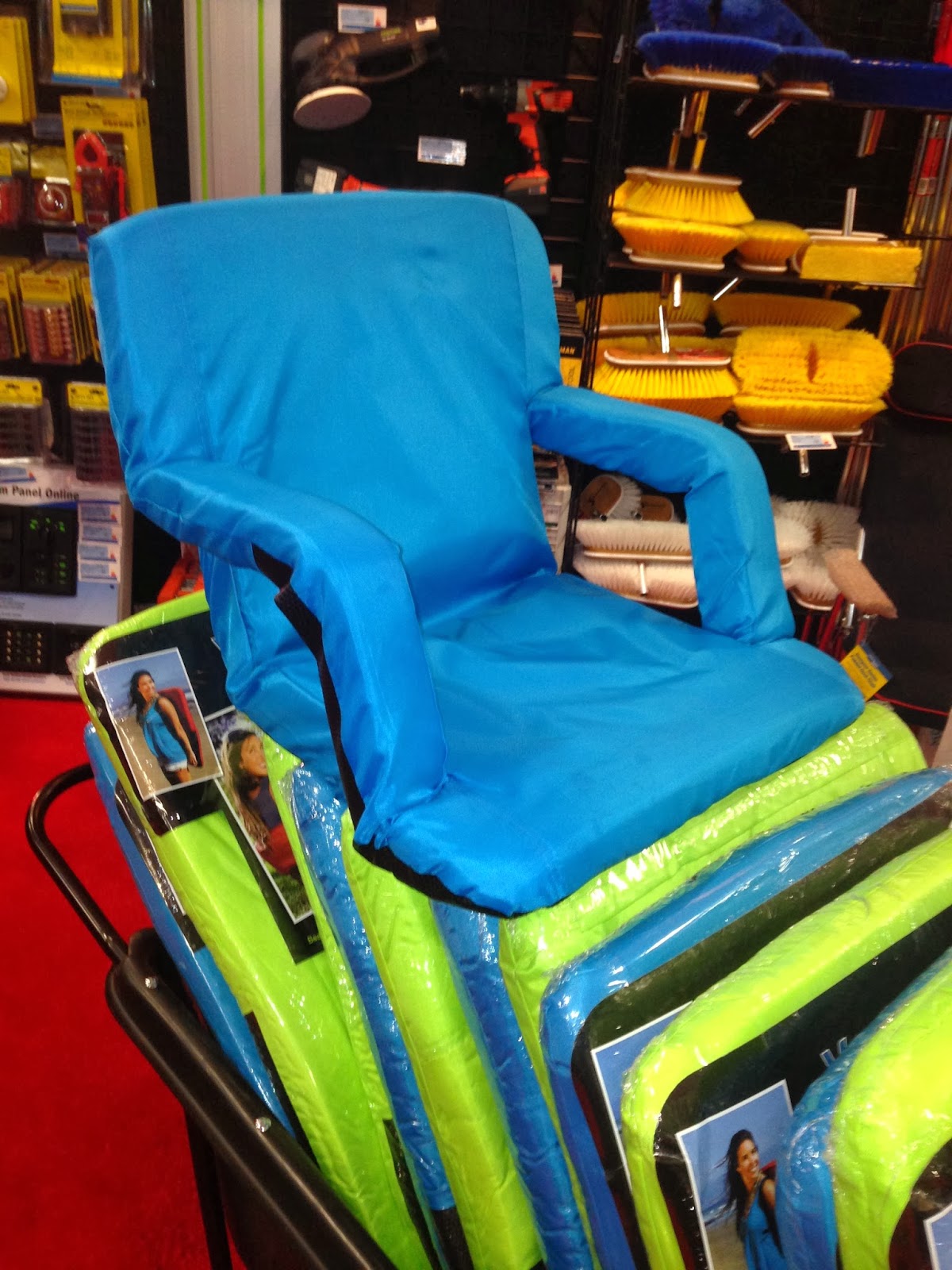 The next interesting product was offered by several companies I would find out later, but Fisherman's had the first one I saw.  The device was a heat power LED table lamp. The light consists of eight bright LED lights that are powered by a single tea light candle. The candle is completely enclosed in the base of the JOI light to reduce the chance of accidents. What makes the JOI so amazing is that the candle does all the work. It doesn't use batteries, solar or wall power to create the light. JOI uses the same thermoelectric technology to transform the energy of a single tea light candle into enough light to illuminate the cockpit or salon of most cruisers. The eight LED lights are on two telescopic arms that enable the lights to be pointed in any direction. 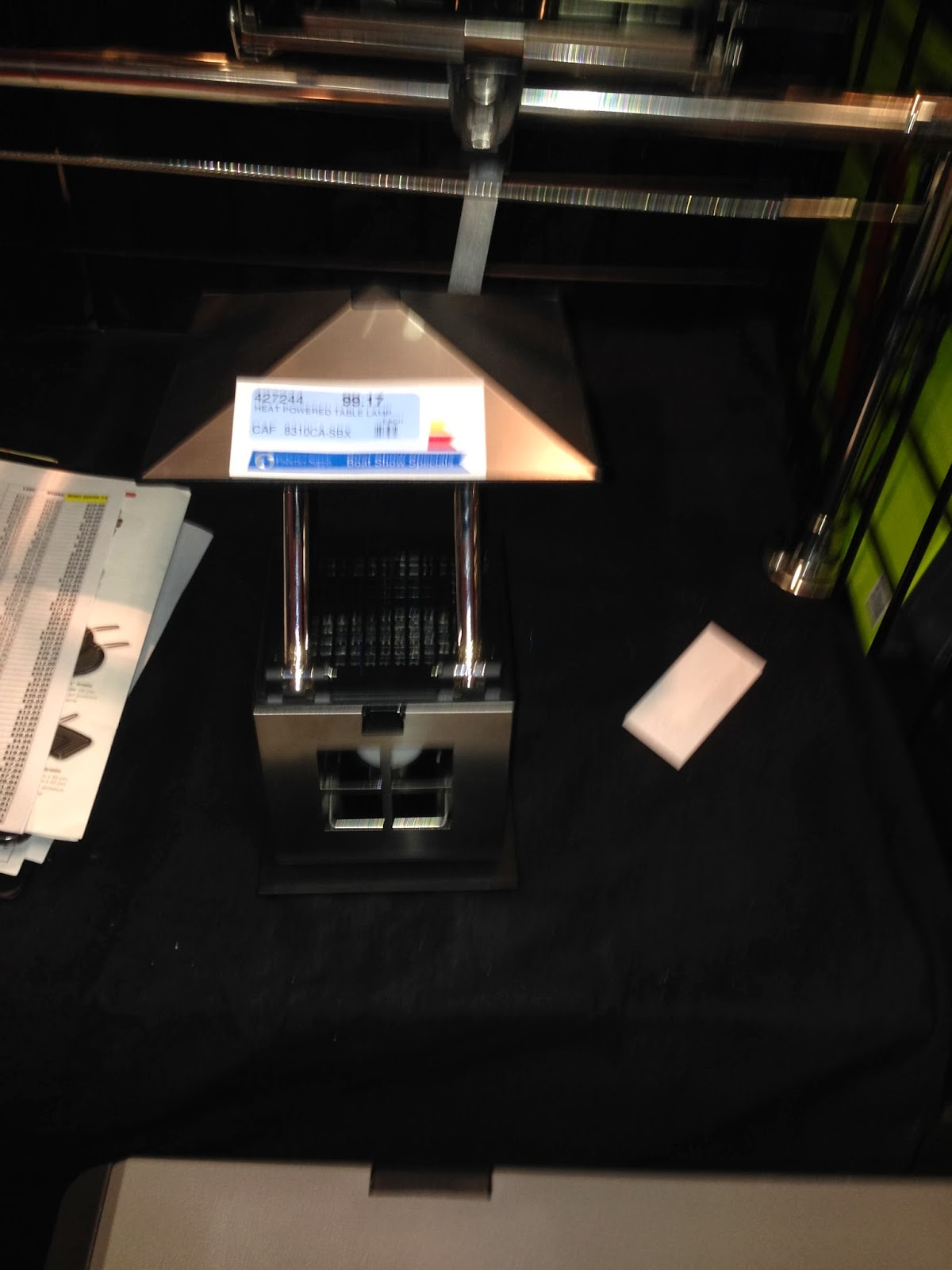 The best solution to come along in years was the "Automated AnchorBuoy "(http://theanchorbuoy.com).  The Anchorbuoy attaches to an anchor as shown from their website to your anchor. 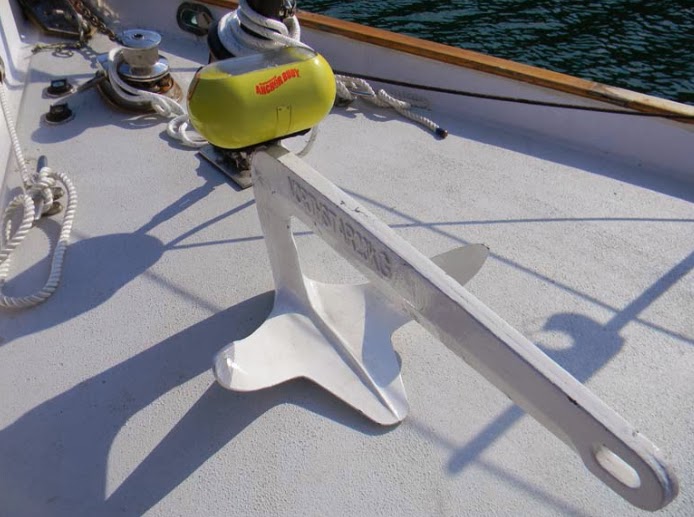 Once your anchor is deployed the buoy floats free, but has a taunt line attached to your anchor.  That line is a 70lb test, on a spring loaded reel, keeping the float right above your anchor.  What's also nice is the device uses solar power to charge it's batteries which are activated automatically when deployed.  That means no batteries to change and everyone's sees your anchor at night.  The couple who invented the product were the ones at the show selling it.  They said it was their first show.

I spoke with Karen next at the Viking Liferaft Company.  She explained their rep's in Seattle would be able to re-certify the raft on the CarolMarie, so no need for a new one.  Thanks Karen!! 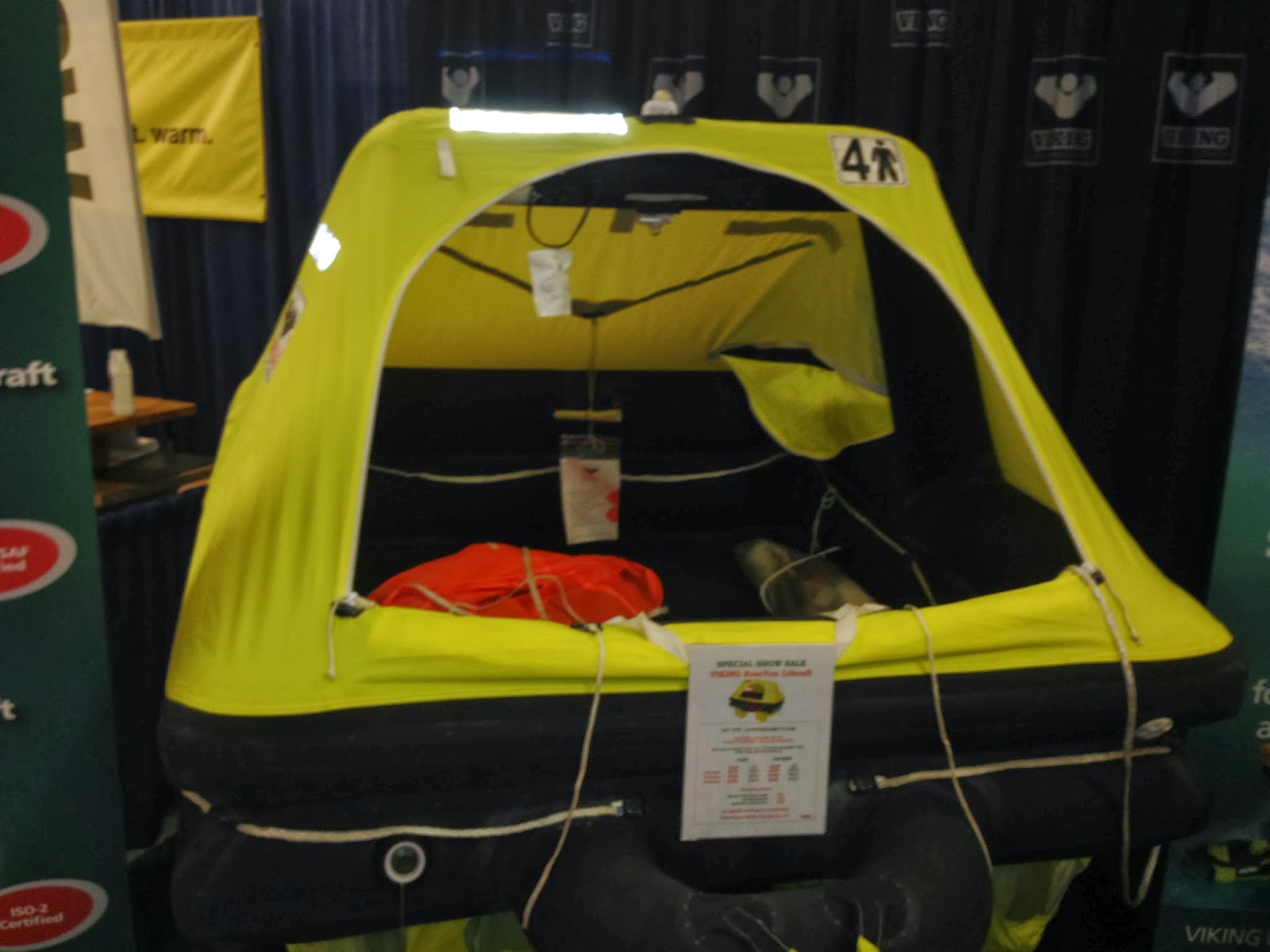 To me the most interesting boat at the show was this Scamp cat boat created by GigHarbor Boatworks.  The cat boat was gaff rigged, and had an offset centerboard that folded up into the lazarette, making a large cockpit for the little boat. 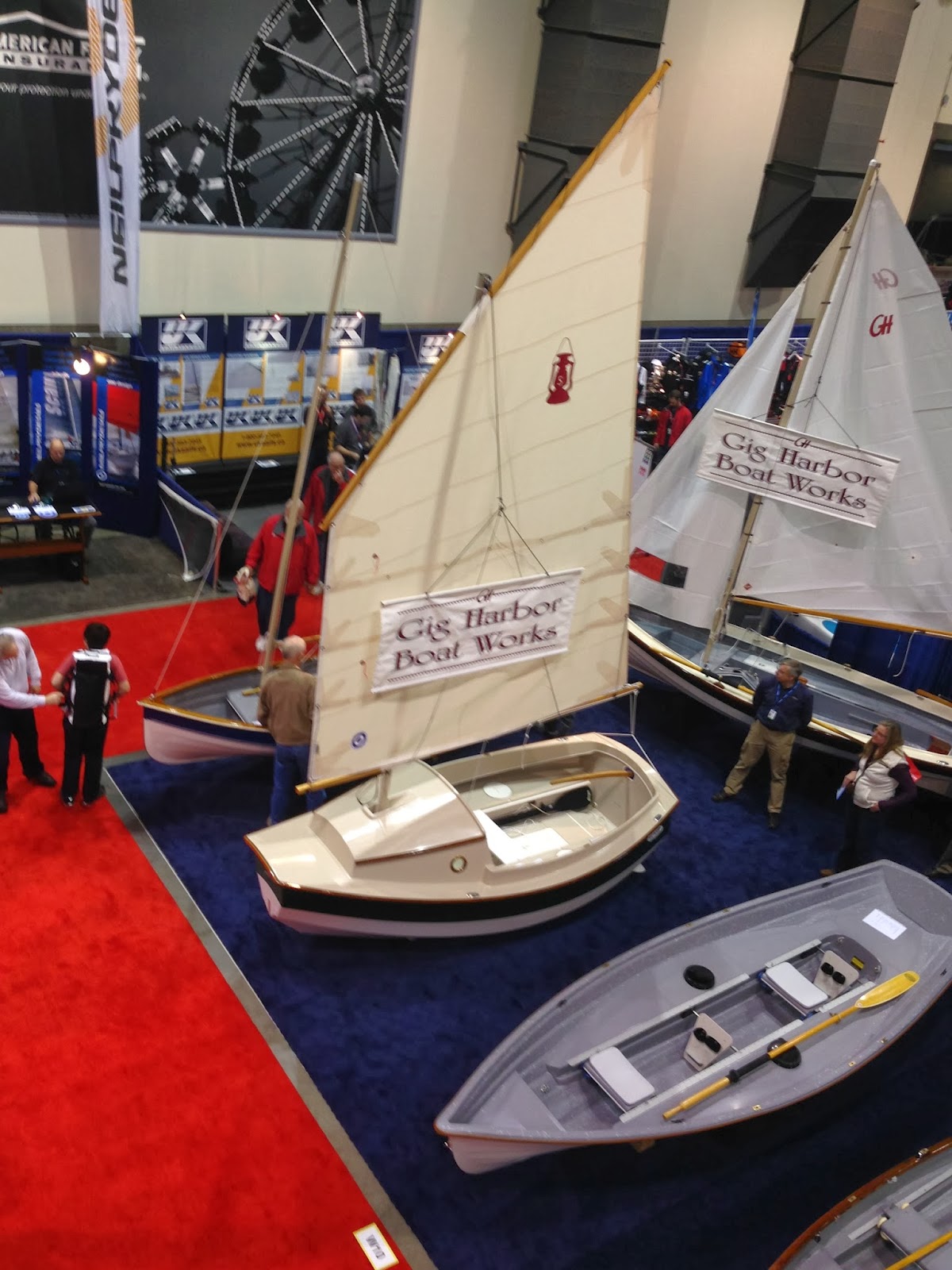 One of the attractions not boat related was the large skyline of Seattle being created in sand.   The details were still being made as we came through, but the attraction was drawing attention from the crowd. 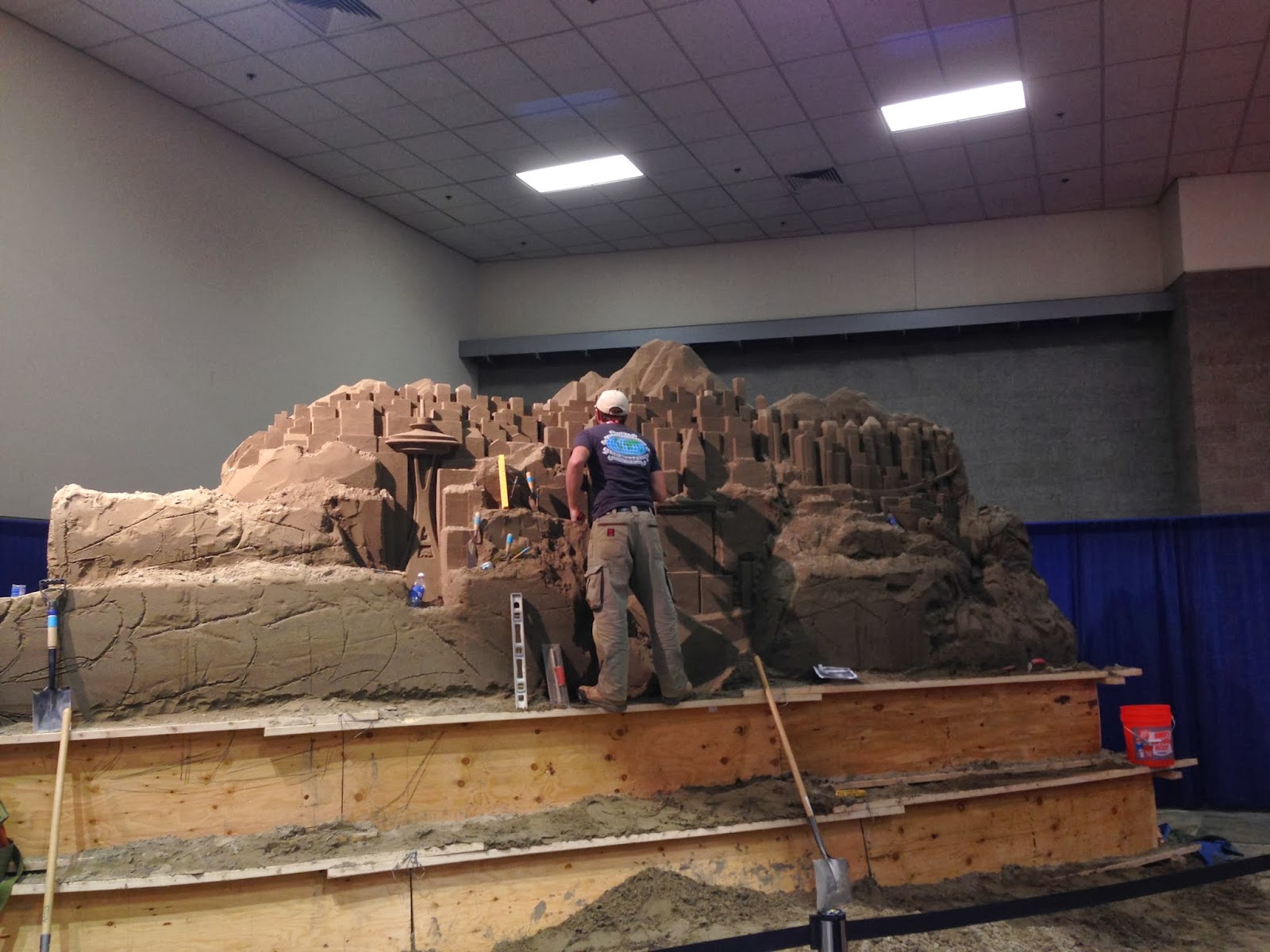 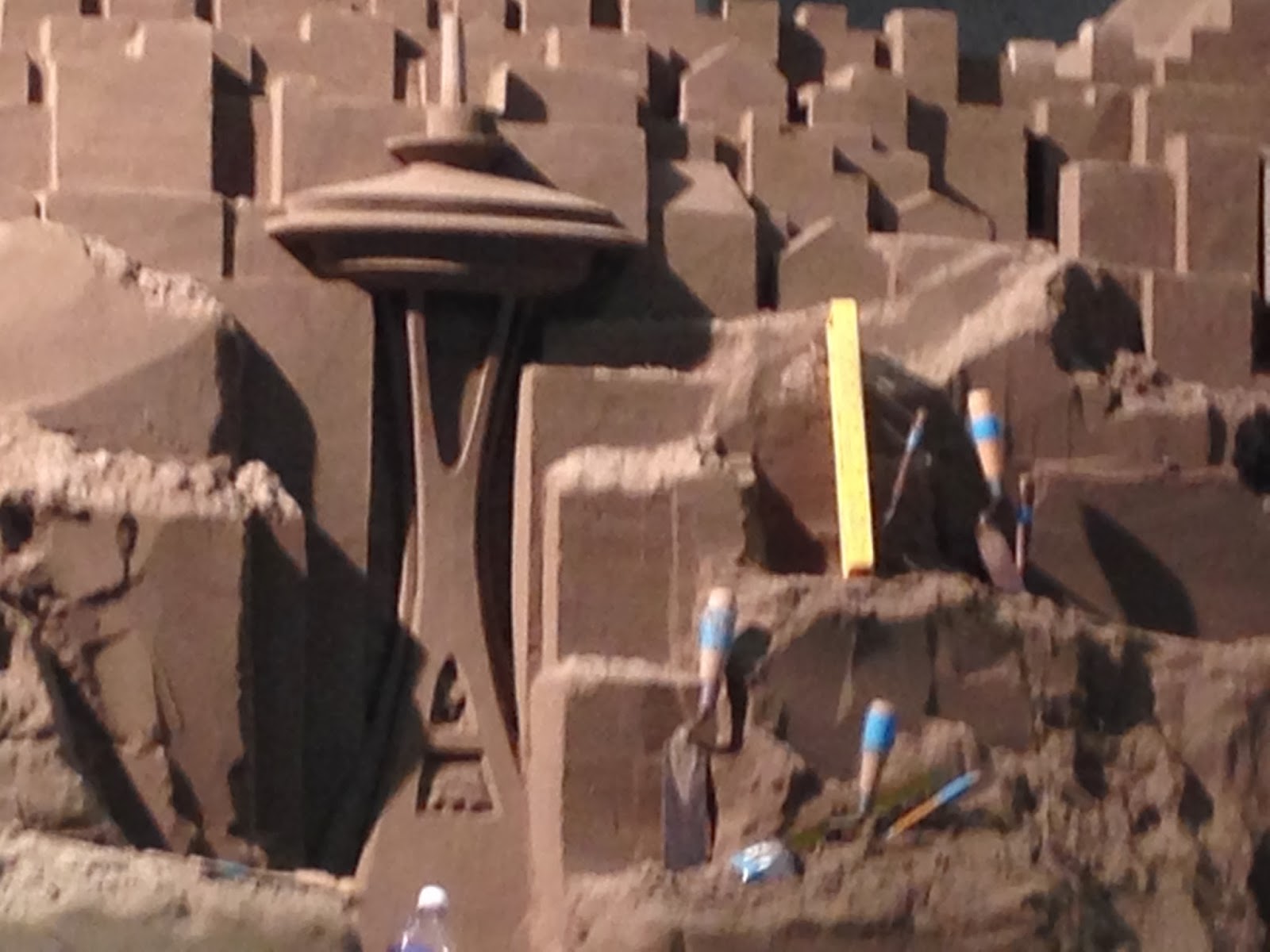 Our good friend and sail maker Cliff was there too.  This year at the Portland boat show Cliff wrote up a quote for us for a new spinnaker and staysail.  We are just trying to pull together the pennies to see if we can afford the replacement this year or will it be next. 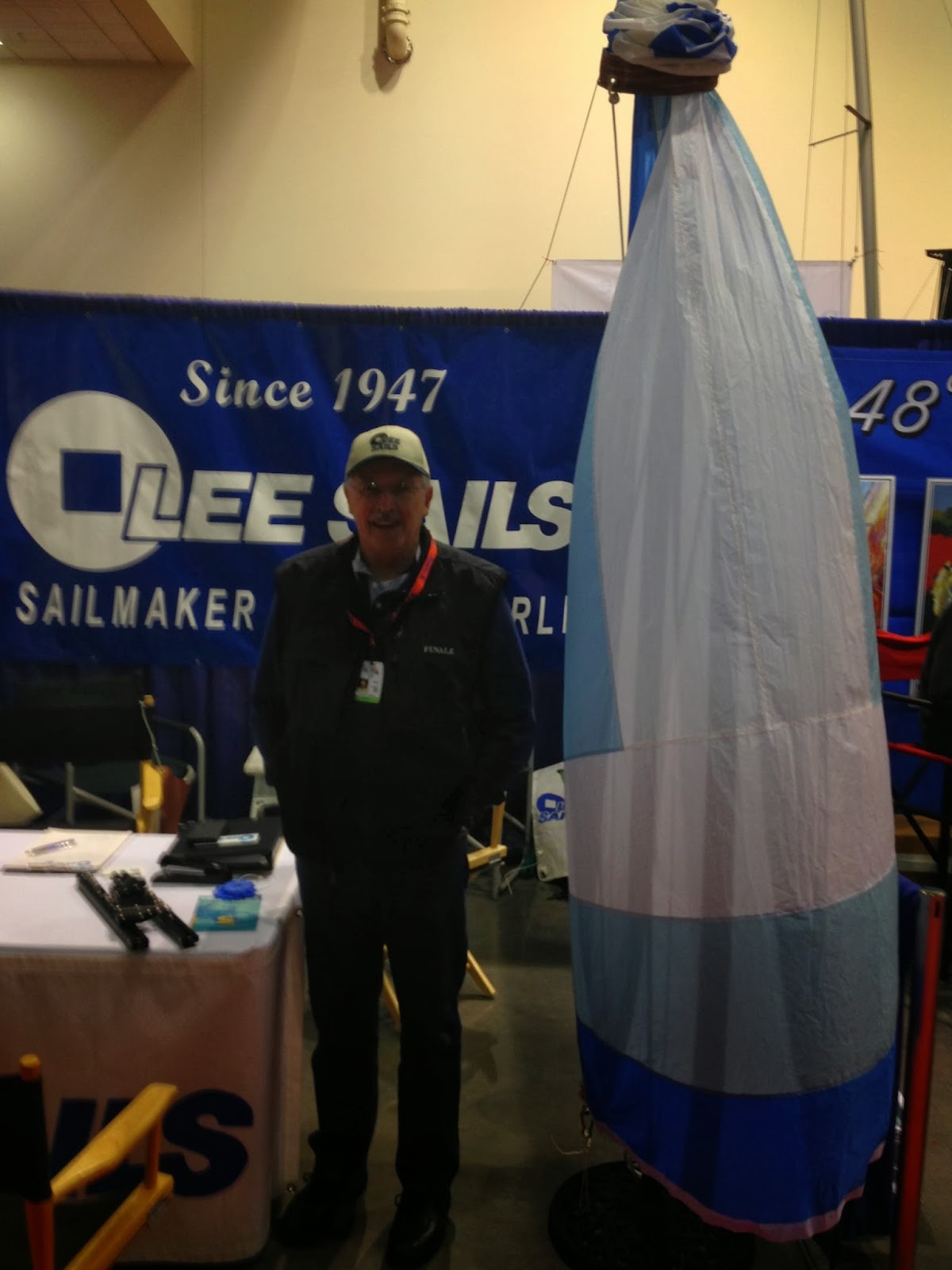 One boat that got a good deal of attention was this Nordic trawler.  The price tag above stated Pride of Ownership for $78,500.  What the sign didn't say was that was for a 1/8 share of the boat and a signing of 1,100 year maintenance fee.  Dock fees were not included or fuel.... 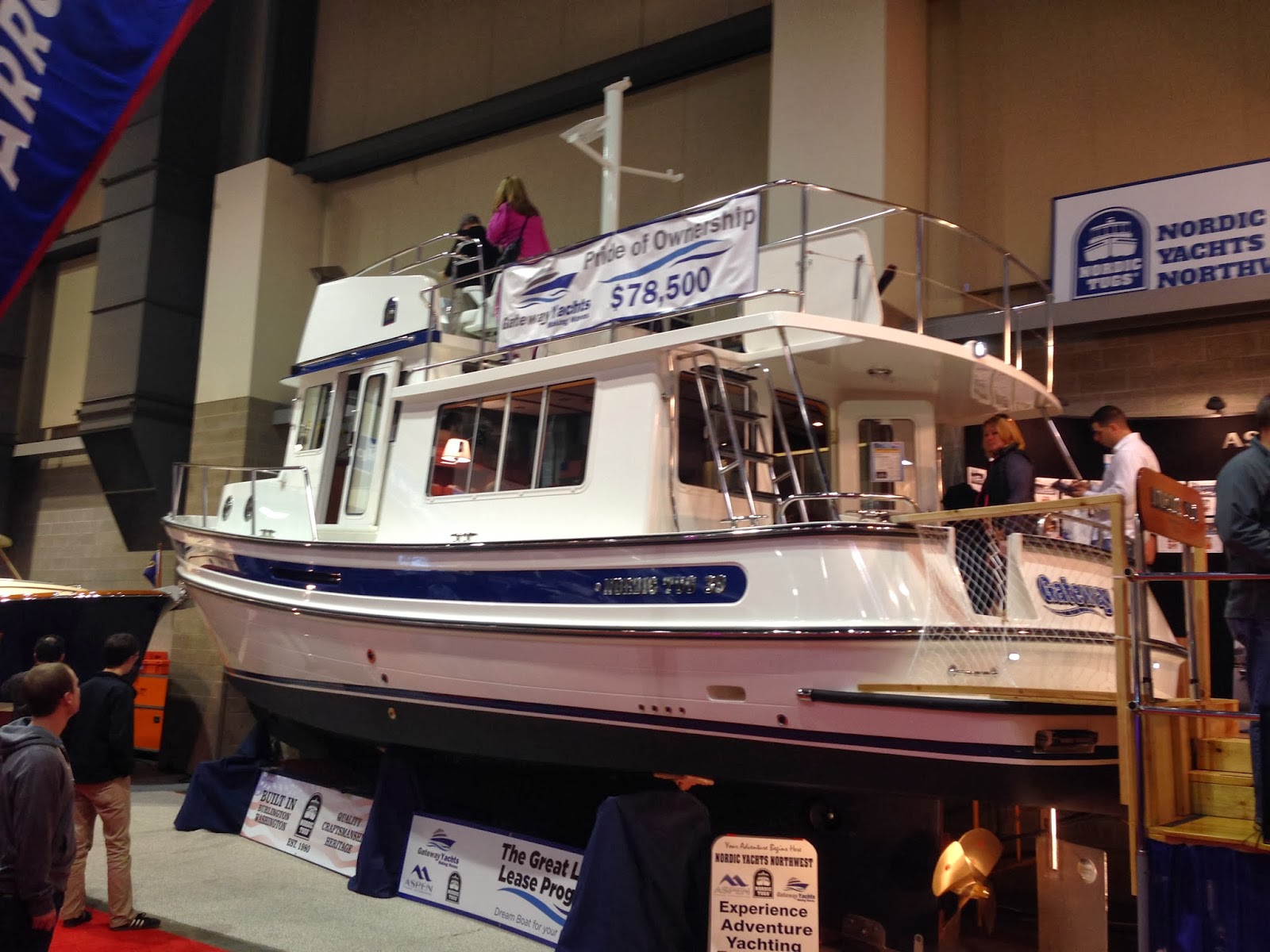 Last year one of my highlights was the Helly Hansen Booth.  I bought a really nice racing bag from them, which didn't stay in my possession long, as Charing took charge of it.  So I was glad to find they had one left when I got there and didn't charge me sales tax, (Oregon Residency paid off). 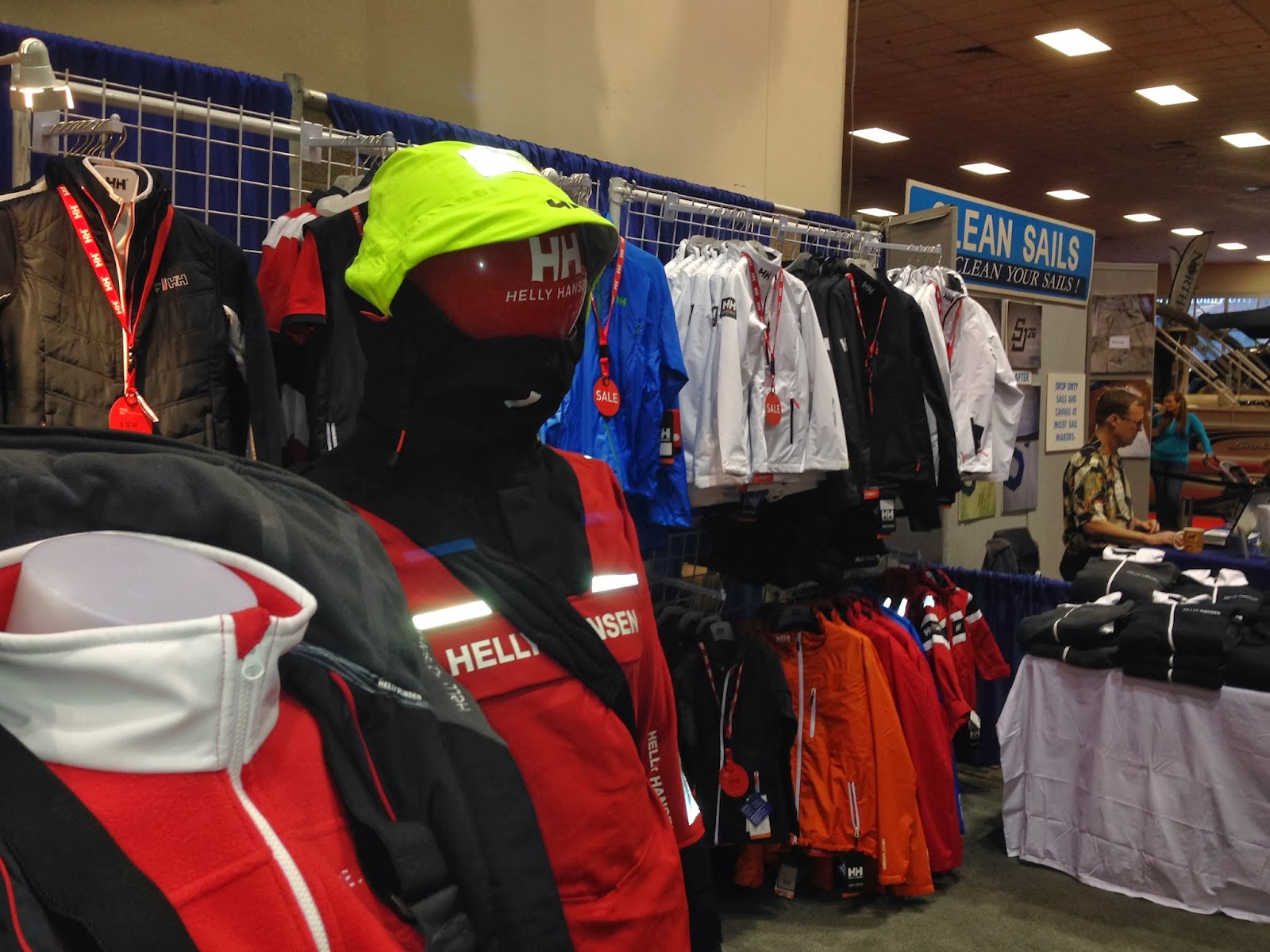 On the CarolMarie, we go through boat poles.  We lost two of them our first year, so it's hard to keep a favorite on board.  I was delighted to see on supplier at the show had them on sale for $20 a piece sales tax included.  Unfortunately, this time I had to pay Washington sales tax, but picked up two fairly cheap. 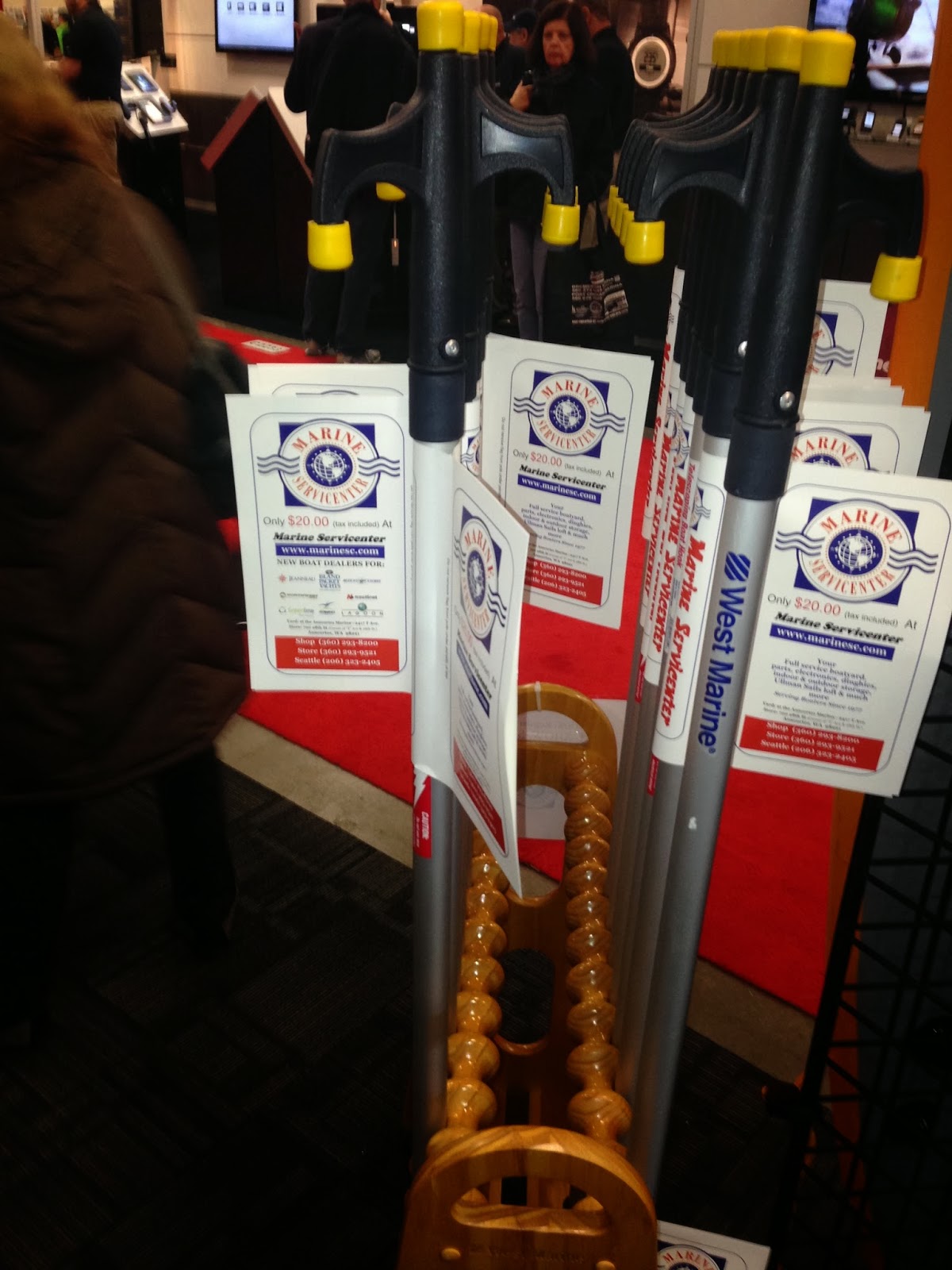 We left the boat show at about 4, and stopped at Cabela's in Lacey, Washington on the way home.
I can honestly say I haven't seen that much camouflage since I left the trailer park.  I had never been in a Cabela's so it was nice point of interest. 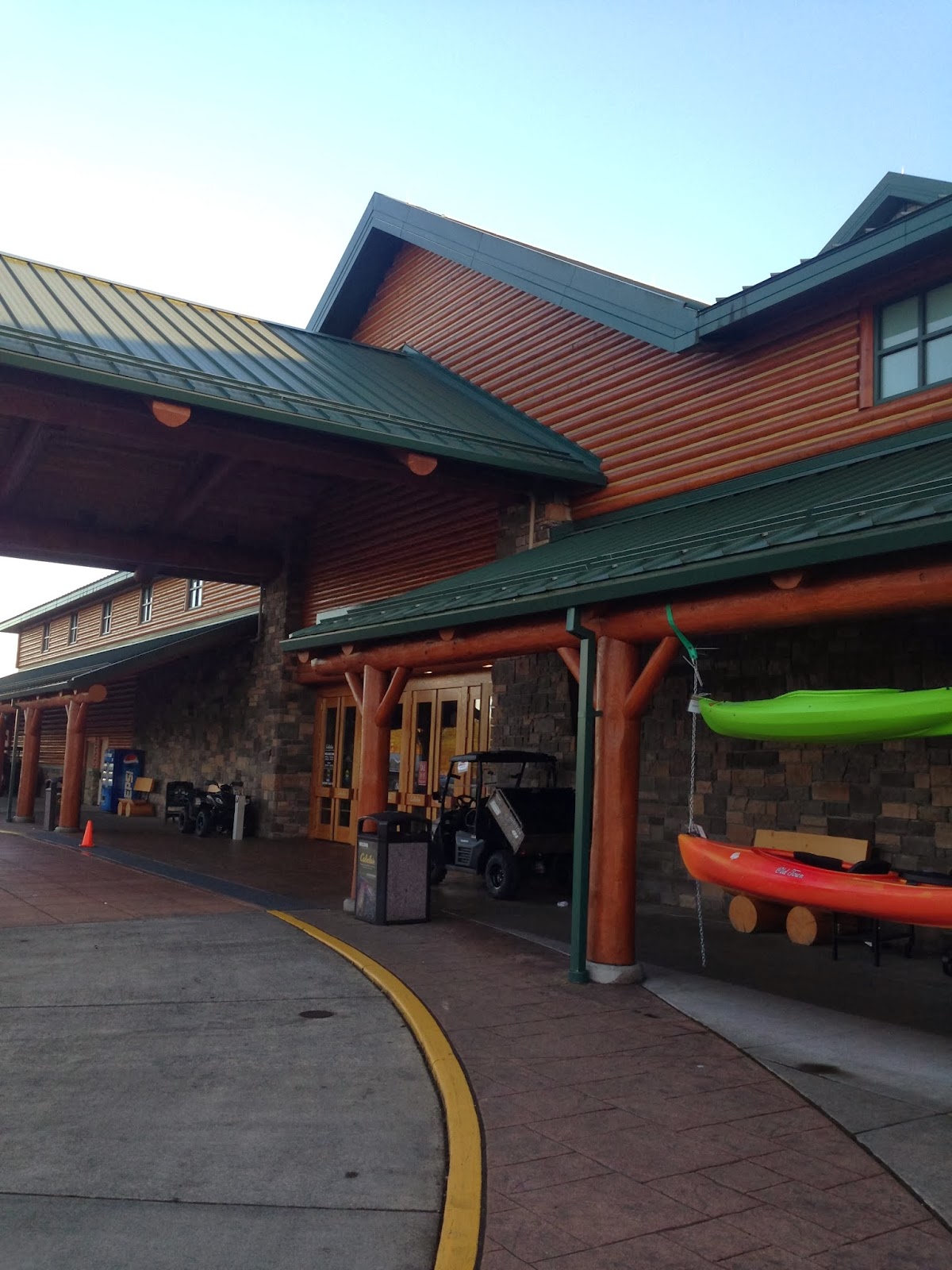 Every year about this time, when you think the cabin fever is at it's highest comes.... Boat Show Season.   Yes, Boat Show Season, that short four week period after New Years Day but before February's break in the weather.  Boat Show Season in the Pacific  Northwest is when the Portland Boat Show (appetizer) and the Seattle Boat Show (main course) happen within a week or two of each other.

Of course the captain and crew of the CarolMarie attended the Portland Boat Show.  The Portland Boat Show is like watching the same B-movie over and over again.  Each time you hopes it's going to get better, or perhaps the ending will change, but it never does.  Just like watching that B movie once more you see details you didn't see the last time, as well as familiar characters you see every time.  Mike from Passion Yachts showed off a new 2014 Oceanis 41.  The gray hull shined throughout hall B in the Expo center and Mike beamed at the line of people ready to see it.  But that was about all that was new.

Next weekend begins the Seattle Boat Show, and of course we already have tickets in hand for the event. Of course like every year there is some last minute decisions about which weekend to go.  The better classes always seem to be at the end of the show, whilst the best picken's for free stuff are always at the beginning of the show.

The CarolMarie is now flying the burgee of the Sauvie Island Yacht Club (www.siyc.com). In the January SIYC meeting we were finally invited in.  SIYC is mostly a cruising yacht club with many of her members having gone around the globe, or are in the mist of doing it now.   With their wealth of knowledge, it seemed appropriate to join and learn as much as possible from their experience.  We have been hanging out with them for the last 5 months, so I guess they figured they might as well let us in.  Also excluding the CarolMarie there are four other Hans Christian's in the club.  Three of those Hans are 38's.

There is always something to do on the boat.  The list of projects is longer than I have time to keep up with them.  Over the winter thus far, we've scrubbed the hull and decks clean twice in freezing weather.  Routed new lines, cleaned sails, cleaned sail covers and replace the dock lines.

The starter battery died too when the big freeze came a month ago.  Once more into the breach of pulling all the batteries out to replace one.  Now they are all new and under warranty; we should be good on power for a while.

Back in October we went to the Halloween Cruise with the  SIYC.  We met Ray and Alicia, fellow cruisers and recruits for the SIYC (http://www.sailblogs.com/member/rowena/?xjMsgID=292267)  I showed Ray our bulkhead mounted 12 TV, and spoke about the low cost of getting one from a local retailer that wasn't a costly marine grade.  Thinking it was a good idea, he did the same.  He went to the store and found a 12V TV with integrated DVD to install on his 41' Formosa Yankee Clipper.  At the next SIYC after he installed he thanked me for the advice and told me about it.  As a technologist I couldn't be outdone, so I have been waiting for the post Christmas sales to update ours with an integrated DVD player as well.  Yesterday I finally got it installed, and she came out nicely.
The real trick in the installation was getting the placement right to make it level and looked centered, at the same time having enough room for the DVD to go into the backside without running into the wall.  We finally got it right though after lots of measuring and testing. 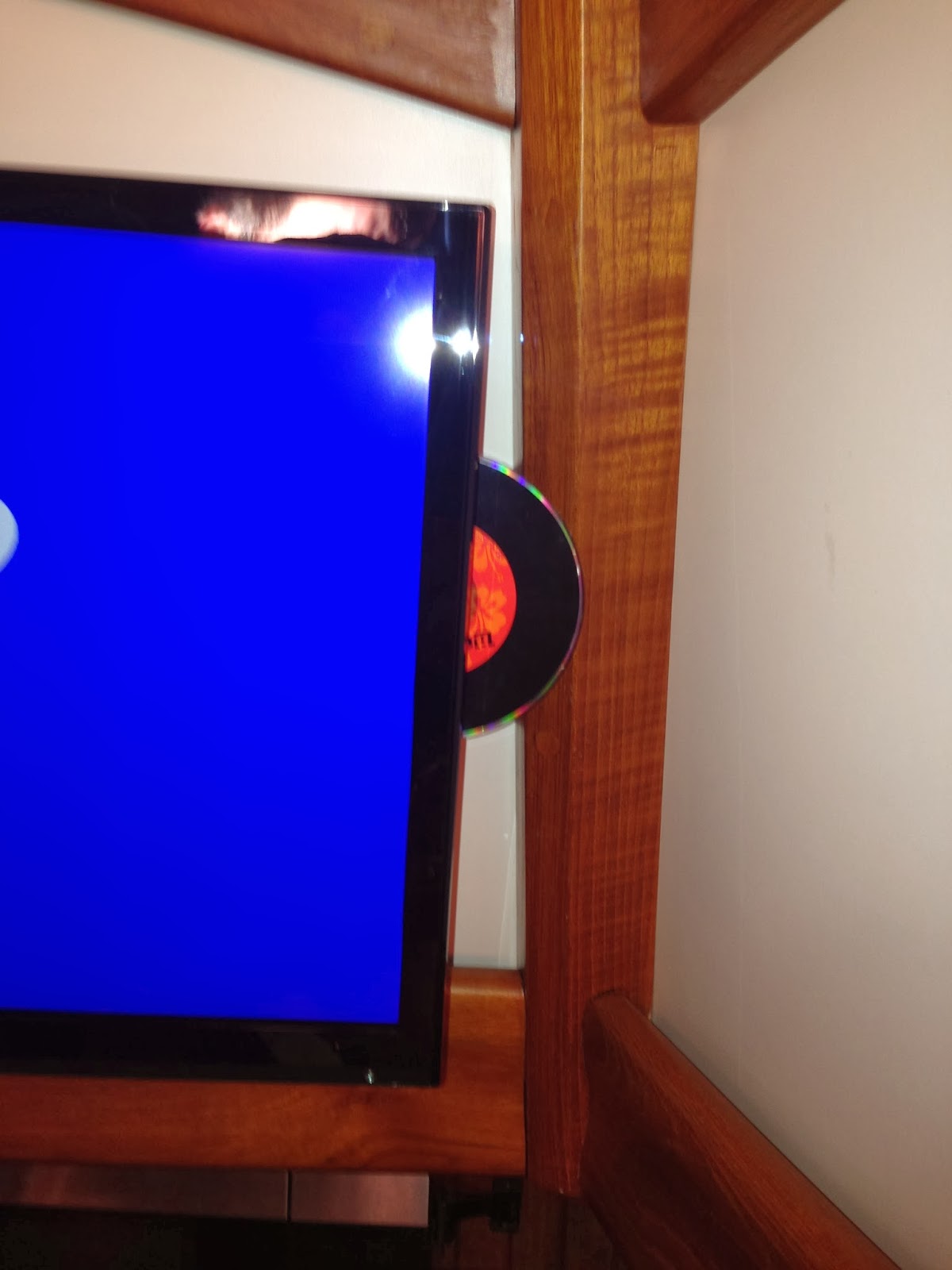 Posted by S/V CarolMarie at 8:38 AM No comments:

It's been a while since we have posted, but several news worthy events have occurred.   The new watch commander below, who is ever vigilant, got on me for not posting enough last year.
Of course the winter snow came and hit the boat, but not enough to cover her up. 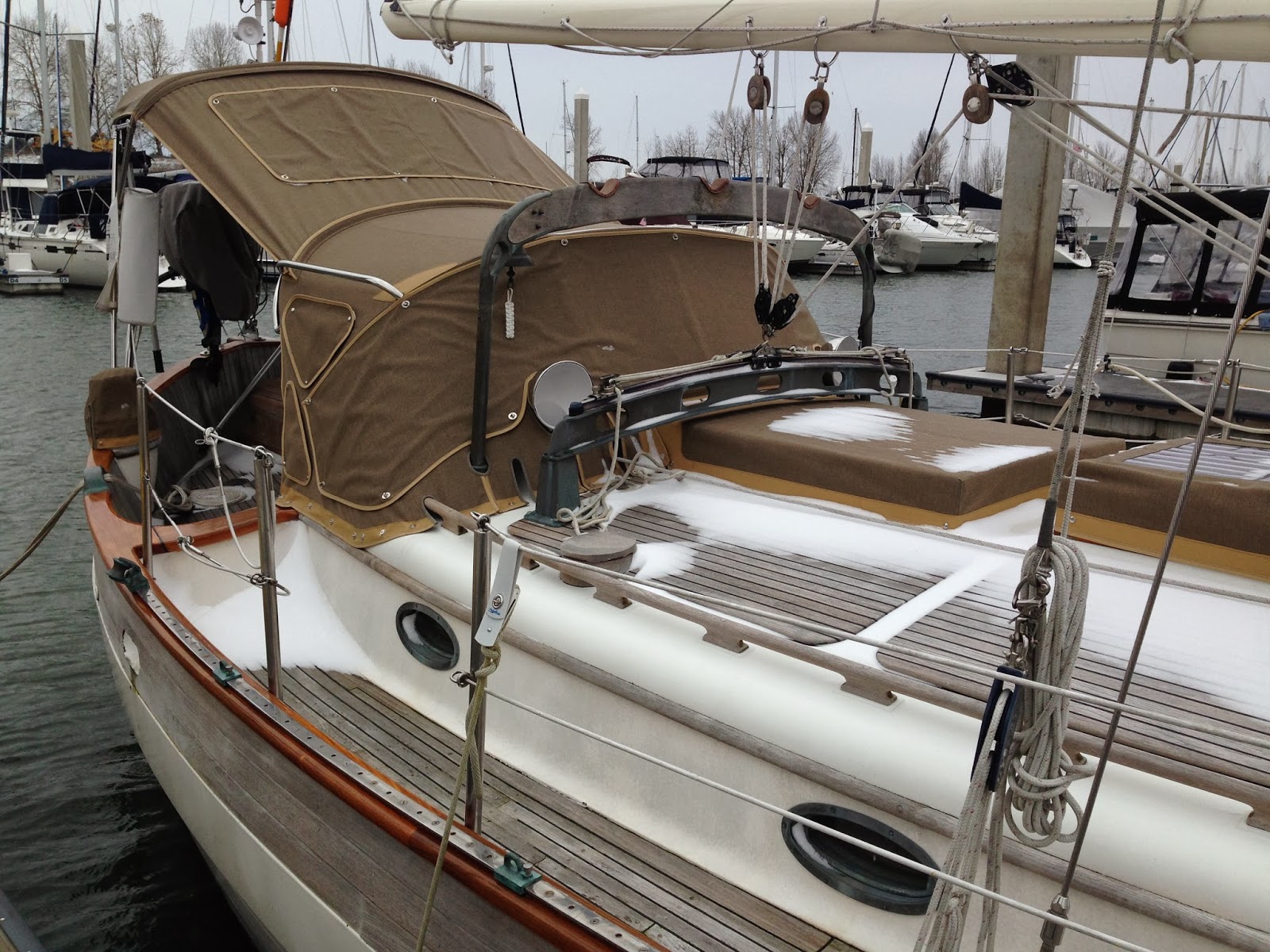 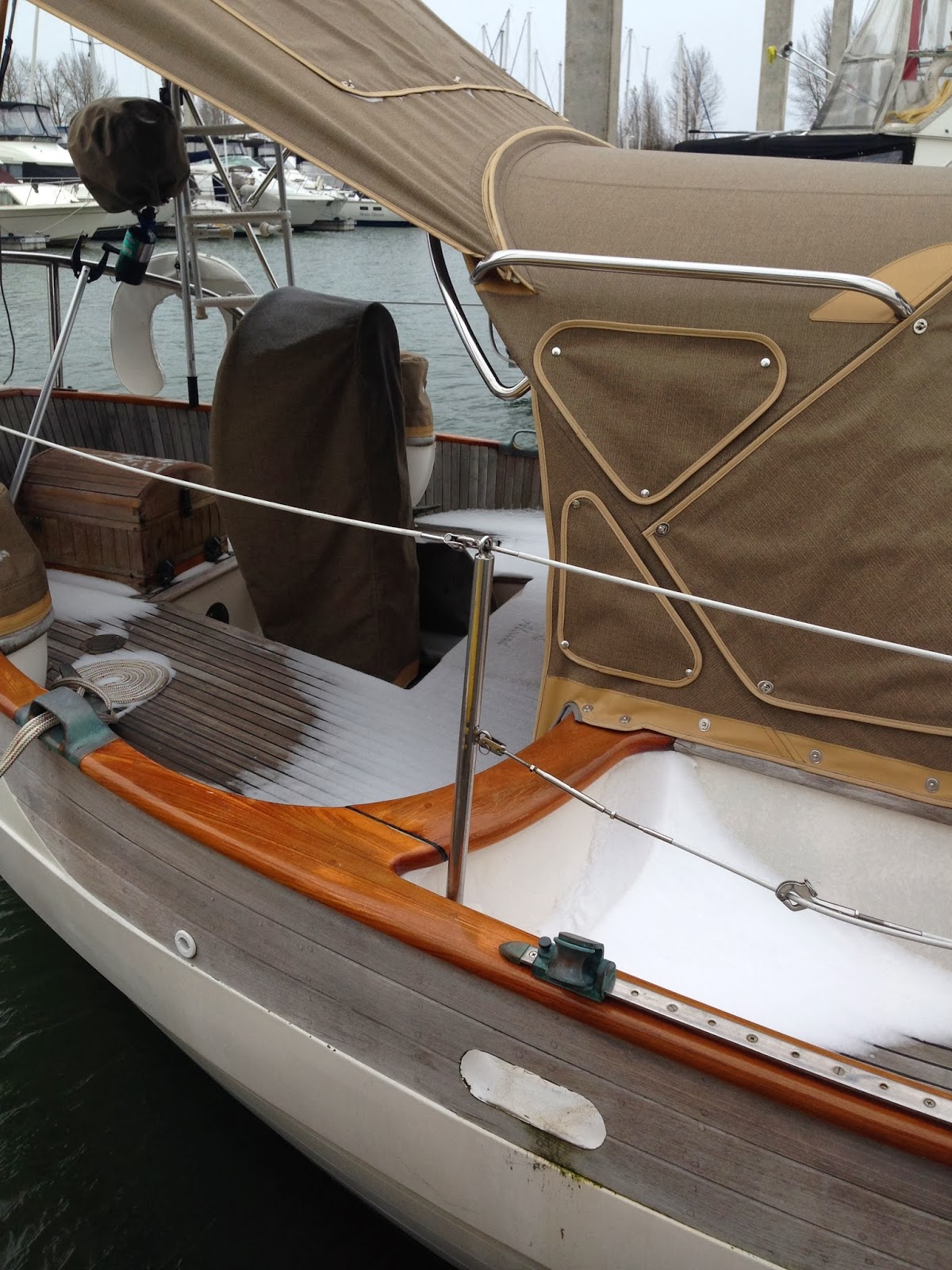 All was fine the boat, but we did loose our starter battery.  We replaced it last week with a new one, but not without personal injury.  In removing the older starter battery I dropped one of the house batteries on my ring finger causing it to swell to 3 times the norm size.   Needless to say my grandson learned how many swear words I could shout in an instant of time.

With the Cap'n of Ranidan, I finished my OUPV course and will be a USCG Cap'n upon completing the packet for submission.   The course was excellent and recommend anybody needing a refresher or wanting a OUPV license to go through the Columbia Maritime Institute. 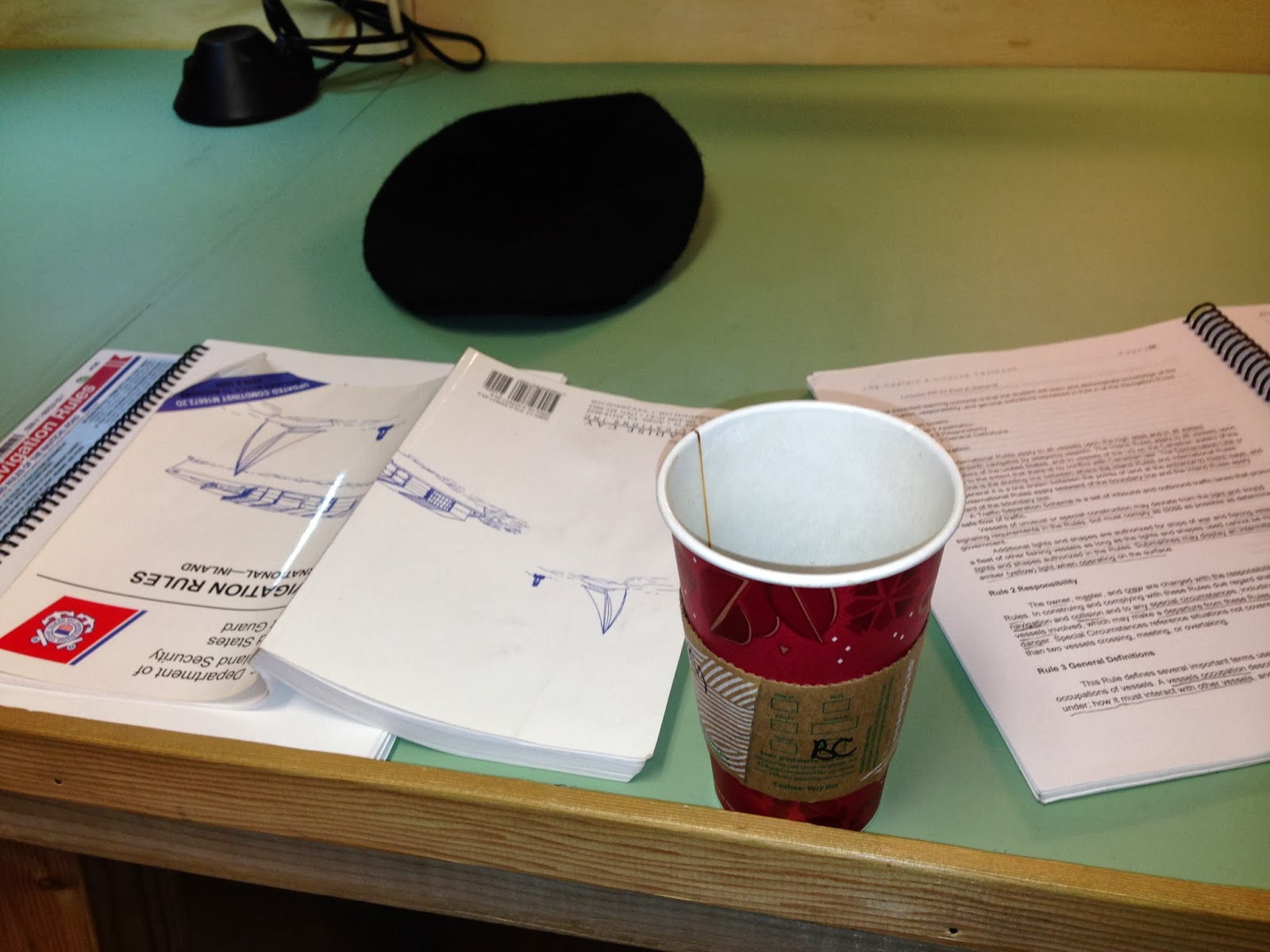 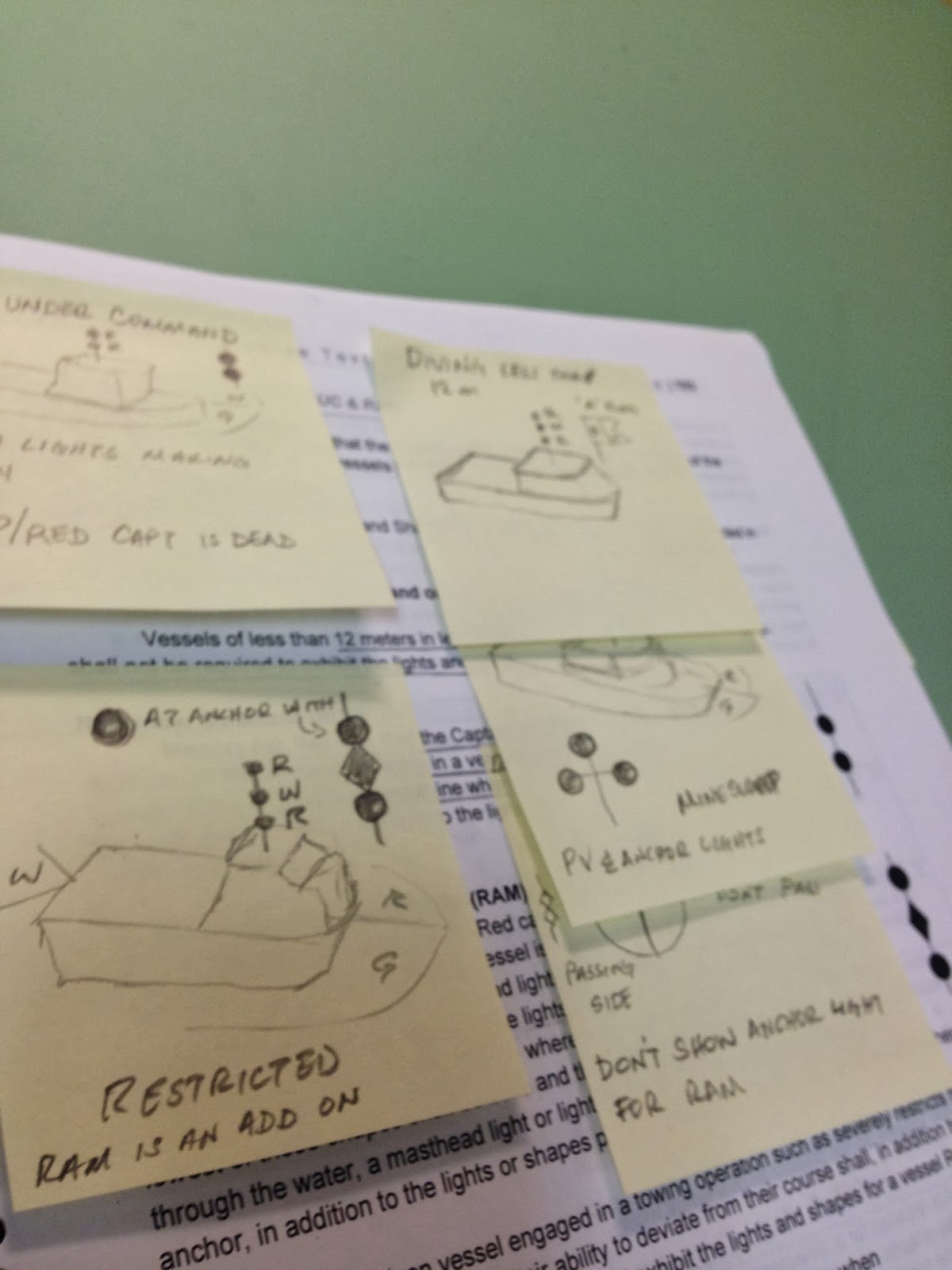 Finally with dreams of sailing, I built a little boat waiting for boat-show season..... 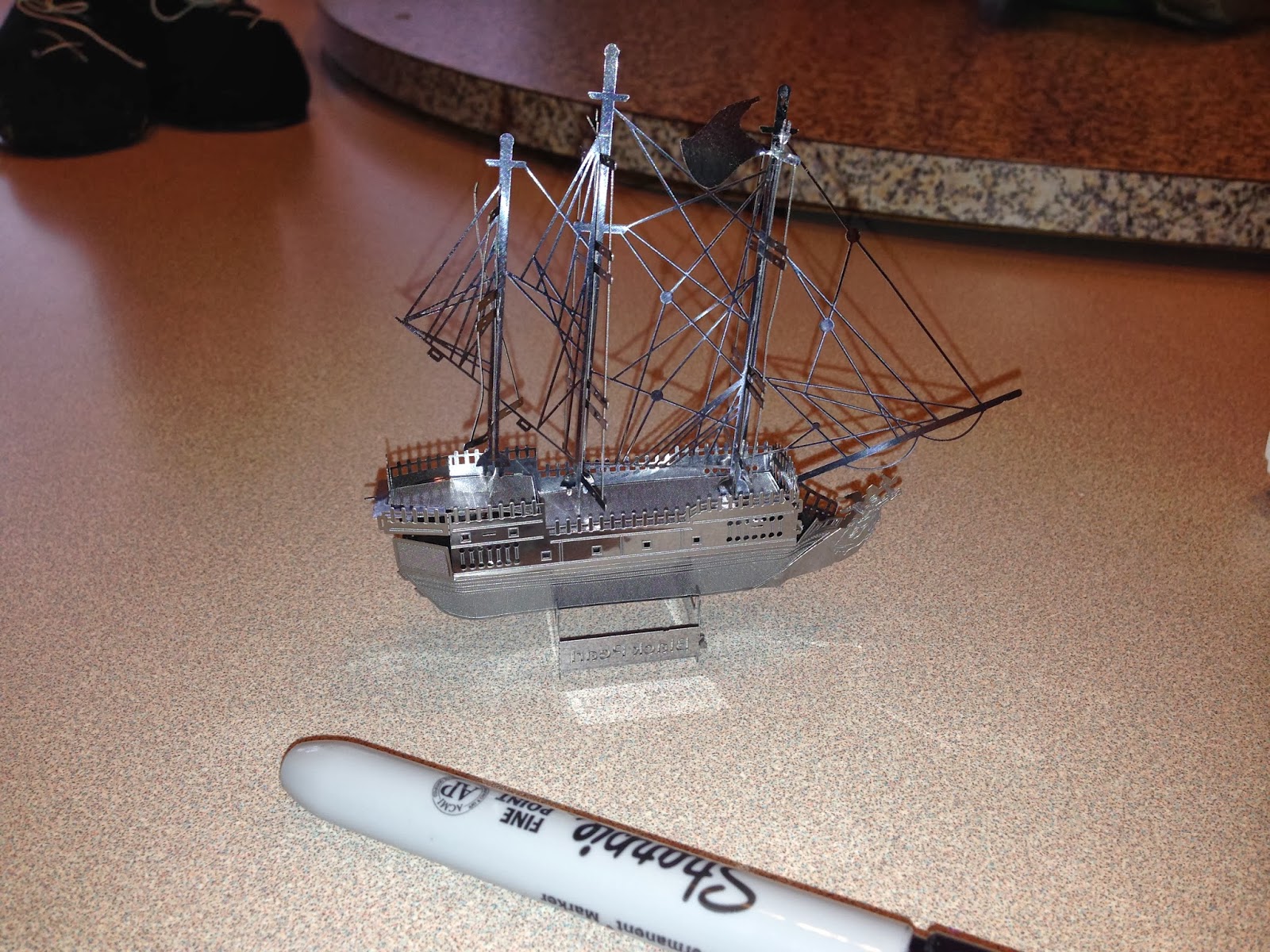 Posted by S/V CarolMarie at 9:56 AM No comments: