Here's the food as we finished it at home: 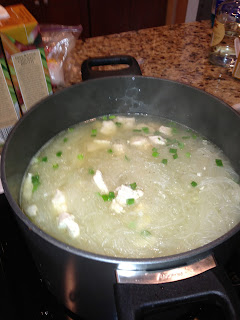 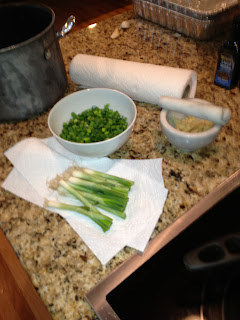 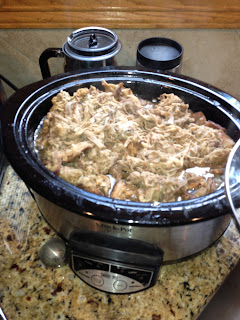 Needless to say all the food was gone, we fed about 50 people including the Coast Guard Aux Volunteers.  Happily they inspected the carolmarie, and she passed with flying colors.  Here's her decal proudly displayed on the mast. 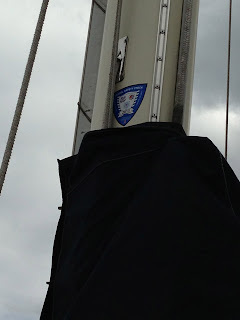 Our plans for sailing this coming weekend were dashed last night.  We got a call from the vendor doing the brightwork on the boat.   She told us she had just finished putting 5 coats of Bristol Epoxy on the cap rail and all the stantion were down, so there were no life lines up.  The stantion rest against the cap rail so to make a clean job, she removed them to enable brightwork under them.  She has also done an awesome job at taping the boat off to apply the epoxy.  Since there is one more coat to go, after sanding there is no reason to pull the tape off and only to apply it again soon.  I went to see her last night and took a couple of pictures in the dark.  The carolmarie really shines now. 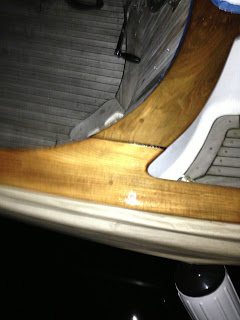 Well the pieces are all coming together to bring the carolmarie back together.  I received the boat graphics from Kevin and Linda on Thursday.  They look amazing and will look great on the stern. 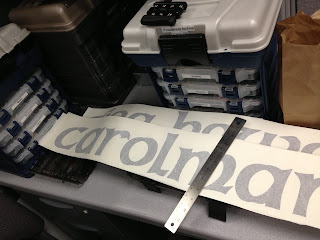 Posted by S/V CarolMarie at 9:42 AM No comments:

We received the official documentation in the mail today from the Coast Guard.  She is now ours!!!  It took only 4 and 1/2 months to receive it with a title search from the USCG Documentation center. 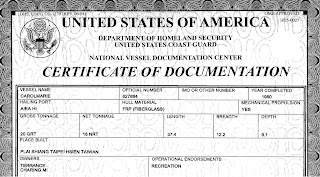 So now we are waiting to get the graphic done for the party....

Posted by S/V CarolMarie at 9:15 AM No comments:

The new sails came in from Lee Sails on Saturday.  We had intended on going out to the Columbia and watching the opening day races, but the tax guy called.  We needed to rush over to his office to pick up the paper work before he left for the day so the sails sat in the cabin for the night.

The next morning I sent a text to Katie (our daughter) and Kevin (our friend) inviting them to go sailing with the new sails.   Kevin brought along Linda and Sarah for ride.  We spent about an hour putting on the new sails while the wind blew out of the north-east about 10-15 knots.  By the time we got the sails on and out in the river the wind dropped to nothing.  With the sails up we motored past Hayden Island eastward, to catch the end of the fleet finishing the opening day regatta. Turning off the motor there was no wind and we began to drift backwards.

Suddenly from behind us a front rushed in from the southwest blowing us eastward. The new 110 jib lifted the front of the boat as we hit 5.1knots heading up river on a reach. We ran with the wind until we passed the airport about 1/2 a mile from the 205 bridge.  We turned around because it was nearing 5:00pm.  As we turned another front came in on top of us creating winds over 20knots.  Kevin and Linda were up on the  foredeck trying to stow the new sail. I was afraid I'd loose them in the river from the gusts and the bucking on the boat.   Finally Kevin decided to tie down the jib and we'll stow it at the dock.

When we got to the docks, we pulled the jib off the boat to fold it on the deck.   While doing it, my iPhone 5 dropped from my pocket making a splash as it hit the water. Watching the silvery back sway back and forth as it descended 22 feet to the river's bottom, was hard to take.  Adding insult to injury Kevin pointed at the bubbles rising from the water stating, "I guess the fish are using your phone, there are bubble coming up."  Well that's where the great photo's are too, on the bottom.

Spring break in Oregon and spring break in Hawaii, meant it's time to see the grandkids and take in some sun on the beach.  So we flew this time all out to Oahu to visit the grandkids.  We also visited our future home for Carol-Marie at Ko'Olina (http://www.koolinamarina.com).  The marina staff were very nice and walked us around the facilities. We also had a chance to visit the  Hanauma Bay Nature Preserve on Oahu.  The preserve was re-established by the City and County of Honolulu in the 1990's after recognizing the damage done by years of neglect and abuse by allowing some three million visitors annually.  The plan they came up with now implemented is centered  around a Marine Education Center in August 2002.  Additionally they restricted the number of visitors a day, and invitied volunteers to help patrol the beach to educate visitors and snorkelers.  Hanauma now has a site where its education program flourishes. A short video welcomes residents and visitors, encouraging them to join staff and volunteers as stewards of this precious gift of Hanauma and other living reef environments they may visit. 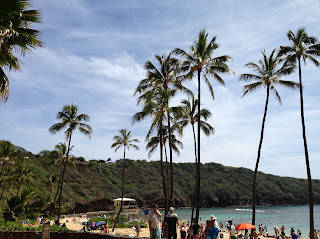 I worked with the grandkids on guitar, although I think he's going to have to get a little bigger before we progress to a real guitar. 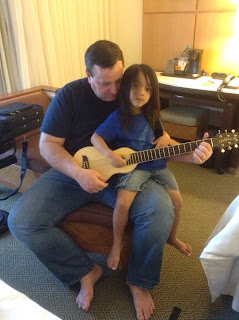 Once we got back I worked on installing the new TV antenna.  It wasn't as hard as I thought going together fairly easily, and routing  turned out to only take an hour. 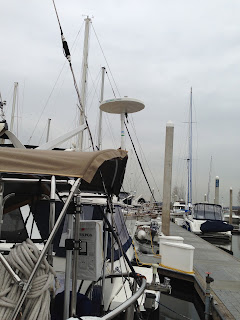 Hayden Island Canvas finished the BBQ cover and it got mounted over the weekend too.  It's odd that it sits on the T-rail track but on the outside track will be over the water. 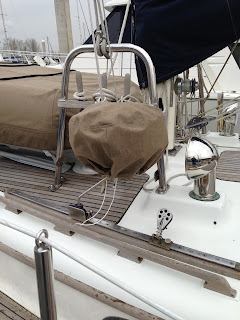 The car rail too is coming along nicely.  Sanding, and prep are everything in getting the brightwork done properly.   We have decided to use Bristol Epoxy to coat the rail.  According to the staff at Columbia Marine Exchange the two part epoxy won't yellow, crack or buckle and has a 10 yr life.  I was never a fan of Cetol, but after 2 Catalina's with teak trim and the Norsea 27 which had as much teak as the Hans per square inch, I am tired of varnishing every year. 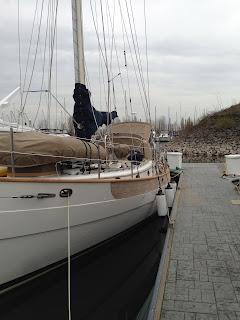 We swung by West Marine and found a match to our broken spreader light.  My co-skipper couldn't wait to get everything fixed.  Jim and I hoisted her up to the spreader over the weekend to scope out what will be needed to install the new light. 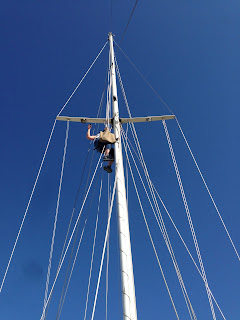 What she is actually doing is taking some pictures of the  broken light so we know what tools we will need to install it next weekend.  Here's the photo's she took while she was up there. 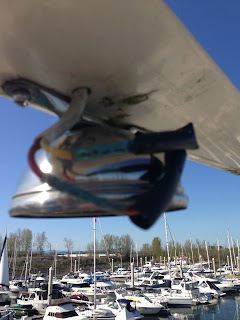 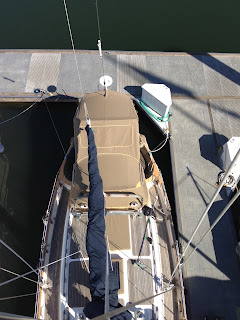 Posted by S/V CarolMarie at 6:02 AM No comments: