With the lack of summer sailing due to work, coupled with the fact I missed the cruise I was to host, I made a vow to try to make every cruise that SIYC had for the next year.  Last weekend was the 2015 Thanksgiving Cruise, which is held at Hadley Landing annually.

Hadley’s landing is down the Multnomah Channel from the Sauvie Island Bridge less than a mile.  The landing is a favorite of Russian immigrant fishermen who frequently drive to the city owned park and fish from the dock.  The landing was named after Mr. Hadley who held the position of director on the Oregon Marine Board for many years.   The last time I was at Hadley’s landing was with my kids when they were 5, and 8 years old.  Both kids are in college now.  The dock is certainly showing it’s age from what I remembered. 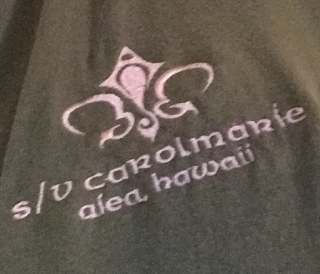 Charing had ordered us nice new shirts for the cruise and I wanted to look all Bristol upon arrival.  She had been taking care of here dad in San Diego and was scheduled to come back on the last day of the cruise.

My journey started on Saturday November 21st.  I woke up early scrambled to the Safeway for ham, potatoes, and a pumpkin pie.   I also stopped by the local gas station to fill up my new propane tank.   While the first task of shopping went off without a hitch, the propane tank ran into problems.   I don’t know if was the fact it was 6:30am or the lack of a skill attendant but the man was unable to put anything more than a 10th of a pound into the tank.   He couldn’t figure out how to purge the tank either.  So I was hoping S/V Rowena would allow me to use their kitchen to cook my contribution to the meal. 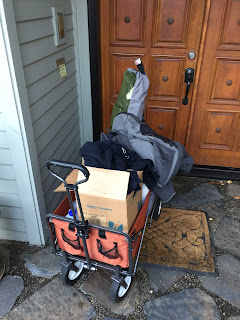 I got home and loaded all my belonging to take on the trip onto the boat’s wagon.  Locked up the house and I was ready to go. 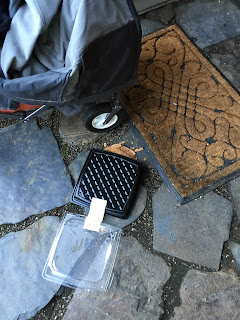 I tugged on the handle of the wagon, when in a microsecond a thought flash through my head that I had forgot something.  Back in high school we called that time period the idio-second, the time when you release the car door handle as you slam it shut, while you remember you just locked you keys inside the car.  My idio-second flashed, I had forgotten in my haste to secure the pie.  Of course the moment the wagon moved the pie’s container sprang open and it fell to the ground, top first.  Well another delay in the cruising plans whilst I clean up spilled pie. 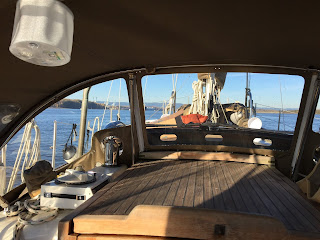 Once the mess was cleaned I pulled the wagon the ¼ mile over to the boat and loaded everything aboard her.   As the clock on the ship read 8:00am I left the slip bound for Hadley’s Landing.

The I-5 Bridge’s tender was hailed on the VHF radio.  In his pious tone he corrected my query about the mid-span clearance and said it was 68 ft more then enough room (4 ft extra ) for the mast to go through. 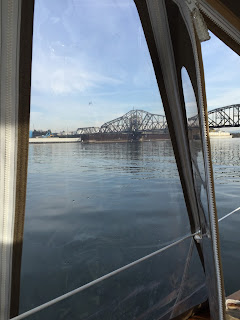 I motored under the bridge, and entered into the most dangerous part of the journey.  Seeing the Vancouver Railroad Bridge was closed, I’d have to circle until it opened.  These circles are where the danger exists, because if the engine was to suddenly stop there is a risk of being pushed into the downstream bridge.   A collision of the bridge and mast would either result in dismasting the ship or turning her on her side and pushing her under.  The first of the two scenarios is always the most likely.  I waited for the morning Amtrak train to cross the bridge and the operator swung the bridge open. 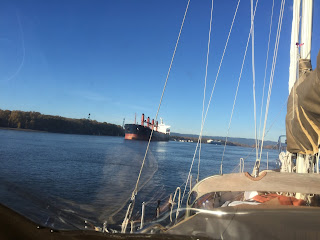 Motoring through my journey now continued down river toward Kelley Point where the Willamette River dumps into the Columbia River.  I was amazed to see a car carrier unloading cars, because it had run aground.

I turned around Kelley Point and entered into the calm waters of the Willamette River.  It wasn’t long before the 2.5 Nautical Miles had passed under my keel and I entered the Multnomah Channel.  I passed by the Yacht Harbor where I moored my two previous vessels the River Bee and Merlita.  Within 30 minutes I was at Hadley’s Landing and tied to the docks there. 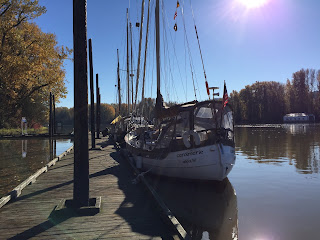 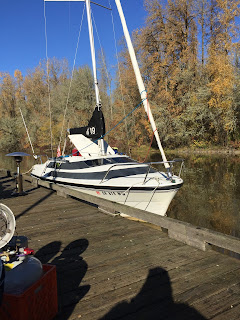 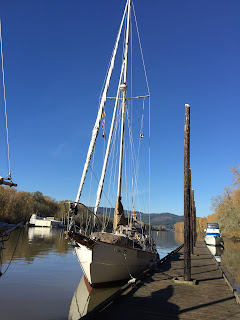 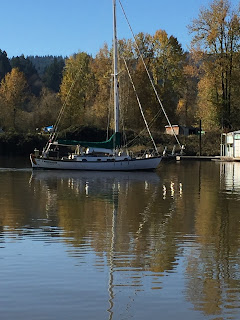 I set up my chair and had a great time chatting with friends.  After a while I started the diesel heater in the boat, and the CarolMarie was soon warm and dry inside. 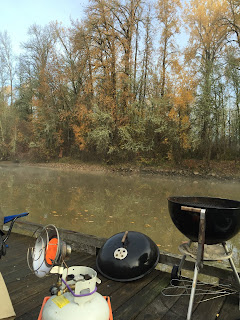 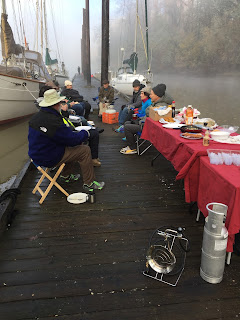 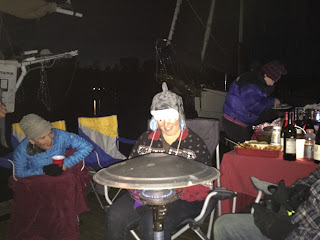 We had a wonderful dinner, and time carrying on.  The winter cold had taken too much out me and I turned into bed early. 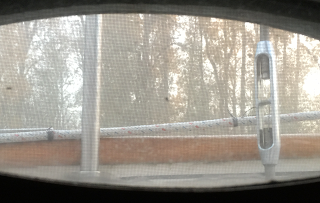 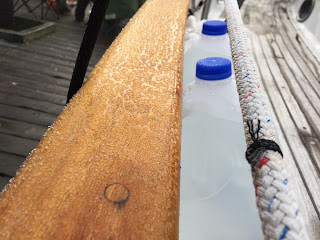 As I peered through the porthole in the captain’s bunk the early morning sunlight illuminated ice and frost on the rub rail.  I knew then it was going to be a chilly morning.  Ice and frost covered the decks of all the boats as well as the public dock. 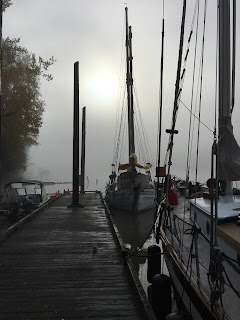 After a great breakfast, one by one every one raced back home to tie up their boats before the rains came later in the day. 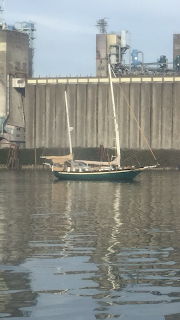 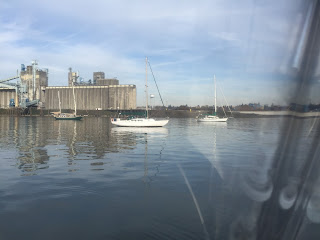 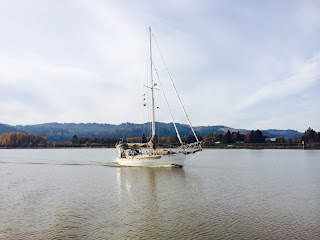 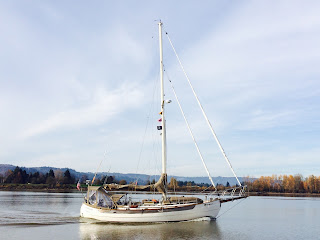 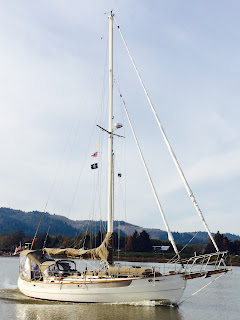 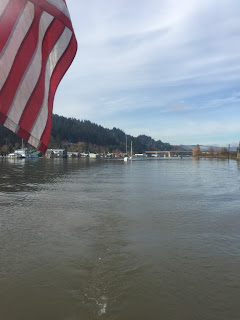 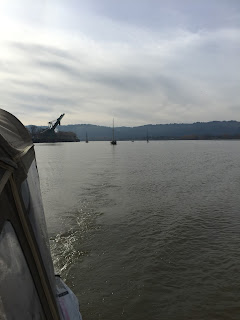 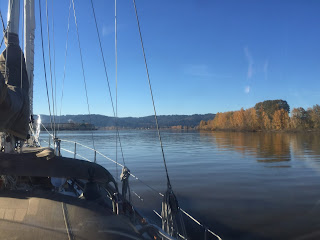 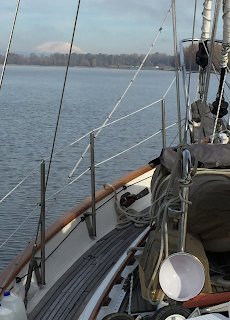