Last week the CarolMarie went out with the for a daysail with Kevin, Sarah, Linda, Linda's Mom, Alisha, Ray, Rachel, and your capt'n.

Just outside the marina, on the Columbia River we through up the kite, into 10-12 knots of steady wind.  The CarolMarie took off, flying upriver into a 3/4 knot current on a flooding tide, doing 7.2-7.5 knots over the water. The conversion shows that's 8.25 mph over ground.

Thanks to Ray McCracken for taking the photos.

Posted by S/V CarolMarie at 9:47 AM No comments:

When we bought the CarolMarie it came with all kinds of things on board, some useful and some not.  I saw this old radio, then thought to myself, that can't be useful.  This past winter my mother found an old copy of Chapman's Piloting Seamenship and Small Boat Piloting, circa 1980.  Yes before GPS systems.  Within the book there were wonderful write ups on how to navigate and pilot a boat using Radio Direction Finders.

I finally sat down this weekend and put the knowledge to the test.  Here's what the thing looks like: 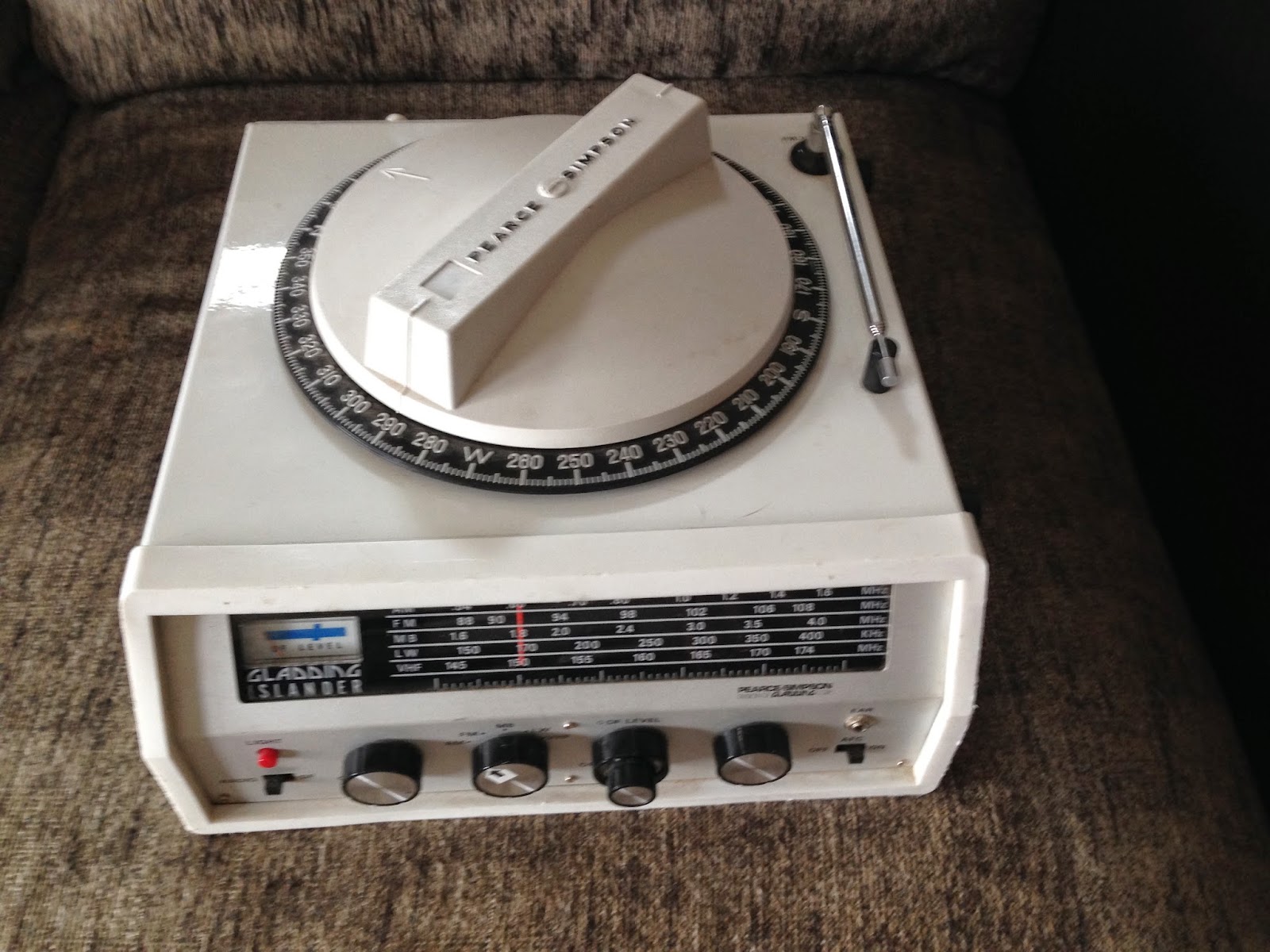 The theory behind this is, on AM radio stations it's assumed the radio waves come from two type of energy; electrical component and the magnetic component.  The two components are orthogonal and out of phase form each other.  RDF devices have two antennas, one that's a vertical monopole and the other a ferrite loop antenna.  In the picture above you can see the telescopic monopole antenna and the ferrite loop is under the wheel on dial on top of the box.  The  ferrite loopstick antennas respond mostly to the magnetic component of a radio signal and the maximum signal is received when the antenna is parallel to the ground. 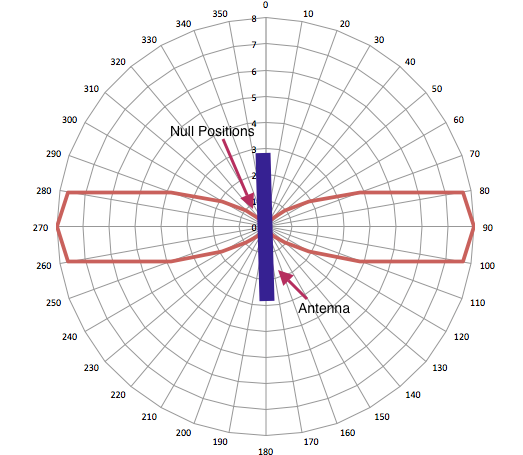 Above is a typical polar plot for a ferrite loopstick antenna.

The first step is to position your box in a fixed place, it can't move throughout the readings. The second step in to actual set the compass direction on the black ring with your magnet north.  The RDF part works by first turning on the radio and finding an AM broadcast station with the monopole antenna up.  The monopole remember is capturing mostly electrical energy emitted from the AM transmitter.  There is a selector switch on the bottom of the RDF device that switches antennas, you start by using to monopole to tune. I selected them randomly from whatever I could receive.  Once the station is tuned in you switch over to the ferrite loopstick antenna.

Two import other dials now come into play, the BFO and the antenna gain. BFO stands for Beat Frequency Oscillator, which is used to create a create an audio frequency signal where the the listener can vary the output audio frequency.  This audio signal is useful to correct for small differences between the tuning of the AM receiver.  The BFO creates a higher pitch noise as you drift near the signal, allowing a precise tuning.   The antenna gain allow the sensitivity of the antenna to change on that frequency.  Tuning the gain to the edge of the antenna's ability to capture the signal enables the directional effects of the ferrite loopstick antenna to be most sensitive to the broadcast frequency.

Once the station is tuned in we listened for the call sign of the station, then dialed in the null regions of the signal by rotating the dial. 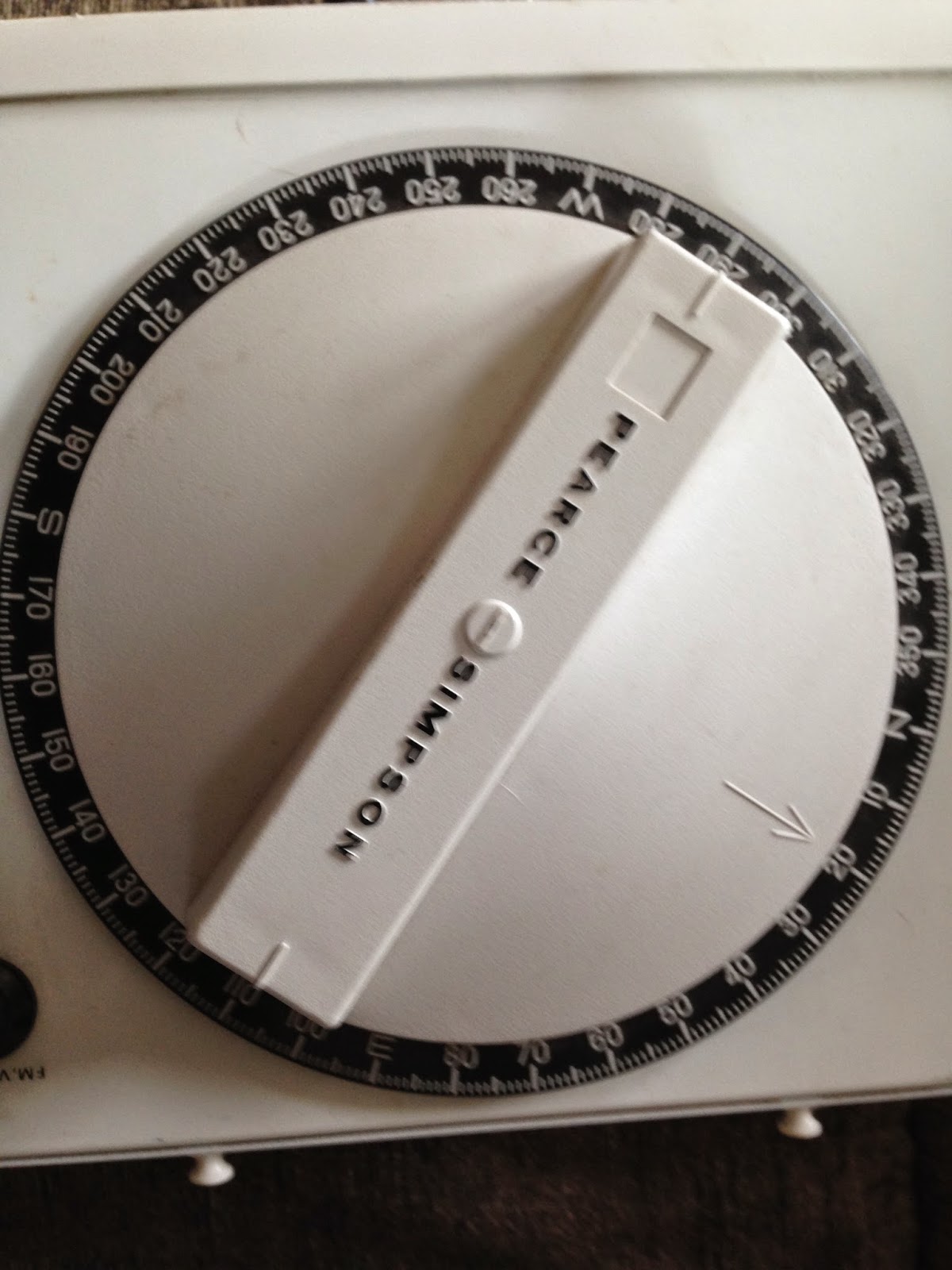 The direct of the signal is thus orthogonal to the null fields in the direction of the arrows, see above.  This same procedure was done for two more stations after the first reading was taken.  We recorded them on a Maneuvering Board. 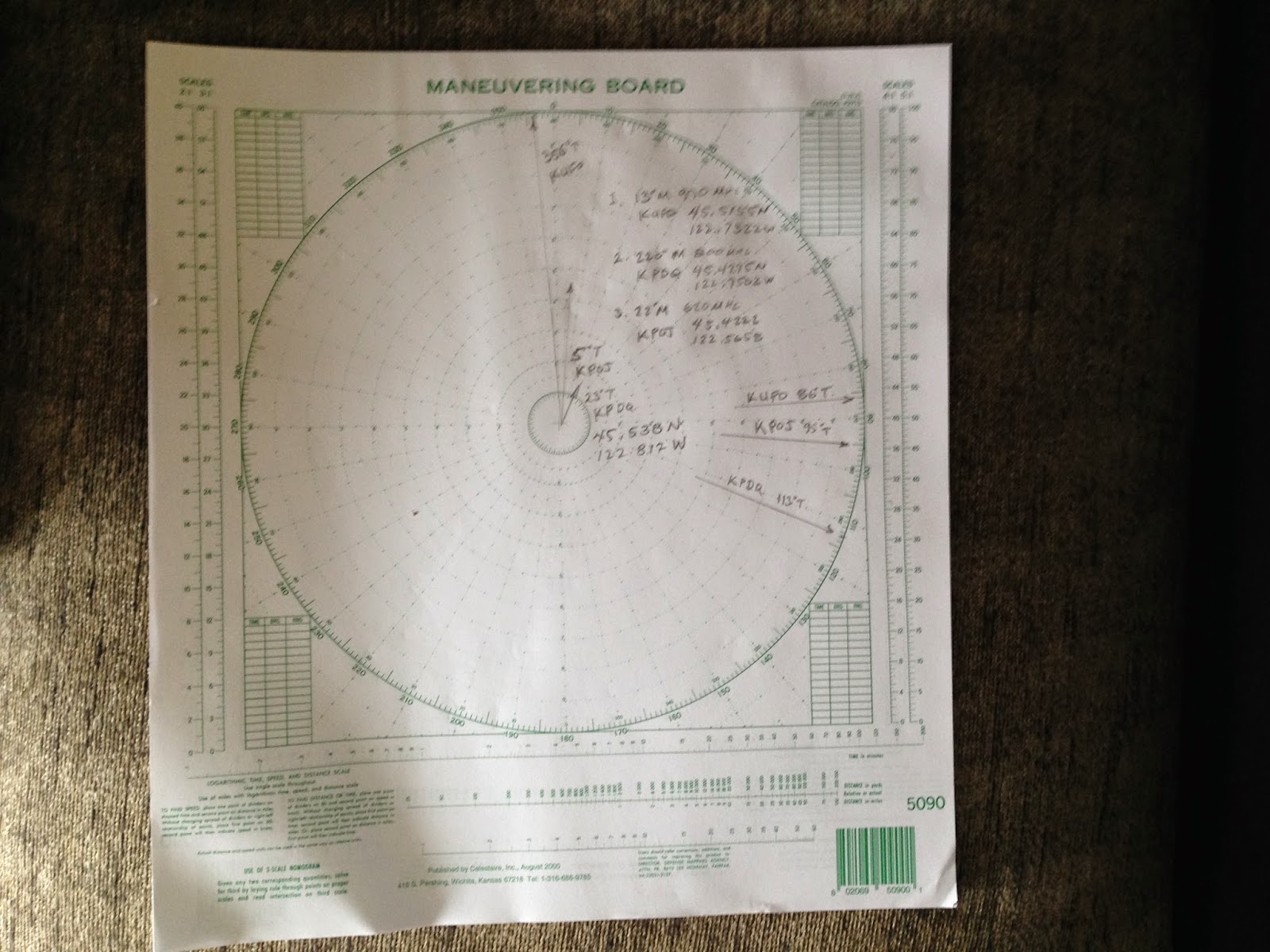 Once recorded we found the broadcast antenna positions at (http://www.radio-locator.com/cgi-bin/locate?select=city&city=portland&state=or&x=0&y=0).  Typically this information is found on nautical charts for towers along the coast.  The three stations we tuned in were to the south or south east of my house where we did the experiment.  They were KPDQ, KUFO and KPOJ.  Once they were plotted, a reciprocal azimuth was plotted from the maximum emission of the antenna (remember it's 90o from the null direction).  See figure below. 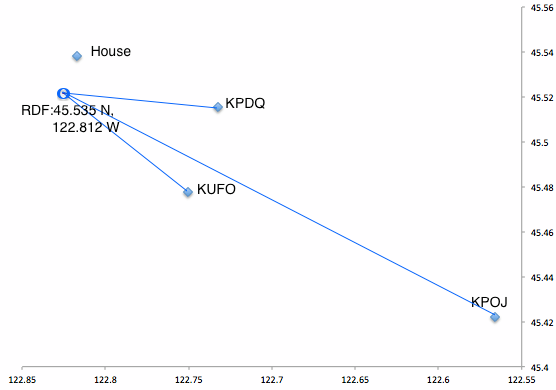 After the plotting was done or position was resolved to be within 0.4 miles or 700 km from the actual position from GPS.

According to Chapman's this error is bad since they were saying it's accuracy is within a mile.  Additionally, the azimuth reading to broadcaster antenna was likely only accurate to +/- 2 degrees.

Living in Portland produces other errors too, like the effects of the west hills which are east and to the north of me.  The hills cause perturbations in the electromagnetic field as the signal reflects and bounces off the hills.  The experiment was done in the back of the house on the deck, which likely caused reflections of the EMF off the house.  With all the error sources I am thinking I might get a better result out at sea.

Chapman's went on to say there is an effect as one nears the coast which draws the signal further from the shore.  The resulting effect is your position is likely to appear to be closer to the shore then you actually are, but they weren't specific about either how close that effect appears or quantified it's impact.

Chapman's also discussed the effect of the sun and solar radiation on the signal.  Practicing during daylight hours only made the nighttime readings easier, they said.  Another factor about using RDF at night was the issue that the FCC allows some stations to broadcast only during the day while others are allowed to have a higher gain setting at night.

There are two other ways to use the RDF device for coastal navigation.  The first is to use the technique to supplement triangulation off of two other fixed points to find cross lines of position.  The second is to ride a wave in, literally.  By riding a wave you tune to an AM station who's antenna is at or near the place you'd like to go on land.  It works the same if the station is 90o from where you'd like to go.   Then you tune in the station on the RDF, and keep the signal strength constant.  Thus you'll hear the radio fall off as you steer more than 2o off course in either direction.

So if GPS ever goes down, I now have a technique to navigate, which in the end still works and isn't too bad.

Posted by S/V CarolMarie at 6:29 PM No comments:

Email ThisBlogThis!Share to TwitterShare to FacebookShare to Pinterest
Labels: How To
Newer Posts Older Posts Home
Subscribe to: Posts (Atom)