It's that time of the year that I always remember the first cruise I went on.  It was in October 2001 on our Catalina Capri 25.  My son and Daughter were very young, and we went to Coon Island with the Catalina Owners for the Halloween Cruise.  The kids had a great time, and I have been yearning since then to go out.

We recently came across a great group of folks at the Sauvies Island Yacht Club  and decided to join them for their annual October Cruise to Barlett Landing on Government Island.  Before going off down river I was certain that the batteries were near their end, so with the help of my son we replaced all four of the house batteries. 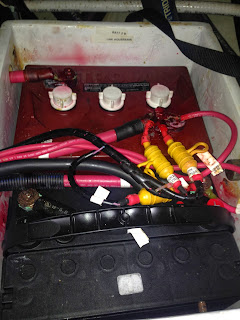 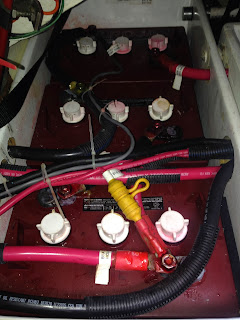 Changing them was dirty work, and they are very heavy.  I wasn't certain on their age and condition, and before going out overnight I wanted to ensure we had power.

With the batteries changed the week before, last Saturday the 19th we worked our way to the marina early in the morning.   The forecasted weather was 70oF high and no clouds through the weekend.  We we certain we'd be crowded out if we didn't get there soon.  I had looked up the location of Barlett's Landing earlier in the week on the web.  To my surprise two other yacht clubs had also scheduled on the same day and the same time. Bartlett Landing is the public dock at the eastern end of Government Island. The landing is part of the Government Island State Park with approximately 400 feet of concrete dock. The outside most dock is subject to thrashing from river traffic, so we wanted to ensure we got on the inside of the docks to have a peaceful nights sleep.  I was a little nervous because it was my wife's first time on a cruise overnight on a small boat.

Needless to say when we arrived at the marina the fog was so thick we couldn't get out. The spiders had been busy through the night and the entire marina was full of webs that had caught the morning fog. 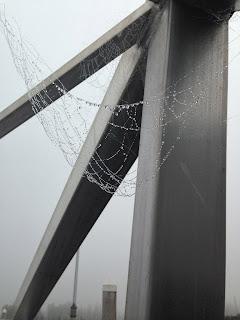 We picked up our friend Jim from S/V Ranidan on the way down.  Jim was the one that introduced us to the SIYC and he and his wife Linda decided to join us.  The fog lifted and we motored our way the 7.5 NM to the docks.  When we arrived we were met by George the Commodore of the club, who'd lined up a host of people to grab line and get us in on the inside of the landing. 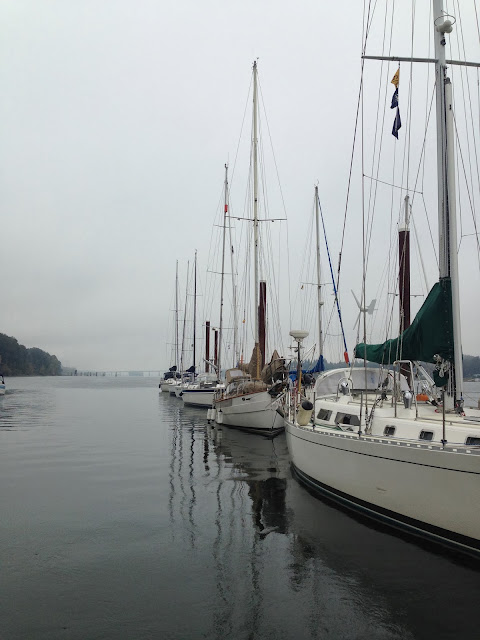 The CarolMarie is the second on down on the inside dock.

Over 10 boats came from the SIYC, in all.  Jim found a great space behind us, and was tied up and ready for a club potluck on the docks.  About half the boaters came in costumes, including myself as pirate.  The club members visited with each other, and on each other's boat as the darkness came in.  We tried out a cheap 400W inverter to run the TV but it only last for about 20 minutes and it was gone. We lit the oil lamp for heat and went to bed.  Even being on the inside the marina was noisy from the continuous trains passing along the Washington side shore.  I felt two heavy commercial boat pass in the night, so I wouldn't say the park is all that quiet.

The next morning the fog had set in and once again we waited for it to lift. 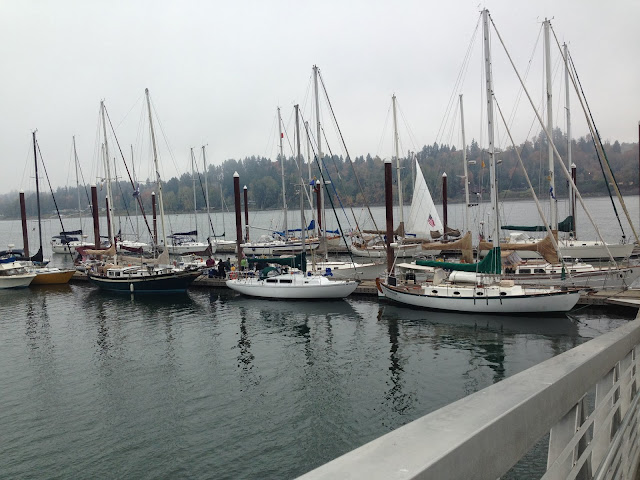 While waiting Jim invited us over to have breakfast on his boat.  Jim cooked as Linda kept us entertained by telling us about her classes and adventures on their NW cruise this summer.  Jim mad these wonderful eggs, and we'd brought over marinated steak left over from the potluck the night before.  The hot coffee seemed to take off the morning chill, as we continued to visit with them.

We made one more circle around all the boat saying our goodbye's.  With the same hospitality we had coming docking a host of people held our stern line and helped push the boats bow down river, helping us get underway. 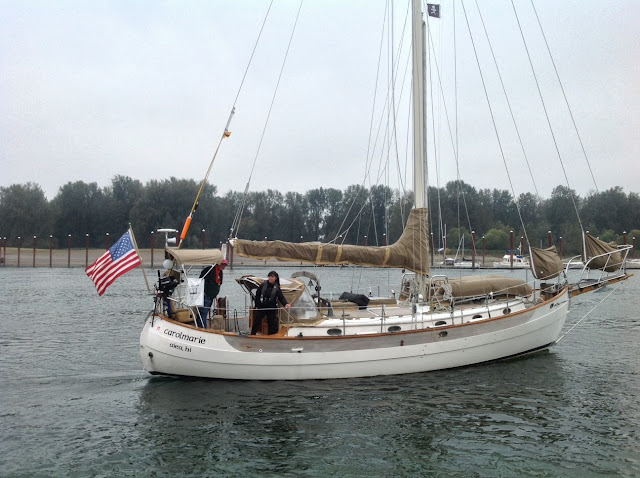 Jim snapped the photo above us return to Salpare Bay.  Charing said she had a good time, and enjoyed her first cruise.  It looks like we'll be going out more, which suits me fine.  I am blessed to have her as my shipmate.
Posted by S/V CarolMarie at 6:50 PM No comments:

We have been working with friends who are graphic designers to come up with the symbol for the boat stamp.  We wanted to include elements of the family crest, a nautical element, and the signature of the boat.  The family crest has two fleur de lys, one yellow on a blue background and one blue on a yellow background.  The nautical element we choose was an anchor. Finally the letters CM were included in the ship's symbol from the name. See if you can see the CM in the symbol. 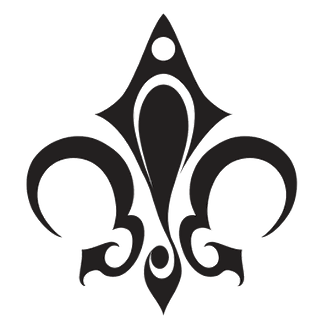 So the final boat's stamp is: 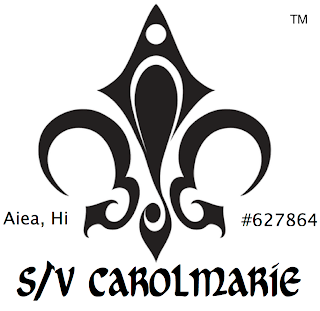 Posted by S/V CarolMarie at 5:27 AM No comments:

Not much cruising has been going on because of boat maintenance.  First the eyebrow was in really bad shape and needed to be repaired.  She was split in a section and cracking, about to delaminate in one area.  In another area we had an issue where the part of teak was missing all together.

We hired a wood worker to replace and repair the two badly damaged areas. The entire job was only $150 including materials so we were relieved to see his pricing.


Next we had the boat cleaned the the cabin roof pads cleaned.  This involved using the West Marine two part teak cleaner and a good deal of scrubbing.

It had been a while since they were cleaned in ernest.  Black soot from the planes, and mold had embedded themselves in the teak's grooves and grains.

Our next project then was to rebedded the chain plate covers.  As you can see from the photo's below the lifted plates were far above the deck, and were leaking water into the boat.  I visited one boat last spring, another 1980 HC 38 MKII where the chain plates leaking caused the holly in the teak-holly  cabin floor to dry rot away, leaving only the teak slats remaining.  That horrible incident was one I wanted to avoid here.


To do the job we used a regular screw drive, razor blade scrapper, a wire brush, a stiff wire, sand paper and a cordless vacuum.

The first step was to use the screw driver to gently pull the plates up to break the seal of the old bedding compound. Care was taken to not apply too much stress, such that the plated would bend.  Once the seal was broken the old caulk was worked out using the razor, and screw driver to free the compound from the cavity in the deck.  When the large pieces were removed we used the stiff wire to pick out the more stubborn pieces, and the wire brush to clean out the cavity throughly.

Using painters tape we next marked off the area around the cavity to catch the over flow. 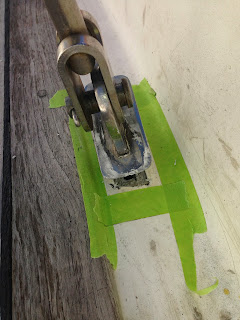 Using 3M 4200 Marine Adhesive Sealant as the bedding compound and a roll of paper towels are the ready. 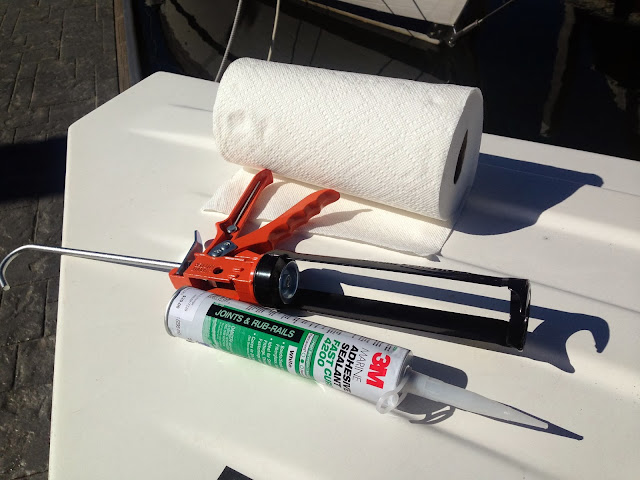 We found the best method was to layout 6-10 paper towels in a stack near the area to be fixed.  Cut off only a small opening in the nose of the tube.  The small opening allows you to work the material under the plates easier and to fill one long side at a time without lifting the gun from under the plate. Once the adhesive was worked into every part of the cavity we'd then push the plate down onto the excess adhesive until it was flush with the deck.  Pushing it down would of course push out the excess adhesive onto the area taped off.  Gross amounts of sealant were then removed by pushing it upward with the fingers and drying them off using the excess towels. Once there was a thin layer of sealant on the deck, the tape was lifted off and applied to the nearby paper towels. Finally the edges were all smoothed out to allow water to flow around the plates freely.

Posted by S/V CarolMarie at 9:42 AM No comments:

Email ThisBlogThis!Share to TwitterShare to FacebookShare to Pinterest
Labels: How To
Newer Posts Older Posts Home
Subscribe to: Posts (Atom)