Cruise Downtown for the Weekend

On Friday April 15th 2016 the crew of S/V CarolMaire sailed to downtown Portland on the Columbia and Willamette Rivers.  We left at 10:30am on Friday, after scrambling last minute to prepare the boat and provision for the weekend.   By the time we got out on the Columbia from Hayden Bay many of the SIYC (www.siyc.org) boats were nearing or at the Vancouver Railroad Bridge.

One other boat S/V Somehow and ourselves needed to wait for the I-5 Bridge to lift.  The river level had risen by 8 foot since we were last out.  At this river level the passage under the mid-span was 62ft which is exactly what we need to go under.   Any wave action would mean we'd impale the bottom of the bridge with our mast.  So we asked for the opening for both boats.

Current was flowing at 2.3 knots so we passed quickly under the bridge.  Approaching the Vancouver Railroad Bridge we waited about 15 minutes for it to open.  With the current we were doing 9.0 knots with a speed in the water of 6.8. 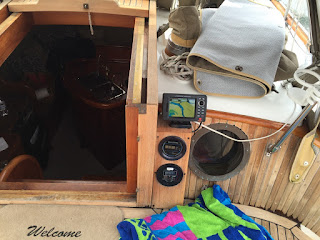 Kona our dog took watch for a while.  Although he couldn't steer he was very good at watching for other boats. 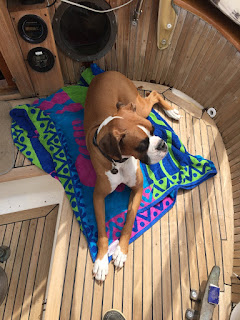 Charing did her part as well by keeping the cockpit clean. 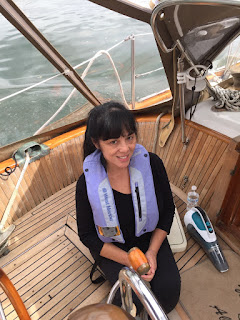 Although Kona took his watch, he didn't really finish it and decided to nap on the deck rather then point at yet another fisherman. 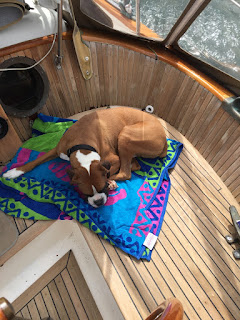 By noon we'd made the turn to onto the Willamette River and were now counter to the current.  Our speed dropped, and the number of fishing boats increased. 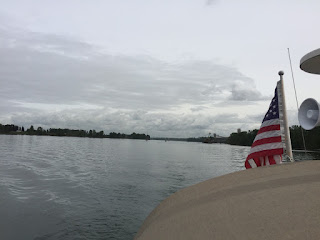 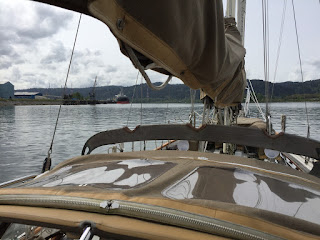 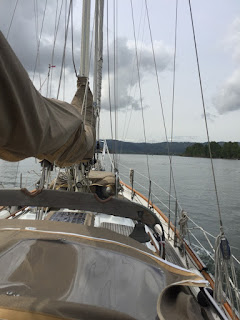 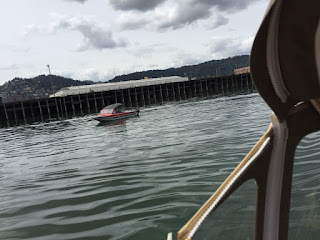 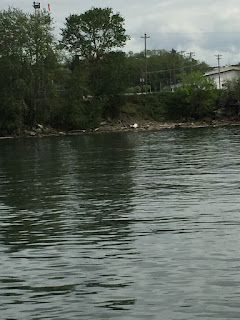 By 13:30 we were at the Fremont Bridge and we could see S/V JuliaMax waiting at the Steel Bridge for all the rest of us. 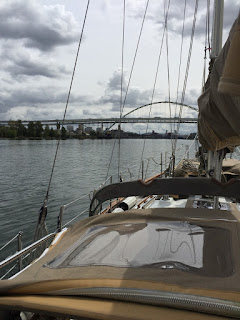 As we approached the Broadway Bridge the traffic on the VHF Channel 13 increased as every body told their clearance needed.  We were the second tallest boat behind Somehow at 65ft.  Before we knew it we went through the litany of bridges opening and closing until we'd arrived at Riverplace Marina. 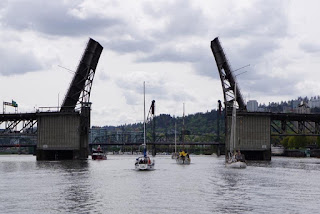 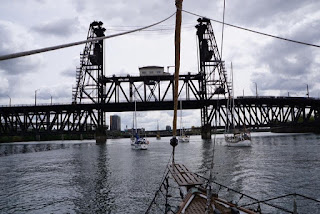 We tied up on the outside of the city docks and paid our fee.  Just afterwards teams of people began flowing down onto to docks to board the Dragon Boats. 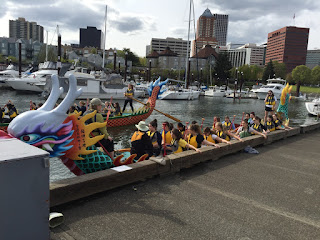 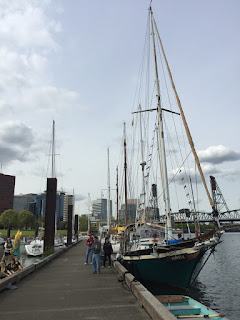 We club had a dinner together on the docks and we turned in early to clean up the inside of the CarolMarie.   It had been almost 5 months since we last been on a cruise and the cleaning was very much needed.  The next morning several of the ladies of the SIYC when on a power walk around the city.   Kona and I did some boat maintenance while they walked.  Installing the new propane tank and changing fuses, etc were the highlights of our morning. 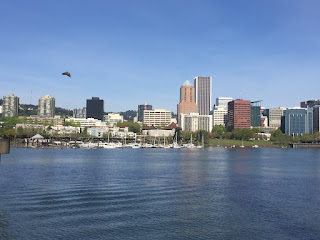 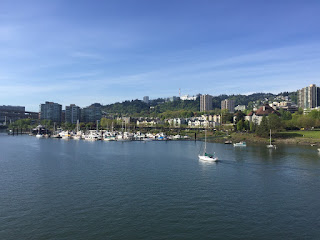 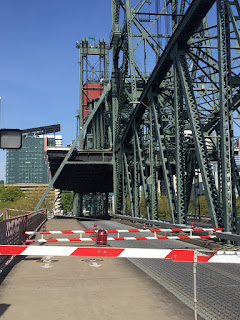 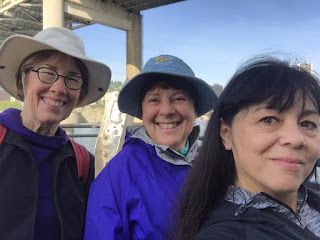 A few walks up and down the docks for bathroom breaks for Kona and he was worn out.   People through the morning came up and down the docks asking about the boats, and photographing themselves with the boats in the background.  Ray from S/V Rowena asked for me to put up our large pirate flag which I did.  He put up a few flags on his boat too, and it wasn't long before flag wars began on every boat in the club, 10 boats in all.  Each time a flag was added on one boat another one was added on another until a sea of colors filled the space from the water line to 60 ft in air.

Kona and I sat on the deck watching people watch us while Charing and others went to the farmers market. 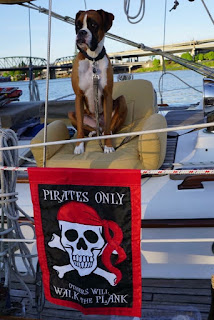 He got the chair while I sat on a cushion.  People would pass us and ask why is he on the chair and you're not.  I respond that it was his boat, which would prompt him to look smugly at the questioner.

We had another great dinner that night on the docks, and more members came by land. 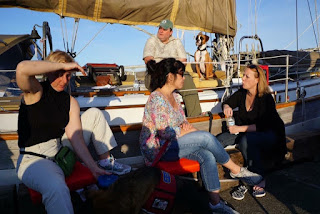 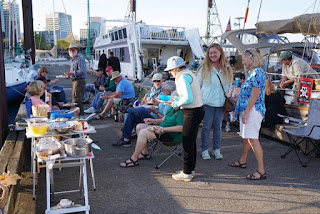 The next morning the we had breakfast on the dock and reversed the process heading back to Hayden Bay through all the 10 bridges lifting 7 of them on the way. 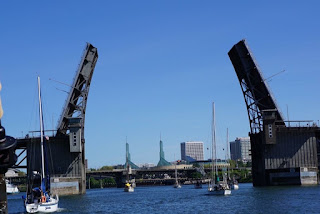 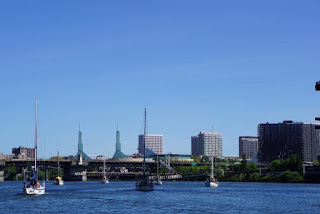 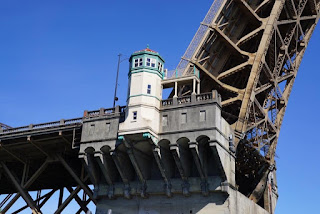 As we went under the St John's Bridge both Charing and I felt like the boat sinking.  By the time we got out on the Columbia it was worse, I turned on the high bilge pump and nothing came out. I look down at the shaft and there was nothing but the bow continued to raise. Then for no reason it stopped raising and boat returned to a normal stance. When we docked I felt the front carpet in the cabin as we were cleaning and it was all wet. I couldn't figure out why.

I went to the sink and there was no water coming out.  Just two days earlier I had filled both tanks, so this lack of water made no since.  It was then I realized the water came from the vanity sink, where the pipe broke.  Since the water pump was on it emptied the tanks into the high bilge until the tanks were dry. We were literally sinking form the inside.

I siphoned out the high bilge, and dried the carpets. 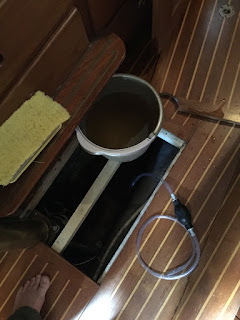 It was a great weekend in the end and wonderful to spend it in Portland's backyard.

Posted by S/V CarolMarie at 7:14 AM No comments: