Hearing Yourself in Someone Else's Book: GOD BLESS Amazon!

My adventure began while unpacking a bin of stuff from our recent move to Southern California.  I came across one of favorite gazettes - my Kindle DX.  My wonderful wife bought it for me years ago, so I was sure it wouldn't work.  I loved this device for two reasons: first it has a free 3G world wide modem built right into it and secondly because it has the capability of text to speech.  The Kindle DX will read just about any book to you from your Amazon collection. As a slow reading dyslexic really appreciated this feature.

Well, I had long ago lost the email account which tied to the Amazon Prime credentials on the device.  Hoping just to get the thing working I de-registered the device and did a factory reset.  After numerous attempts and trying the manual update (just in case you need it - https://www.amazon.com/gp/help/customer/display.html?nodeId=201504450) I had not luck in getting it back on Amazon.

With nothing left to loose I called Amazon and after proving I was who I was, for my new account I explained the problem to their tech support person.  She was awesome; she immediately looked into my old account.  I had a ton of books on the old account and only used the new one to order items and watch Amazon prime movies. (I believe Amazon Prime has the largest collection of sailing movies on the web.). By the end of the conversation the help at Amazon had refunded me my $99 from my new account, shut it down, established my new credentials on my old account and in less then 30 minutes I was $99 richer, had all my old ebooks, and my Kindle DX was working!

Once the Kindle DX was finished the first book that popped up was Breaking Seas: An overweight, middle-aged computer nerd buys his first boat, quits his job, and sails off to adventure, by Glenn Damato.  The book is an auto-biography of his life leading up him sailing off into the horizon, and then becomes of travel log of his adventures. 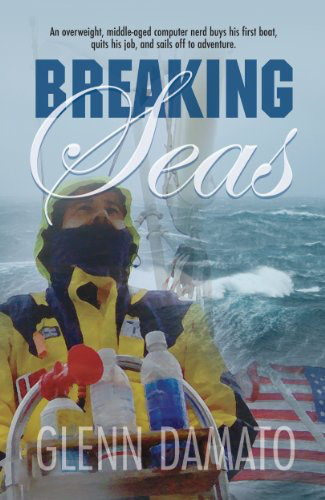 As a Cold War veteran, Glenn found himself in the.technology industry during Silicon Valley's boom.  Much like me, he came just on the tail end of it, so neither of us had Bill Gates like wealth.  Much like myself Glenn read everything on the web about blue water sailing, naval architecture, storm tactics, etc.  He'd become a knowledge sponge soaking up as much knowledge of seamanship as his cranium would allow.  Once again, like your truly purchase a classic boat in much need of repair. Glenn chronicles his next two years of gaining experience sailing in the Bay Area while recommissioning the boat for his dream journey.

Through a series of twists and turns he finally set out under the Golden Gate Bridge, With his crew his experiences along the California coast parallel my own recent exploits. I am not going to say anymore on Glenn's adventure because the ending came as a shocker to me:I spoil it for the anyone wanting to read it

Breaking Seas has become one of favorite books, I actually complete the book in four hours cover to cover last Saturday morning.  Glenn's style, the way he handled and solved problems coupled with his writing style make the book a great book on I would highly recommend

Days 10 and 11 Sailing from Portland to San Diego - Arrival

At midnight I came on watch as we neared Point Conception.  Everything was going smoothly until about 1:30am when I noticed on the AIS we had a large cargo ship about 5 miles away on a collision course with us.  The AIS identified the ship as YM Mandate.  I hailed YM Mandate on the VHF and we shifted to another channel to talk about collision avoidance.  The radio operator on YM Mandate stated he could not see us on radar.  I gave them our position, heading and our bearing to them.  After a brief pause on their side the conversation went like this:

YM Mandate: CarolMarie we can't see you on radar or see you visually.  What do you suggest? Over.

CarolMarie: YM Mandate I suggest you shift your heading 20 degrees to the west to avoid collision. Please confirm over.

YM Mandate: CarolMarie I confirm we will shift 20 degree to west from our current heading.  Please stand by on this channel until passing over.

YM Mandate: CarolMarie this is YM Mandate over.

YM Mandate: CarolMarie are you that small sailboat off to our starboard side about a 1/2 mile away. over.   (I looked at our chart plotter to see, yep its us.)

CarolMarie: YM Mandate I confirm, that is us, over.

YM Mandate: You are a small sailboat, you made us move, over.

CarolMarie: You asked for a suggestion, over.

YM Mandate: Good for you CarolMarie, good night. over.


We went back to our hailing frequencies and I watched as they disappeared from our screen.  By the next morning we were past Point Conception into the Santa Barbara Channel.


The Santa Barbara Channel was full of fishermen, oil rigs, otters, seals and dolphins. A thick layer of fog surrounded us as we'd pass an oil rig or a fishing boat.


About 2pm our autopilot gave out again, this time the motor stopped working.  We are now on the last one.

After dinner the third and final autopilot motor failed.  This was odd because two of them failed in calm seas.  With them dead, the sun setting and us approaching the LA basin I didn't want any chance of an accident while hand steering.  We changed the watches to two on switching people every two hours.  This gave each man four on and four off, except for Bill our cook, how had every other shift five off to cook.

I came on watch after midnight to a sea of traffic as we passed the LA basin.  We were now heading eastwardly.  The night was lit in all directions from the city, the ships, and the oil rigs.


For the last few nights a spider has been building a web right above our heads over on the starboard side of the Bimini.  The web building has been a sources of amusement breaking up the boredom of the watch.
I went off watch at 4:00am, when I woke up it was late into my watch.  Both Paul and Bill let me sleep in, it was about 9:20am when I woke up to a misty rainy fog.

The weather cleared up through the day, winds built back up and we were off to sailing again.  Light swells and no waves.

As luck would have it the dolphins came back at us.  They would come in lined up parallel to the boat, heading direction into us, pushing fish along the way.

We continued motor sailing for a while when we came upon Warship 53 in the distance.  We stay far away from him trying to keep out of their way.


As we got near Point Loma, the Warship turned into the channel for the bay and we thought they'd be pulling in soon.  We had turned off the motor to save fuel and were under sail.

We cut Point Loma close as we were on a heading that would round an underwater buoy at near the end of the point.  The underwater buoy marked the edge of a sewer line that we didn't want to interfere with it.

After a brief dialogue with the Navy and their "warships" we rounded Point Loma to come into the San Diego Bay.

Immediately upon turning into the bay we were faced with a Pineapple Ship from Dole. 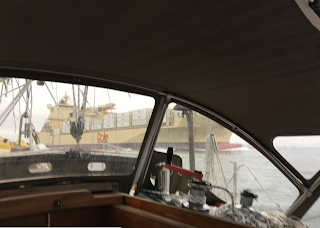 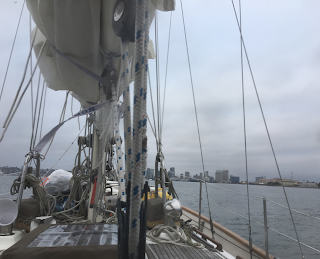 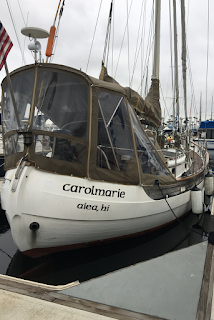 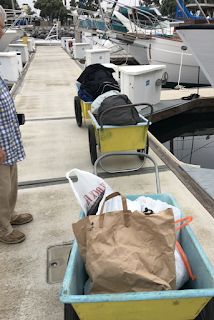 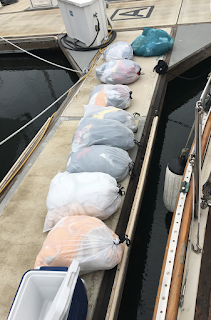