Work has been too busy recently to go out.   But the final touches were done to the head over the weekend, and I think it's finally there.

When we first took ownership of the boat the head was placed sideways in a small closet, on a elevated platform forward of the captain's bunk. 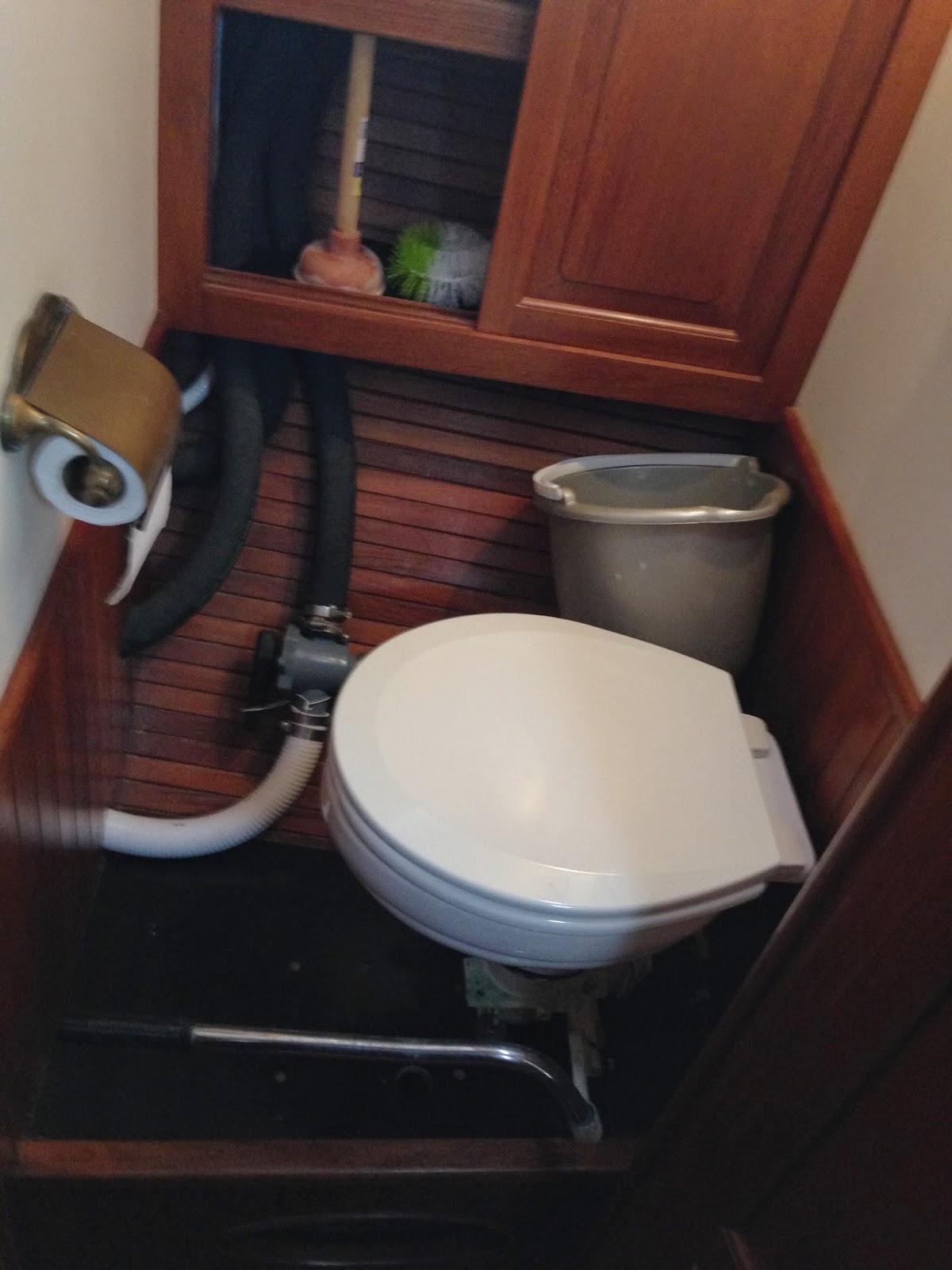 Appart from being oddly placed ladies don't care for pumping for some reason.   So we decided to move the head to a better location and convert it from a manual to an electric flush.  We hired Gary from our yacht club to do the work.  We aren't all that good with wood, and he's a master.

The first step was finding a place to put it.  Most Han Christian 38MKII have the head in the bow of the ship.   Usually the head is in a small locker of it's own and shares the space with the shower.   We liked the idea and had ours moved there.

The second step was to pick out the toilet and get a plan to build the box around it. 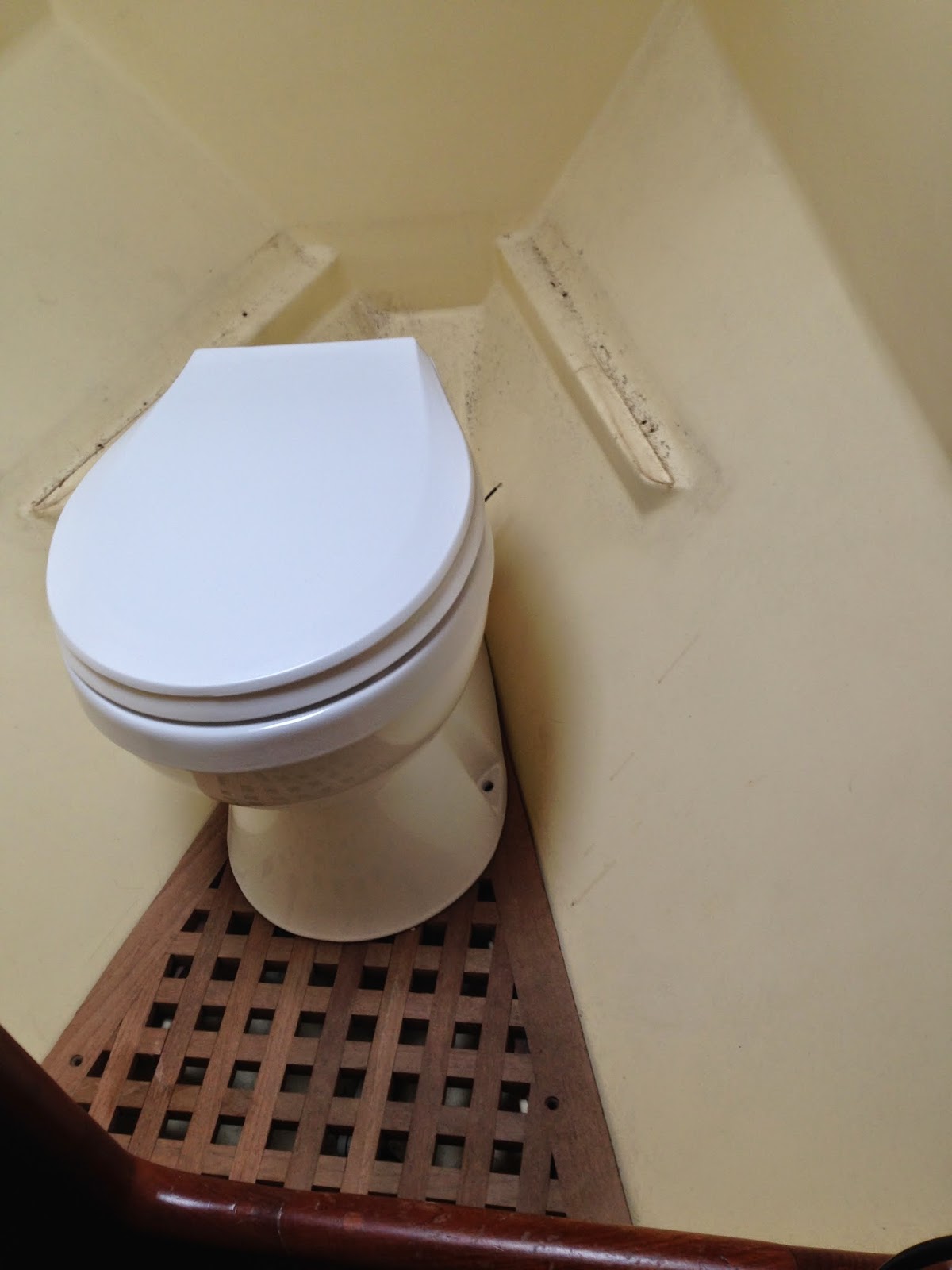 As you can see there was a good fit and plenty of room on the shower floor to back the head into the bow of the ship inside. 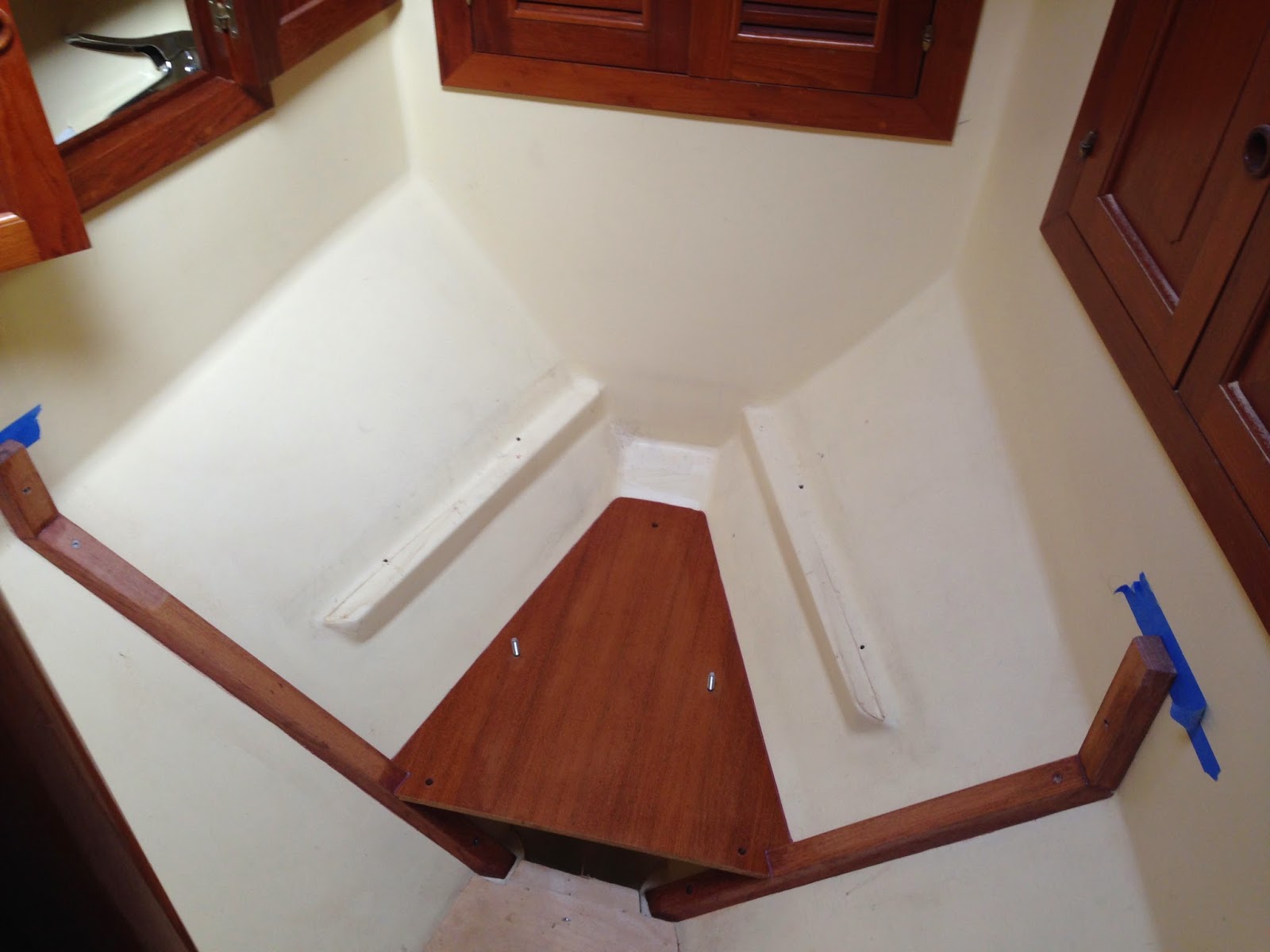 The next step was to fit the toilet into to the bolts as shown below. 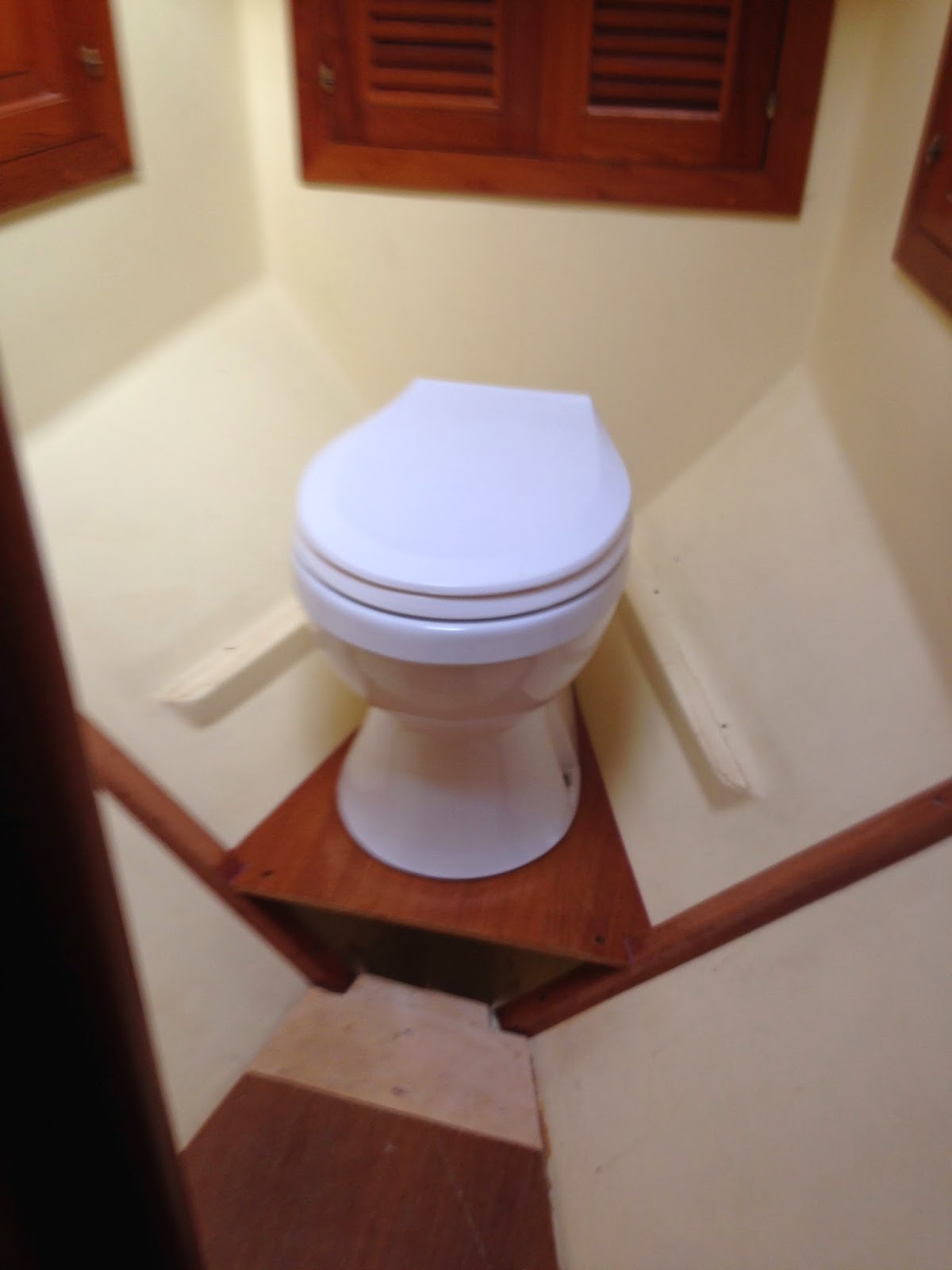 With the toilet in place Gary constructed the box around the toilet.  He used the batteries as weight to keep the pressure on the pieces as the epoxy cured. 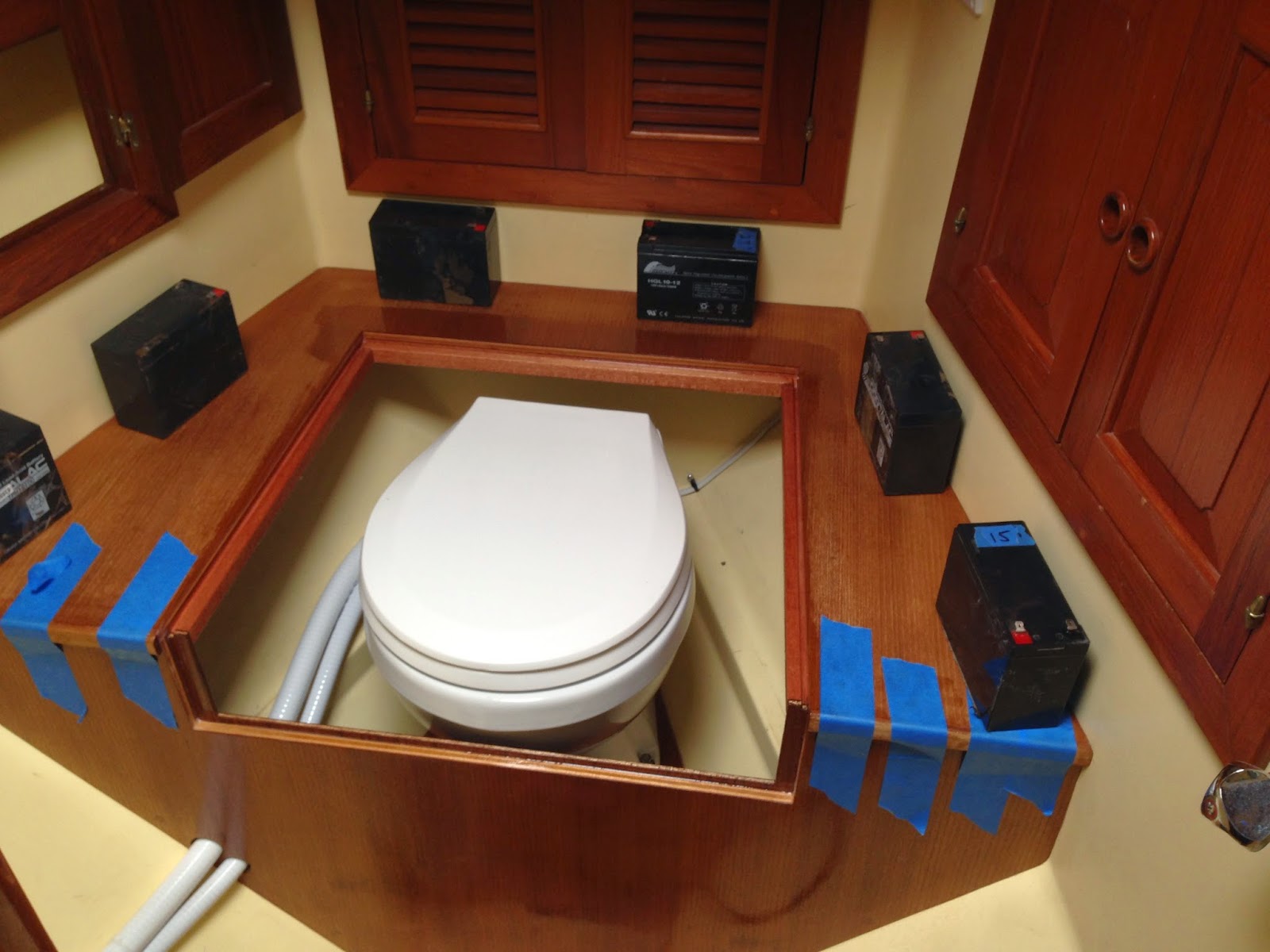 Finally a lid was built for enclosure, and the last item of a brass plaque reading W.C. was added. 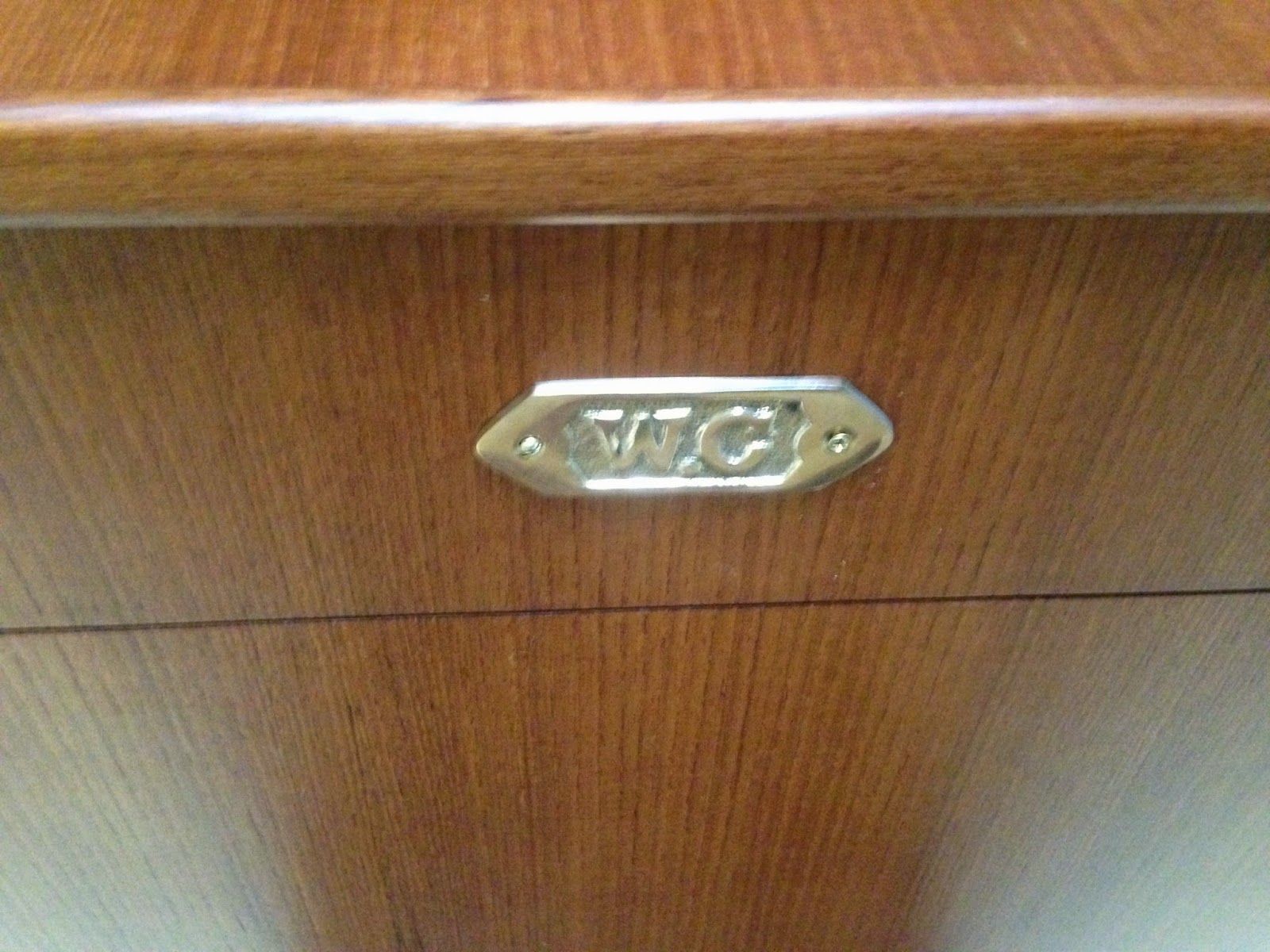 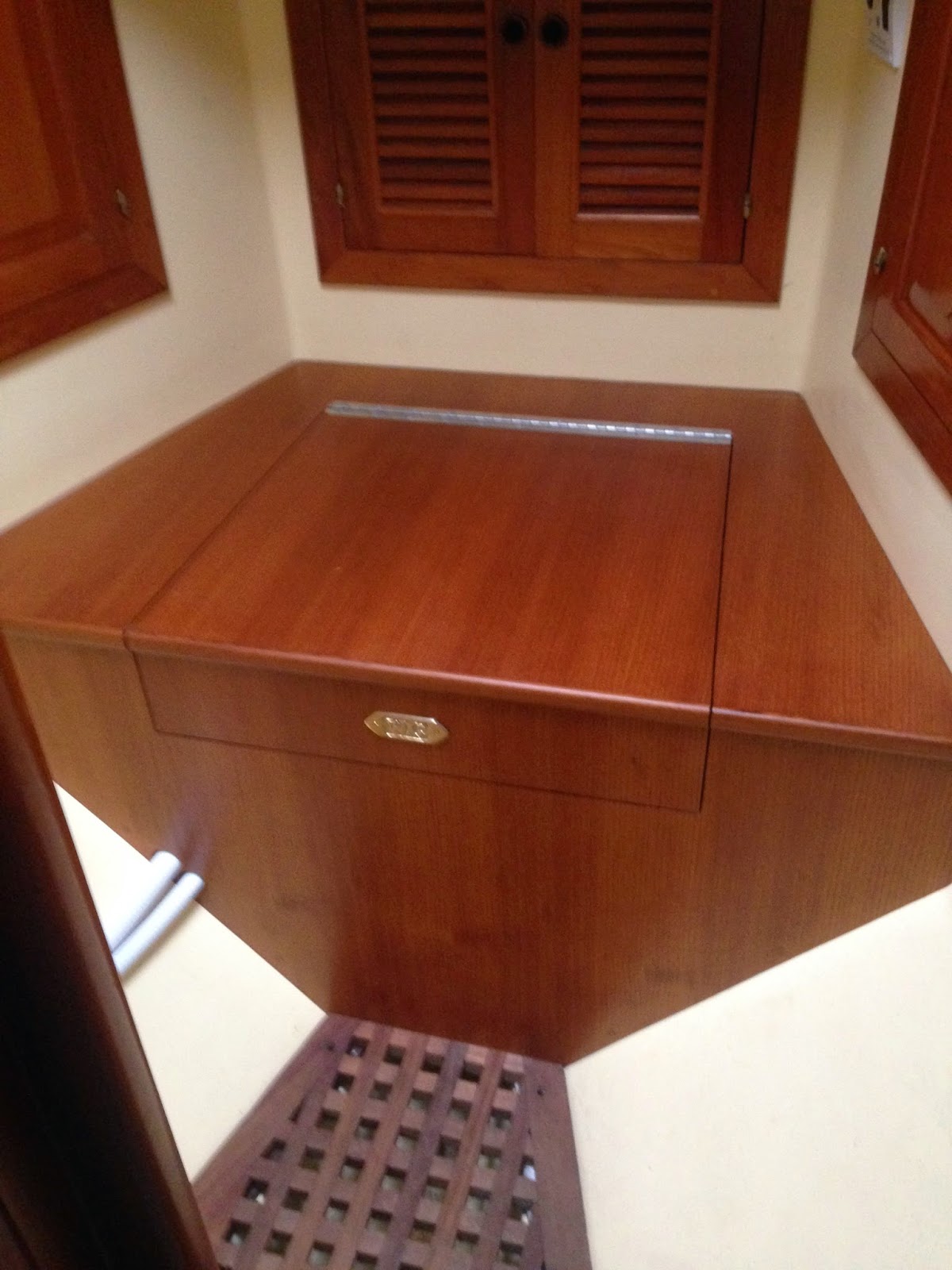 Several coats of epoxy were added to the box to keep it waterproof with the shower being in the same room.

Numerous people said that it wouldn't be useful at sea because  you'd bounce around to much to use it.   After traveling to Barkely Sound and back I would have to say they were all wrong.  it worked out very well.   Also sitting on the box while showering was also helpful, and comfortable, both at anchor and at sea.  I am extremely happy with the way it turned out.

The nice thing is now we also have a large closet on the boat!!

After loading up with supplies from the Co-Op we set sail outside of the Ucluelet Inlet up Loudoun Channel toward Pipestem Inlet.  The entire way up was about 13-15 miles, not very far considering the journeys a couple days before.   The problem was there are underwater rocks everywhere just below the surface that would wreck a boat, and none of them are marked on the water, just in charts.

Finally, about 4:30pm, we tucked into an anchorage behind Bazett Island.  I noticed two things right off the bat.  First the reason brown water was flowing from the side of the gunnels was the holding tank was full.  And second the reason my chart plotter wasn't showing the area correctly was I hadn't changed C-Map Cartridges.  Katie rushed out with the kayak and paddled around the area a while.

After dinner we got out the dinghy's and looked for a way to get into the hot springs. 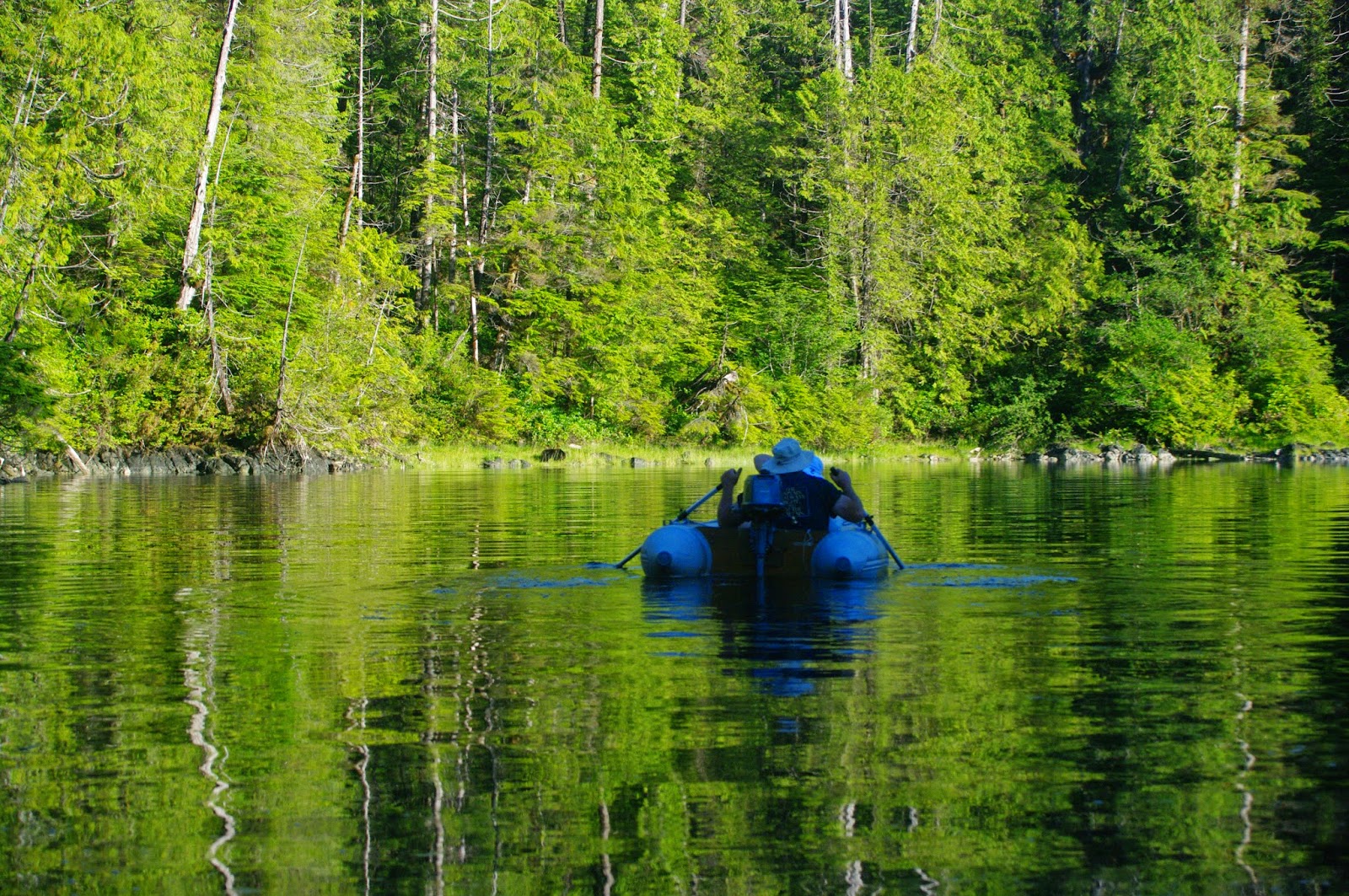 Instead we found another inlet where we watched a bear from a healthy distance. 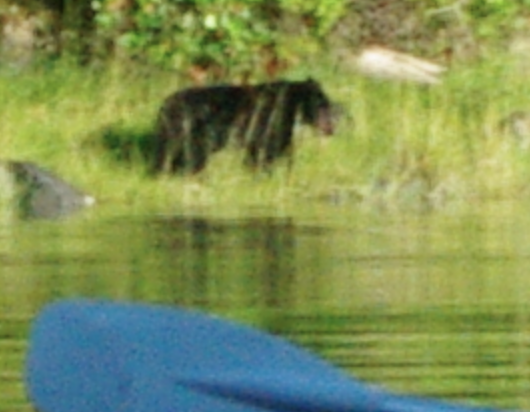 A man lived on a small island as we went into the inlet.  He said he'd not talked to another person in about 3 days.  He had some set up on his small rock island as you can see below. He was nice enough to direct us to Luck Creek's waterfall across the inlet. 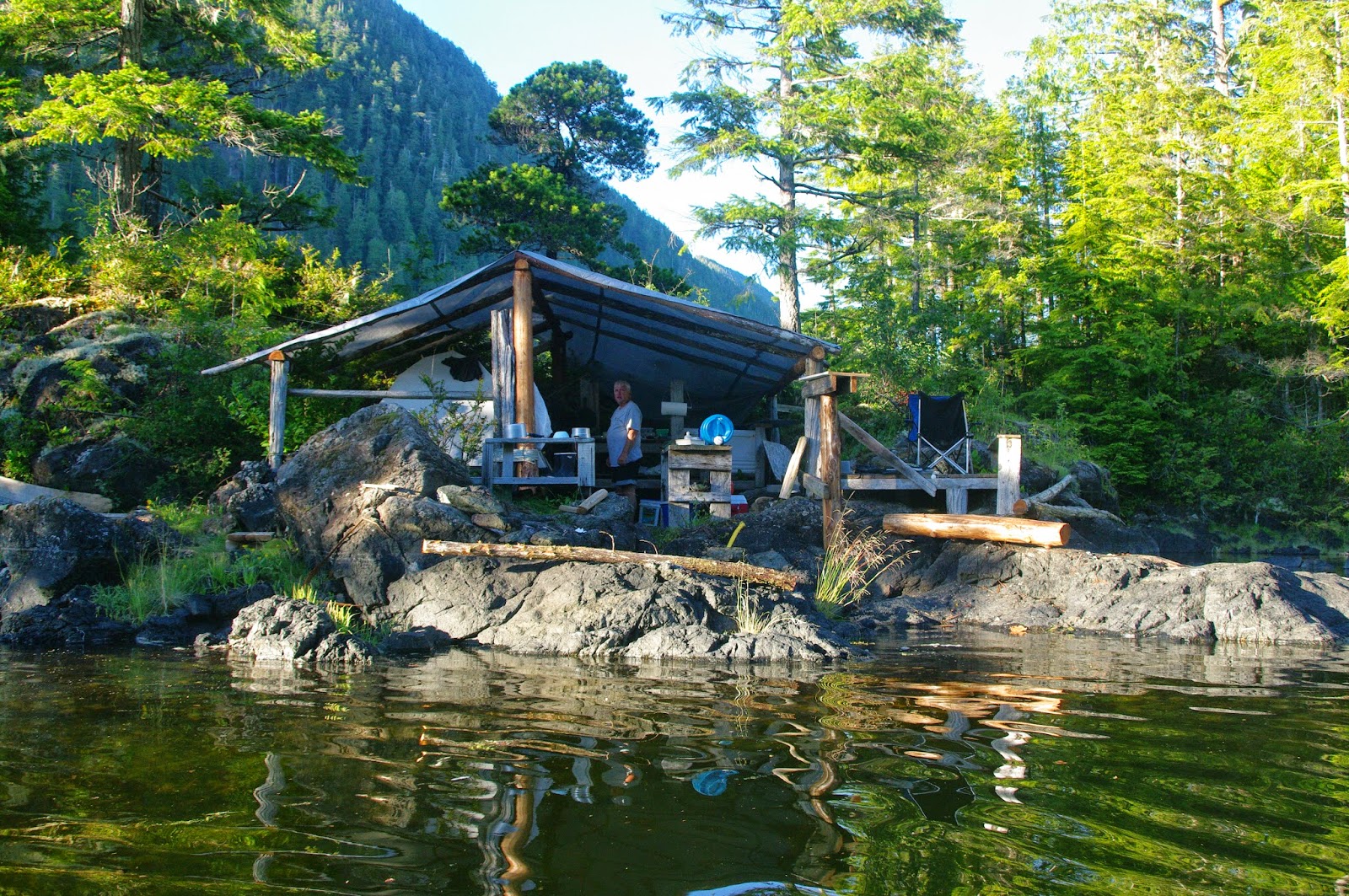 Lucky Creek was about a mile long before you reached the waterfall. 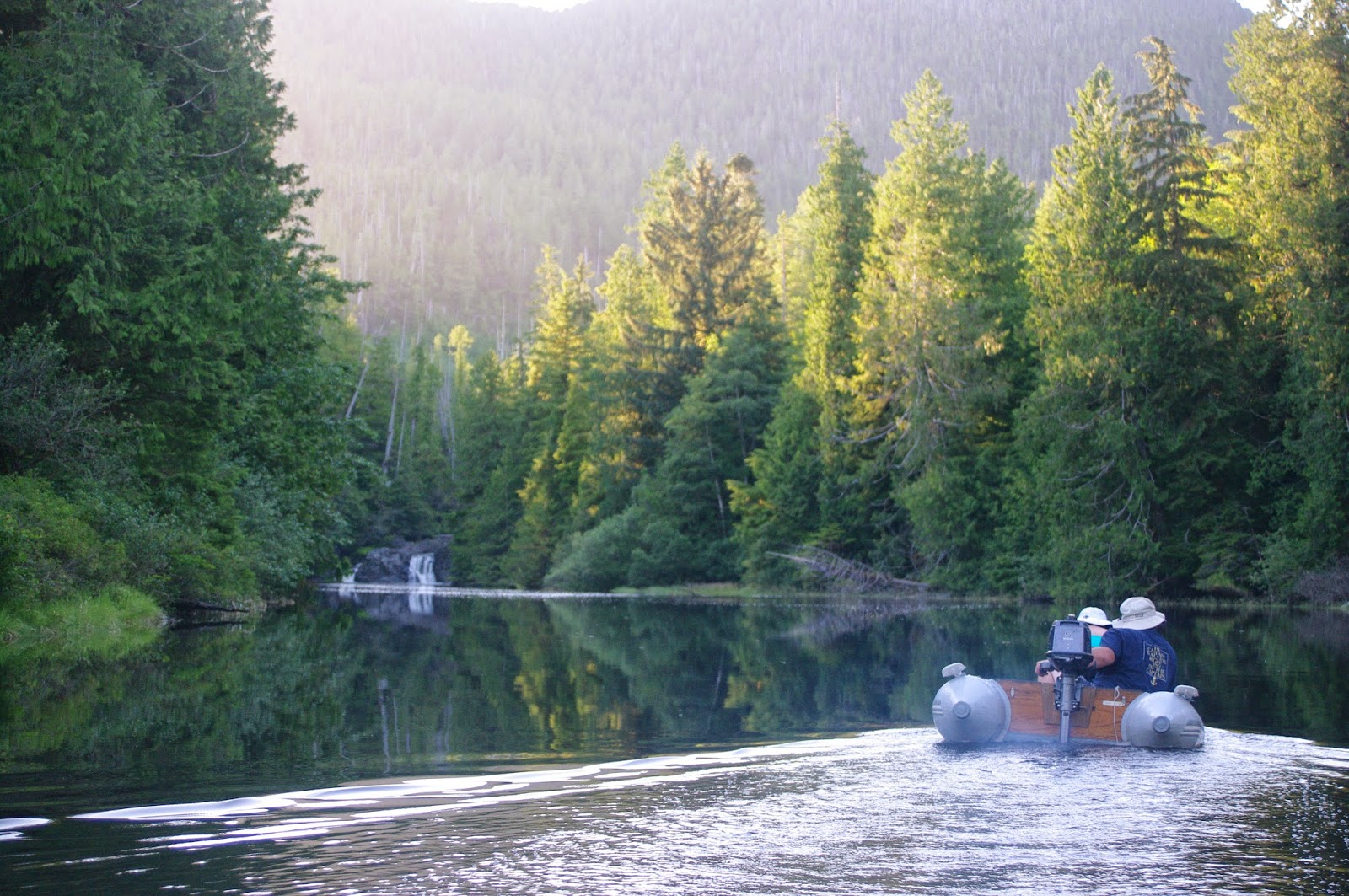 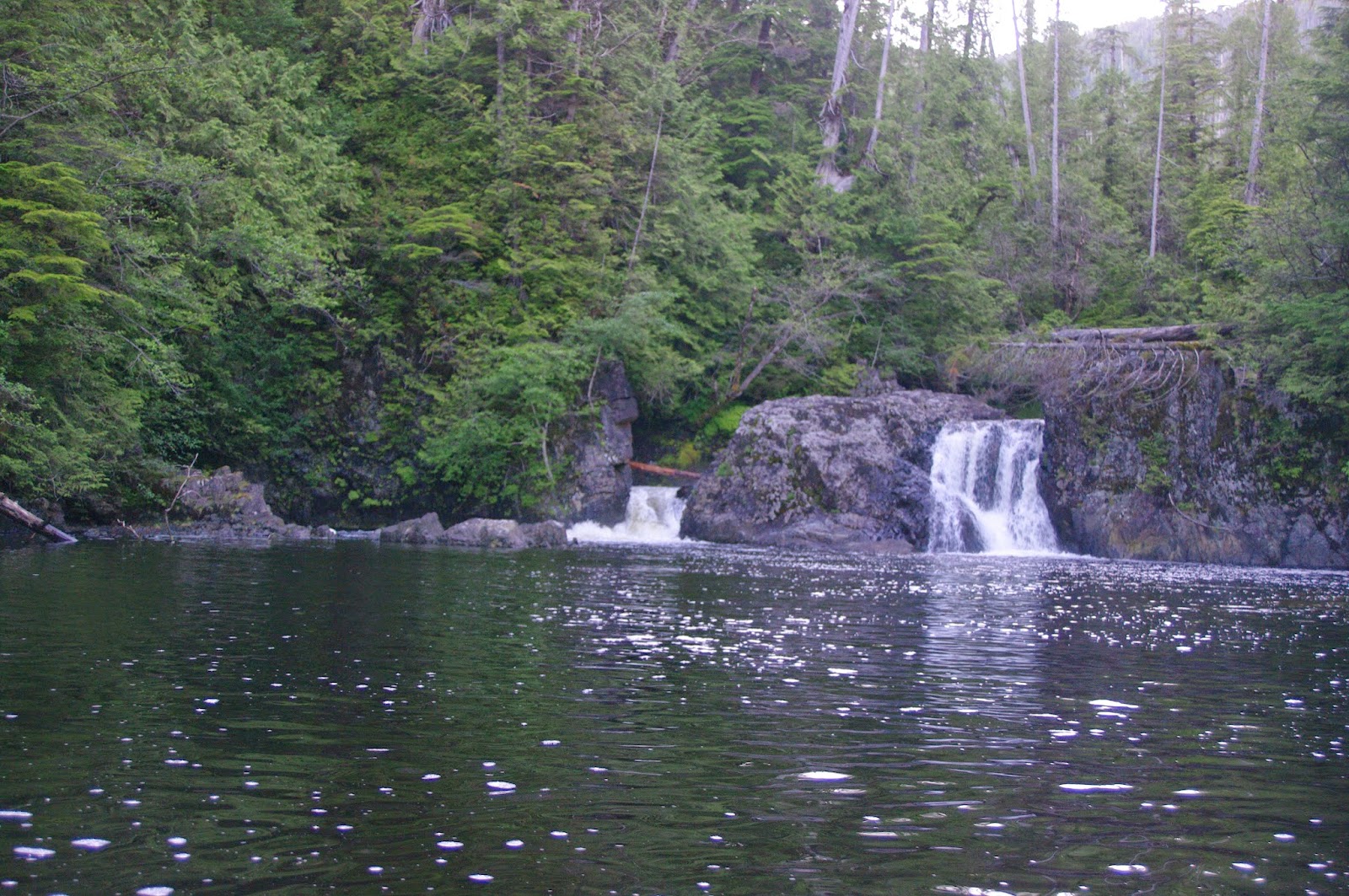 After our dinghy ride we returned to the boats, had a night cap and went to sleep.


The next day we split up with Rowena.  They went down to Effingham Bay in the Broken Group Islands, and we went back to Ucluelet to pump out the holding tank.  We motored down to Ucluelet, but the winds had picked up to 20 knots inside the inlet by the time we arrived.  We couldn't find a pump out station, so we joined Rowena in Effingham Bay. 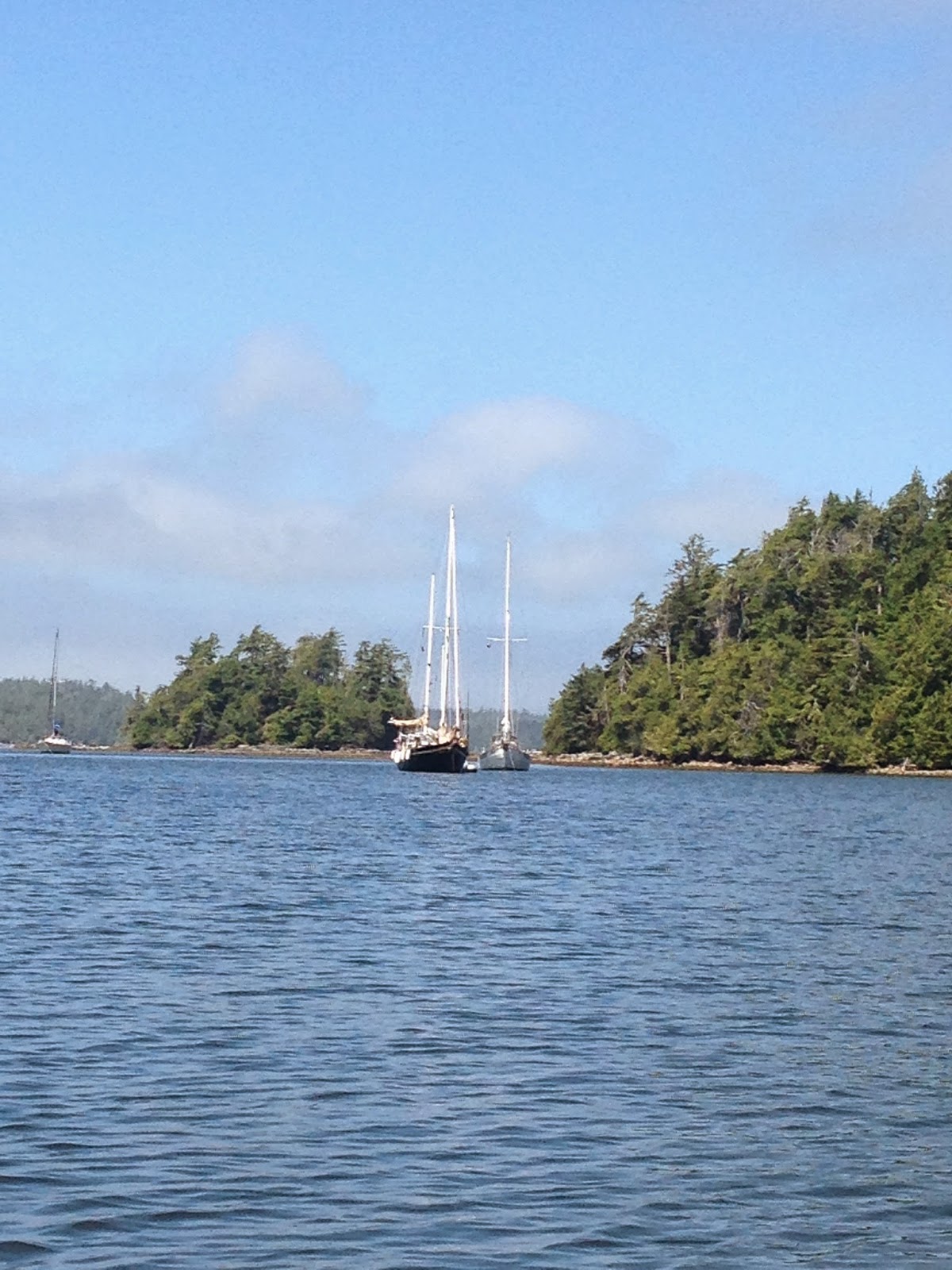 The anchorage was crowded and had a steep bottom.   The anchor didn't bite at first, so we ended up doing an anchor watch all night.   The next morning we took another dinghy ride after breakfast. 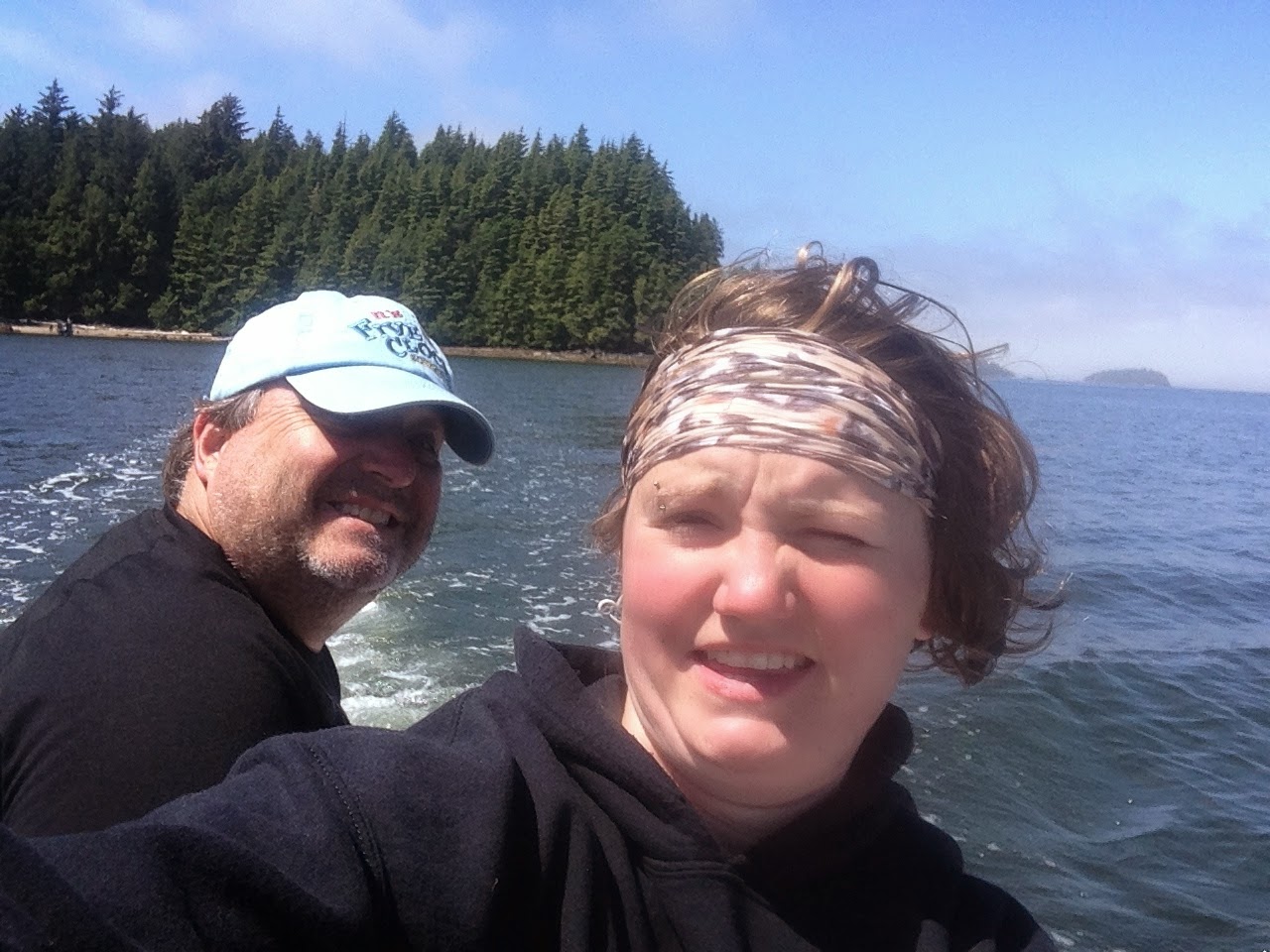 Afterward we hoisted anchor to head off to Flemming Island, to stop at the Port Aberni Yacht Club's remote dock at Smuggler's Pass.

Posted by S/V CarolMarie at 9:34 AM No comments:

Sailing on a Reach and a Land Cruise

Once again we took friends out for an afternoon sail on Saturday.   The weather didn't cooperate, winds out of the ESE making the trip a reach each way between the I5 and I205 bridges.  We caught a rare glimpse of a catamaran on the water here in Portland.   This one hails from Maryland, so it came along way to be running on the treadmill of the Columbia River. 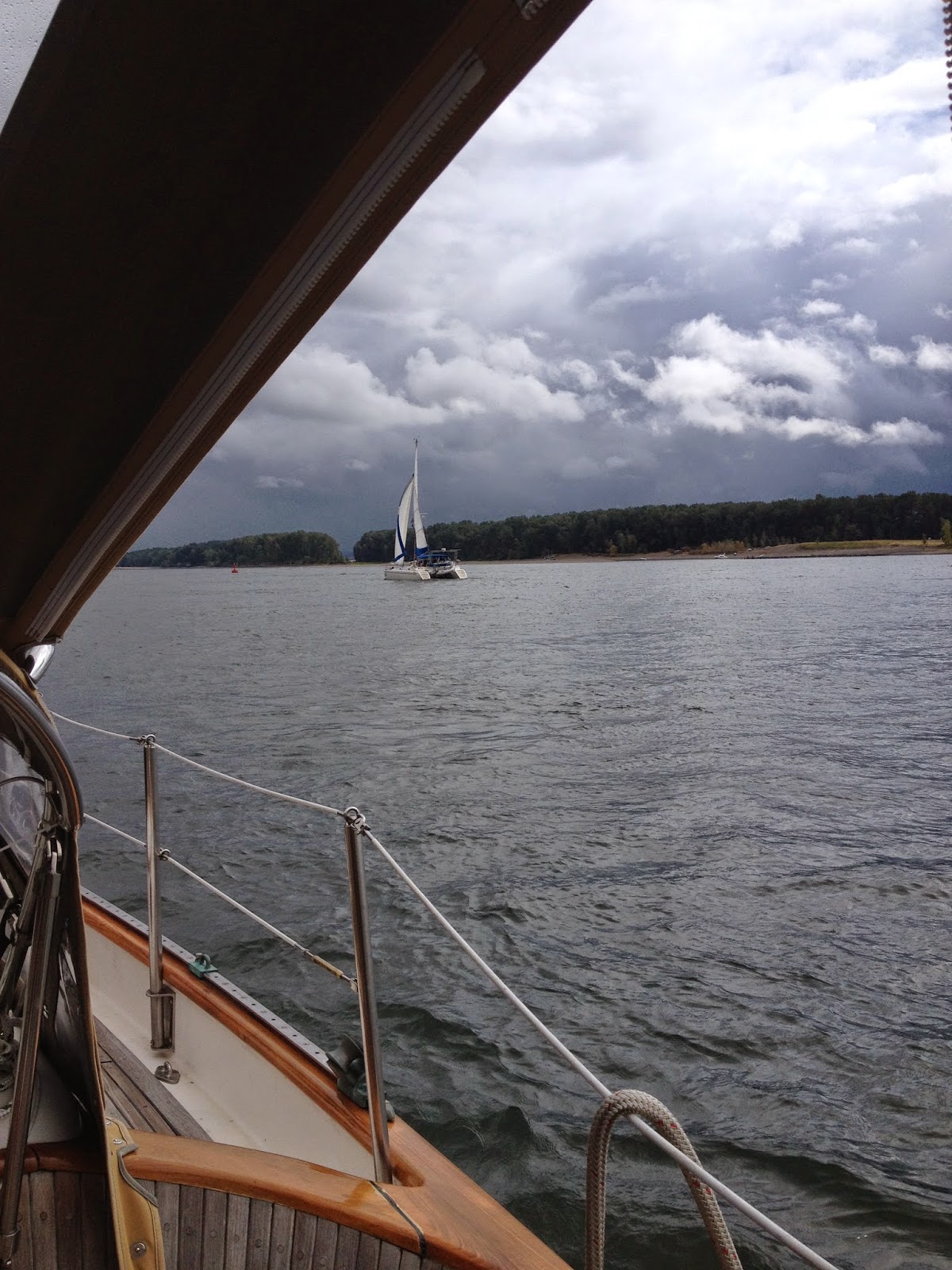 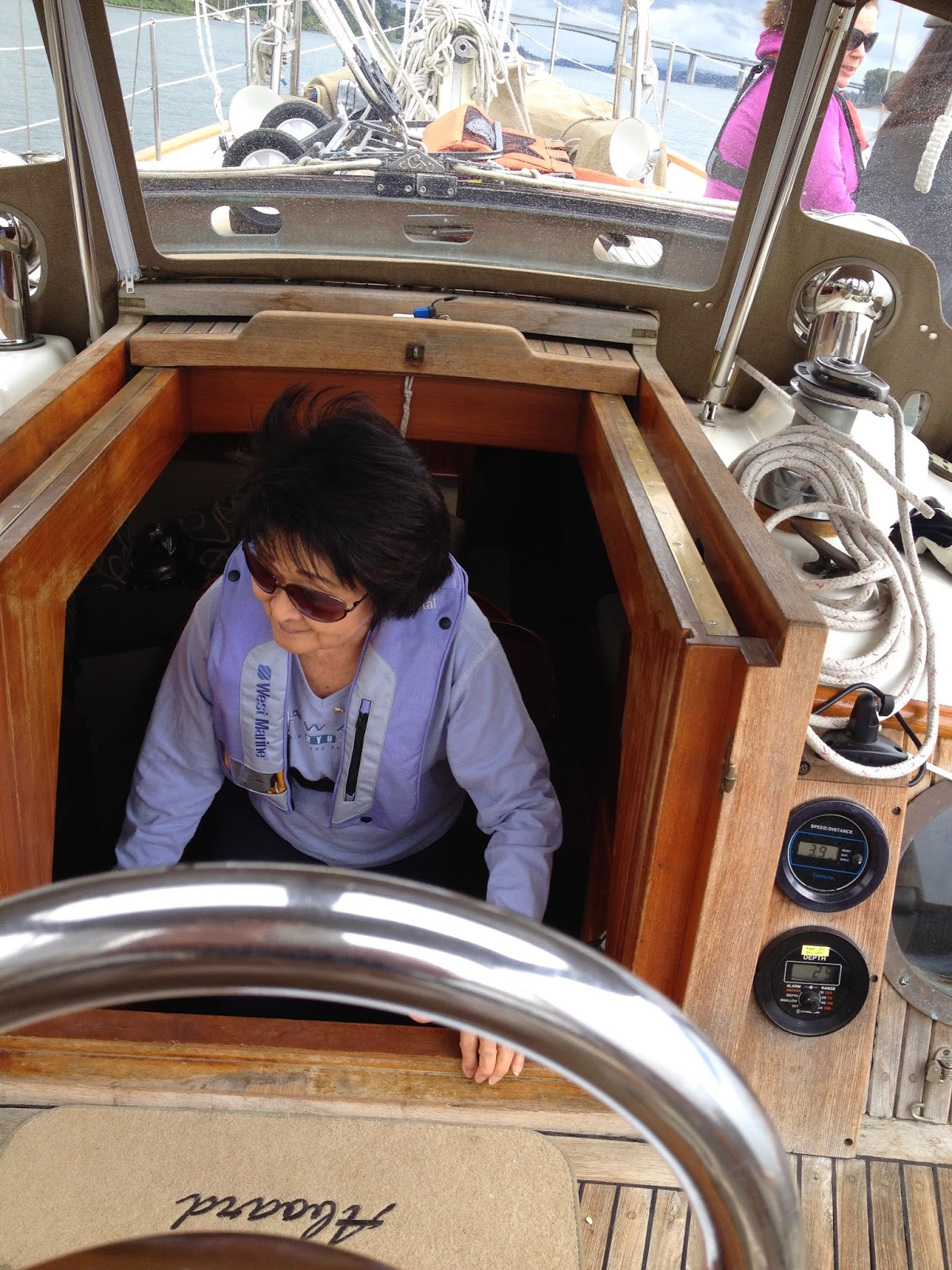 We did have a beautiful sunset which we caught on camera. 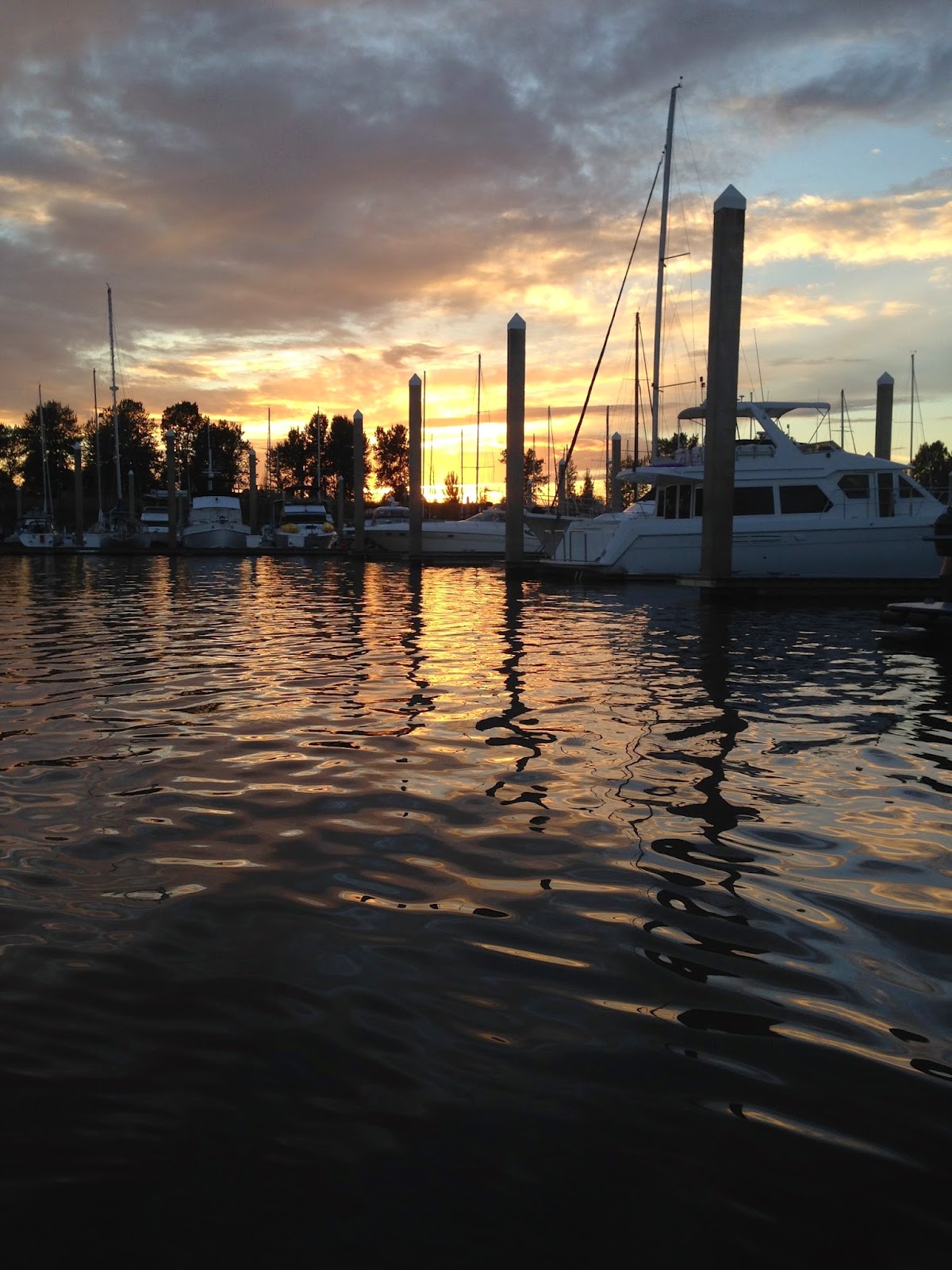 I did some maintenance on the boat too this weekend adding a couple of lights which were missing.   The first light was over the chart table, enabling lighting of the switch panel and chart table. 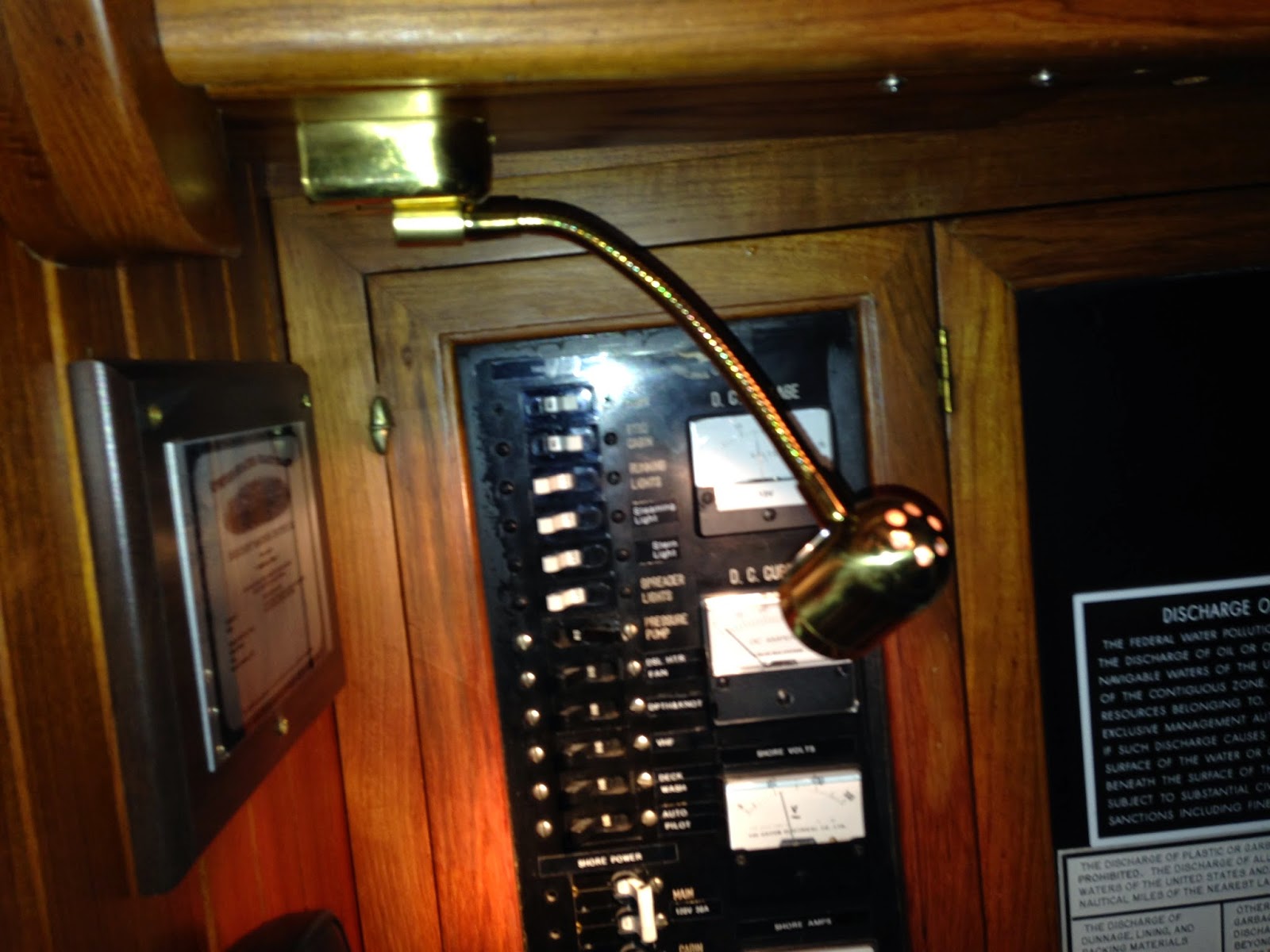 The second light was in the hall over the forward closet. 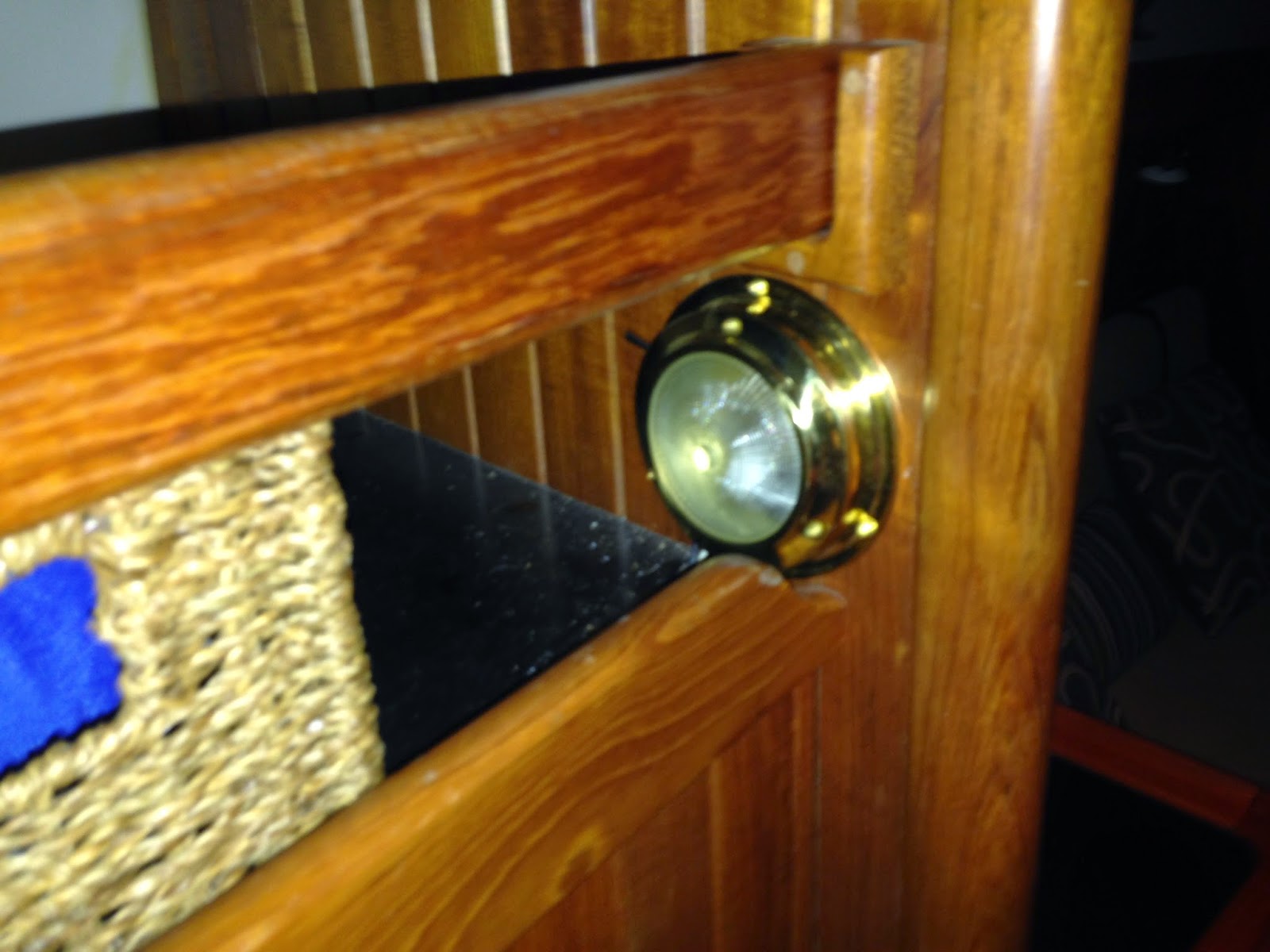 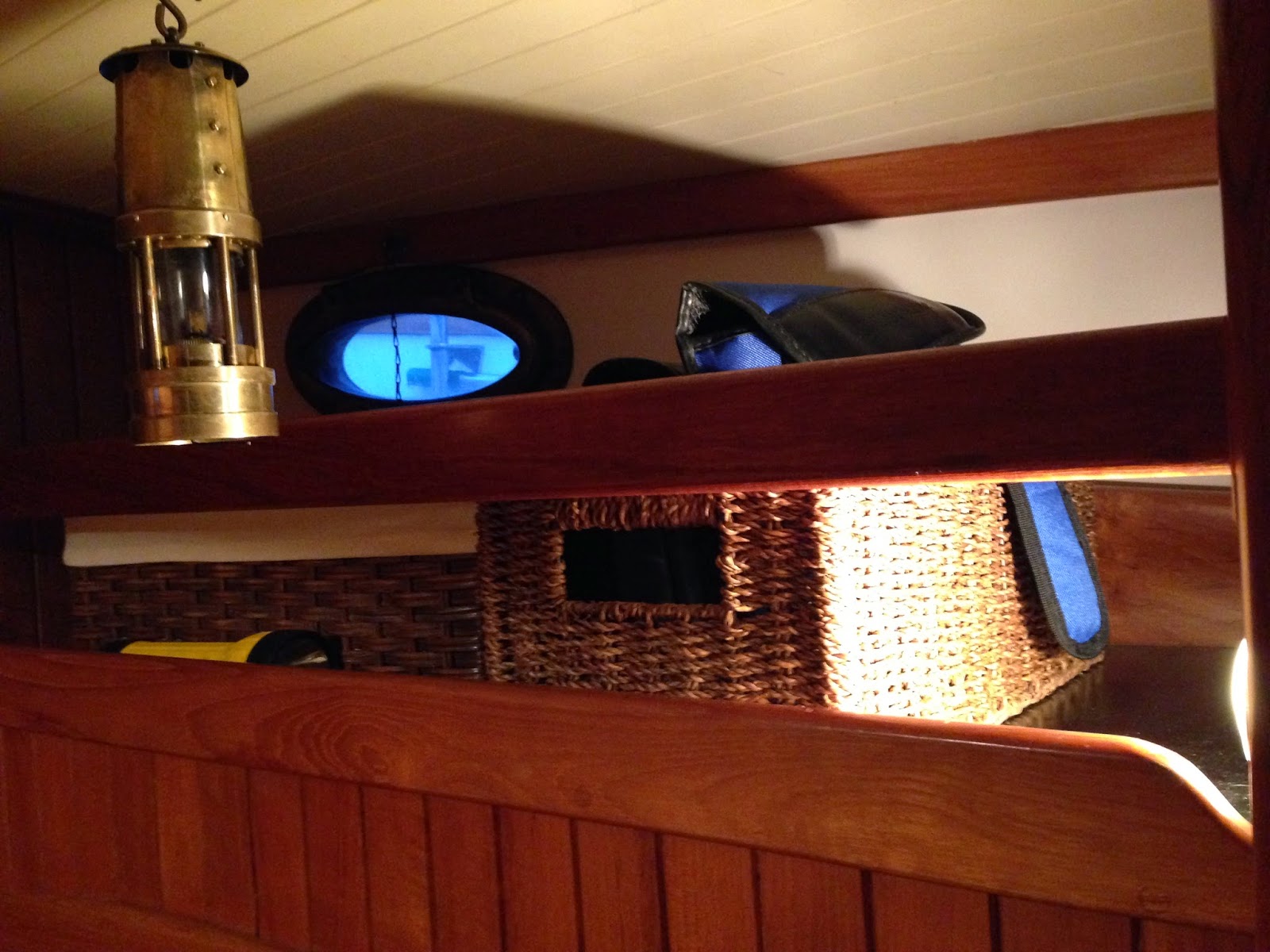 Finally this weekend we took off for a land cruise to meet Ray and Alicia for the day in Lincoln City, Oregon.  We found a giant there which we took a photo with.... 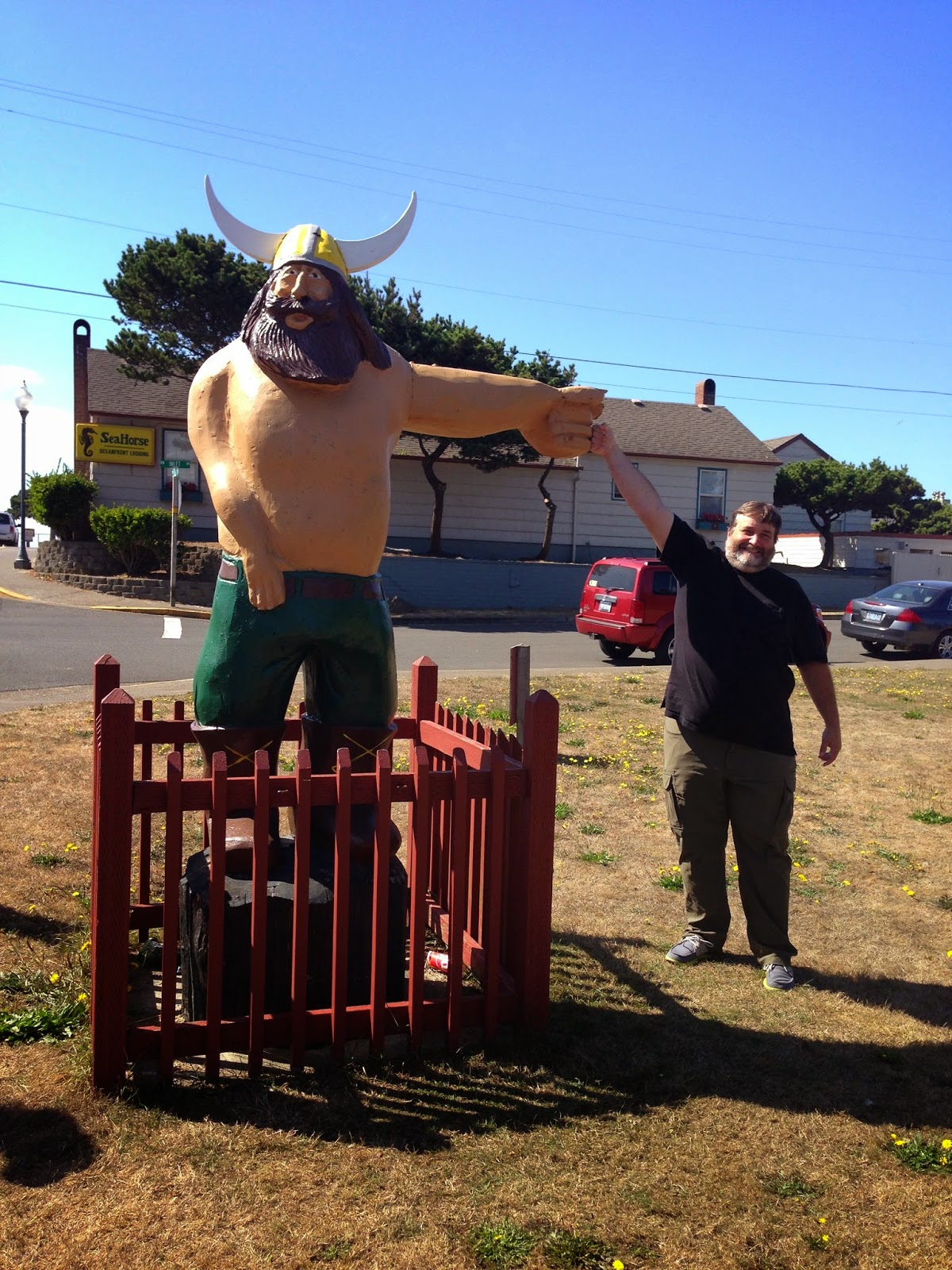 Apparently the small fence keeps him captive year round. 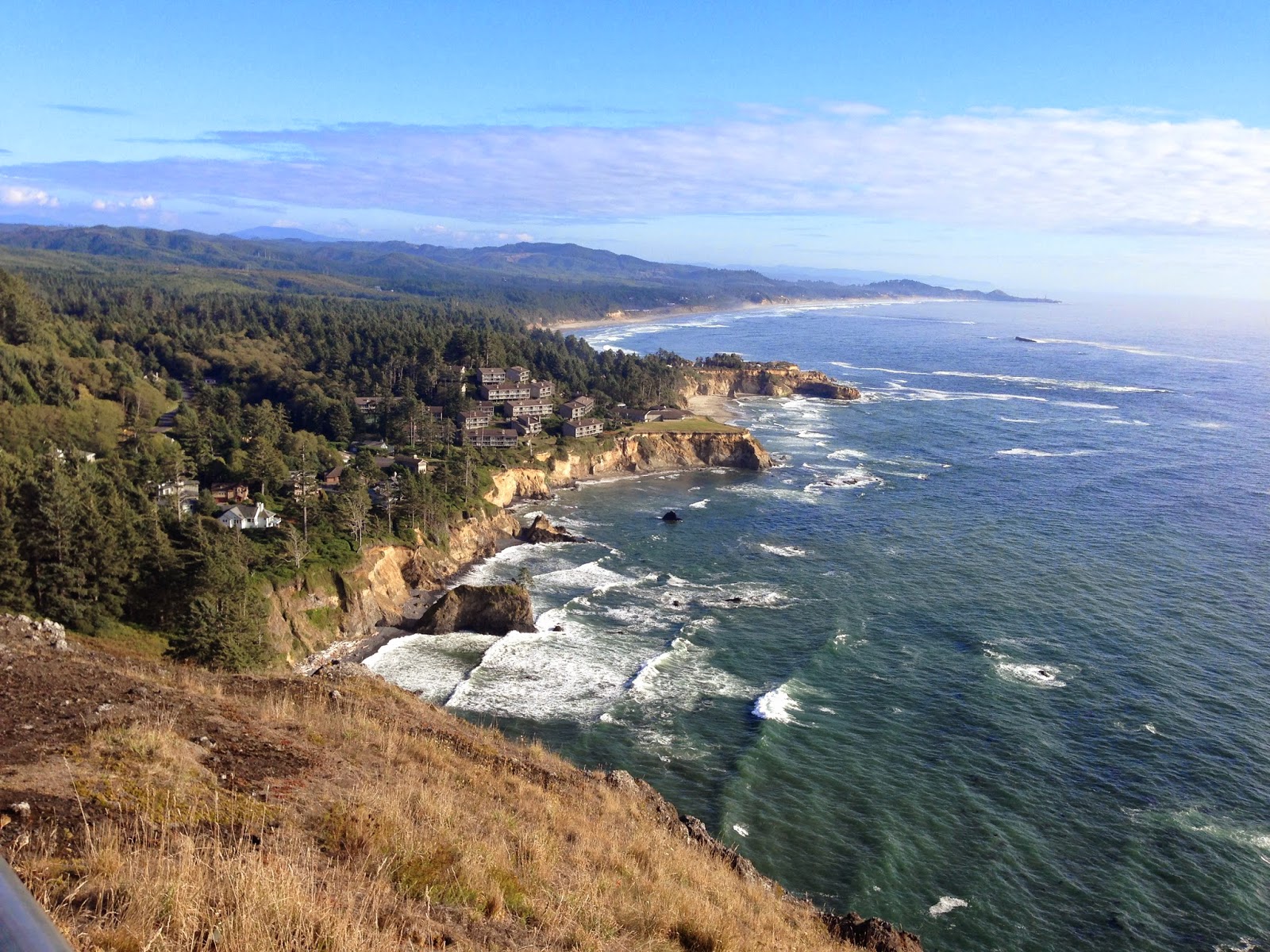 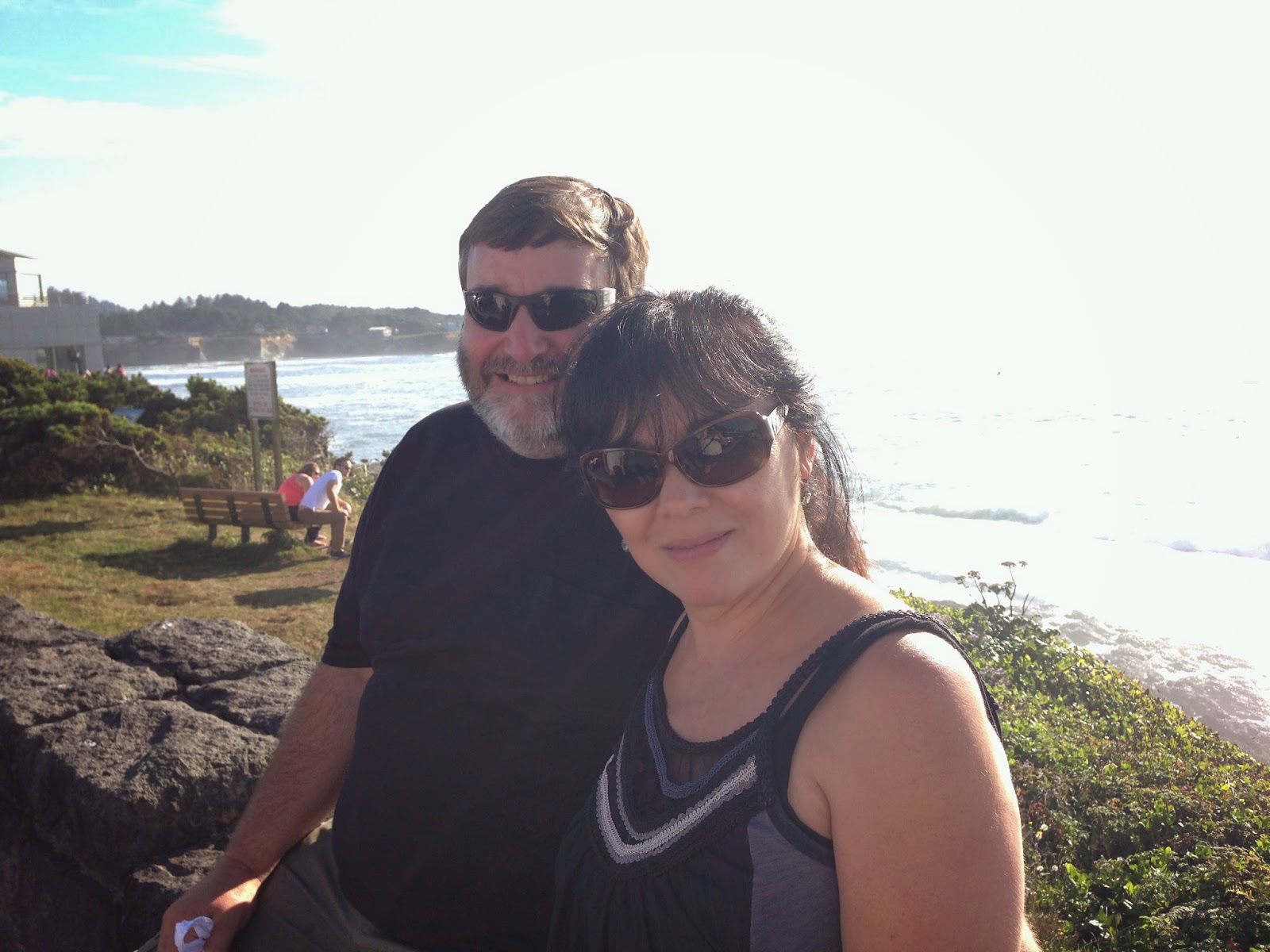 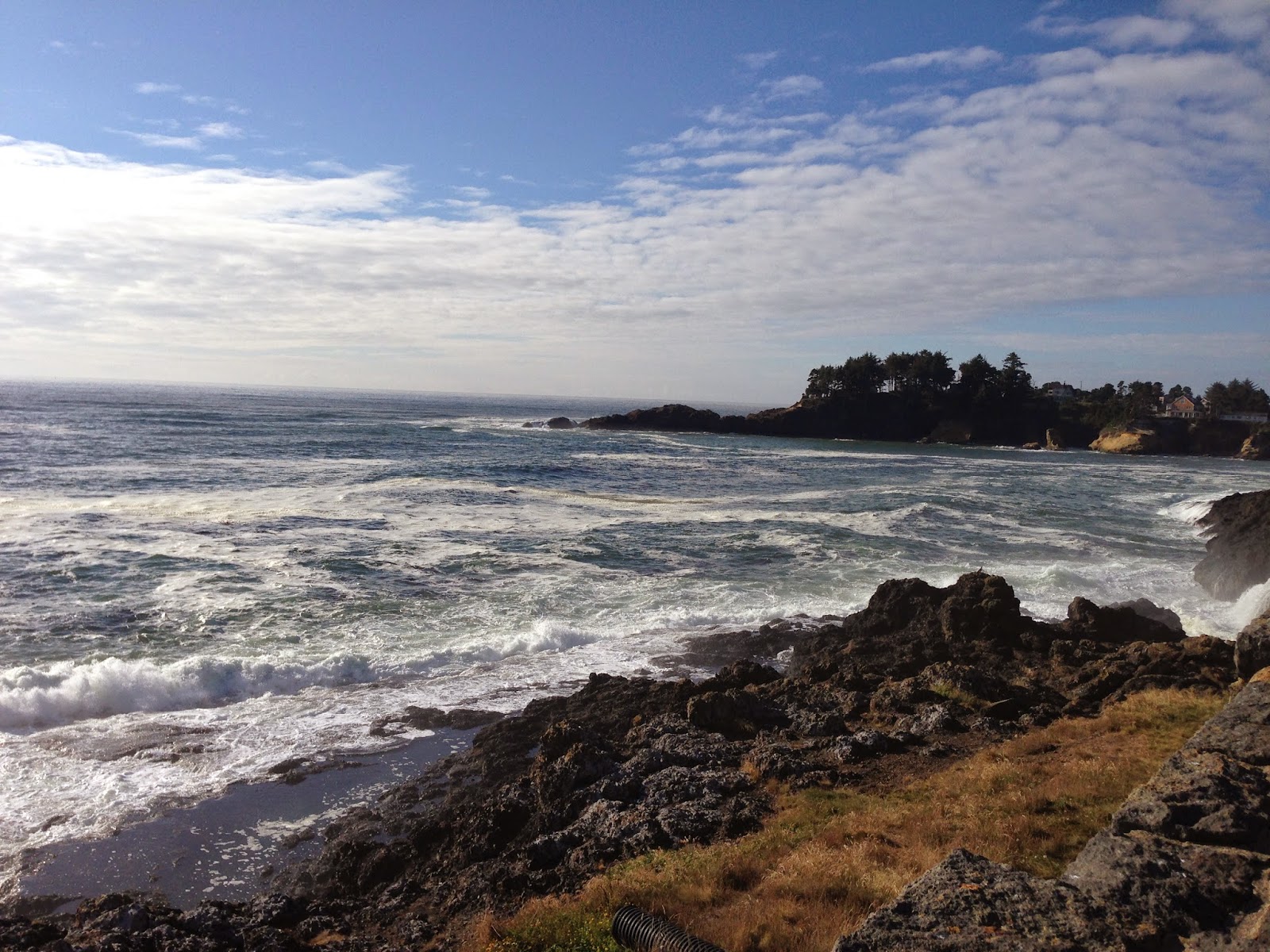 Lincoln City has several good kite shops and flag stores.   We could resist to pick up this one for the annual Halloween Cruise. 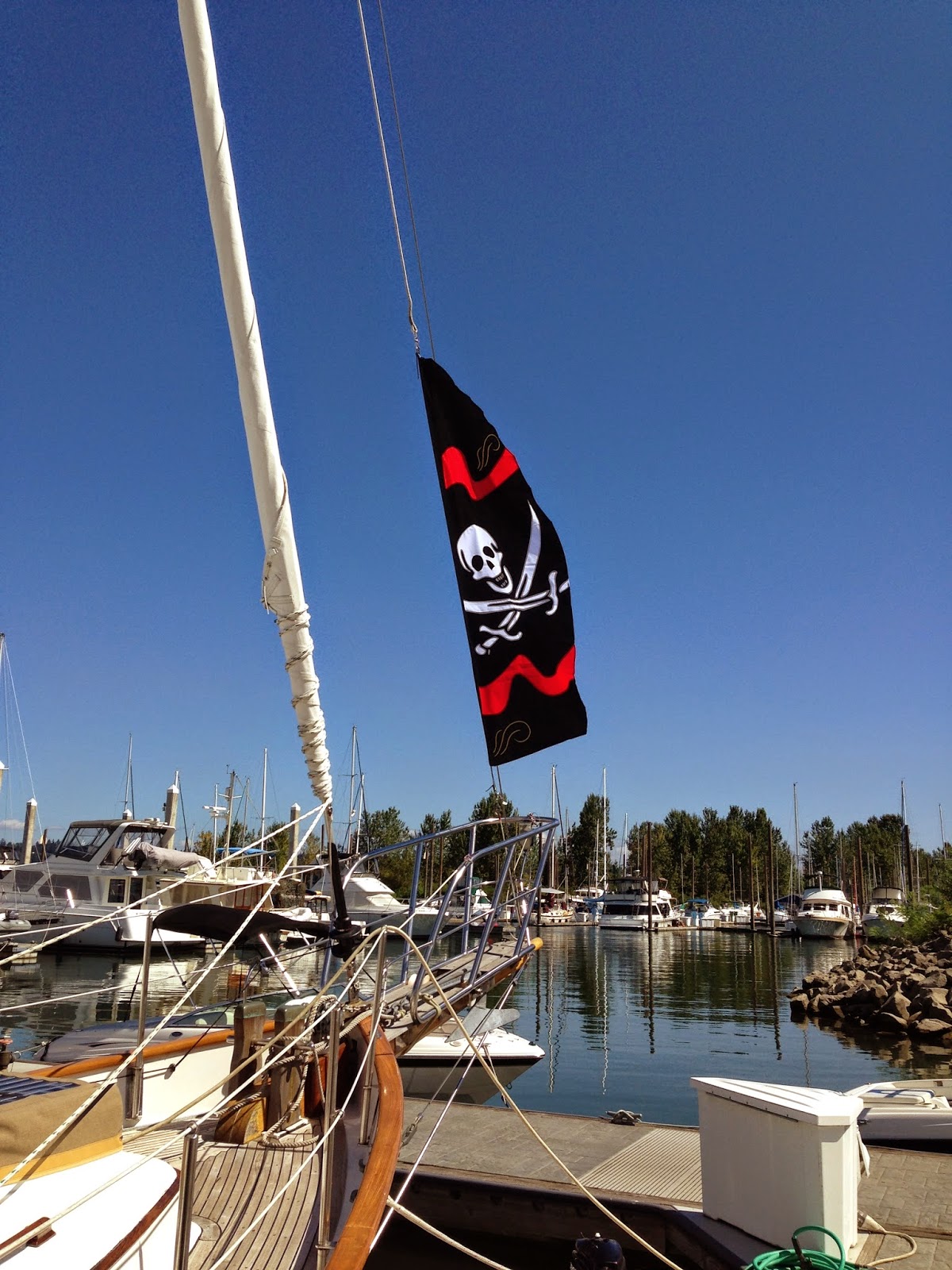 Isaac and I made a lanyard from stainless cable that runs through it.  We attached the two looped ends to the pendant on the bow and the jib halyard.  The flag is over 9 feet tall, making it look like a rogue black sail.  Thanks to Ray and Alicia for the great day out in Lincoln City.

Posted by S/V CarolMarie at 6:20 AM No comments: