This weekend Ray McCracken and Alicia Watkins came down from Portland for a visit and break from the rain.  Ray is the current Commodore of the Sauvie Island Yacht Club, and Alicia has long worked on the newsletter and been a great friend.

After bumming around the tall ships at the San Diego Maritime Museum we met up with other SIYC members George and Sue Stonecliff for dinner before their start in the 2017 Baja Ha Ha.  George and Sue own a beautiful yawl called the Julia Max. 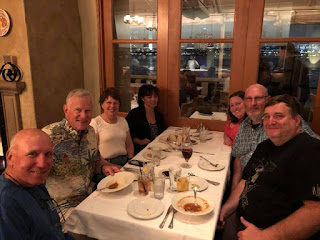 The next morning our plans were to follow them out of the Chula Vista Marina, and sail with them in the Baja Ha Ha parade through the port of San Diego.

This morning Charing and I met Ray and Alicia at the boat, with plenty of food and drinks. With any start on the CarolMarie, there are plans until she tells me otherwise.  Of course this was one of those times when we almost didn't leave the dock because she had other plans.  With all the lights on, shore power off I tried to start her up.  Of course that blew the two existing Class T fuses ($30/ea).  After getting them replaced, the engine wouldn't start.  Finally through some trouble shooting I checked the battery terminals, they were all lose enough the charger wasn't charging them correctly.  After locking them down, and 15 minutes of shore power charging, she started.

We motored out of the marina about 45 minutes later then planned, the Julia Max was already under the Coronado Bridge, about 6 miles ahead.  With the motor, tides and wind in our favor, we unfurled the 130% jenny and we took off at 7.5 knots over water.  In no time we'd caught up with the Julia Max.


It wasn't long before the entire Baja Ha Ha fleet had surrounded us. Over 150 boats had registered this year for the 11 day run to Cabo San Lucas, Mexico.  One look at the tight quarters shown on the AIS gives you a feel of the pack.  Only about 1/3 of the boats have AIS transponders though, so imagine the photo below with 3 times more boats around us.  We are the little white boat on the screen with the red and green bow.


We listened to Channel 69 as the Grand-Pooh -Ba directed all boats to get as close together as possible because media including CNN were on the committee boat taking pictures.  Suddenly we found ourselves locked into formation of a flotilla of slow moving boats approaching the starting line.

We found a sister ship amid the flotilla, another Hans Christian 38, called Amistad.


It wouldn't be San Diego with out having the U.S. Navy delay a day's sailing.  With just 4 minutes to start the Grand-Pooh-Ba came on the radio saying the start was to be delayed and he'd call for a one minute warning to the start after a Navy warship had past the flotilla.

The fleet began to break up a bit giving me the chance to turn and slow down as the Navy did their thing.  Julia Max surged ahead as we drifted to the back of the fleet.

The one minute warning was given, the count down began.  As the minute closed, I never heard the starting gun go off, but I did hear more and more boat horns, and cheers.  The 2017 Baja Ha Ha started, and the CarolMarie, even though in the back of the pack passed by the committee boat.  Shortly afterward we turned around and headed back for the marina.

Charing and I sat in the cockpit and listened to the roll call of the boats crossing the line.  When the Grand-Pooh-Ba called out "Julia Max", we heard our friend Sue reply, "Julia Max - three souls aboard."  Charing and I looked at each other, with watery eyes and sighed.

Good luck Baja Ha-Ha 2017 Fleet - fair winds and safe travel to you all.

Movie of sounds and horns at the start